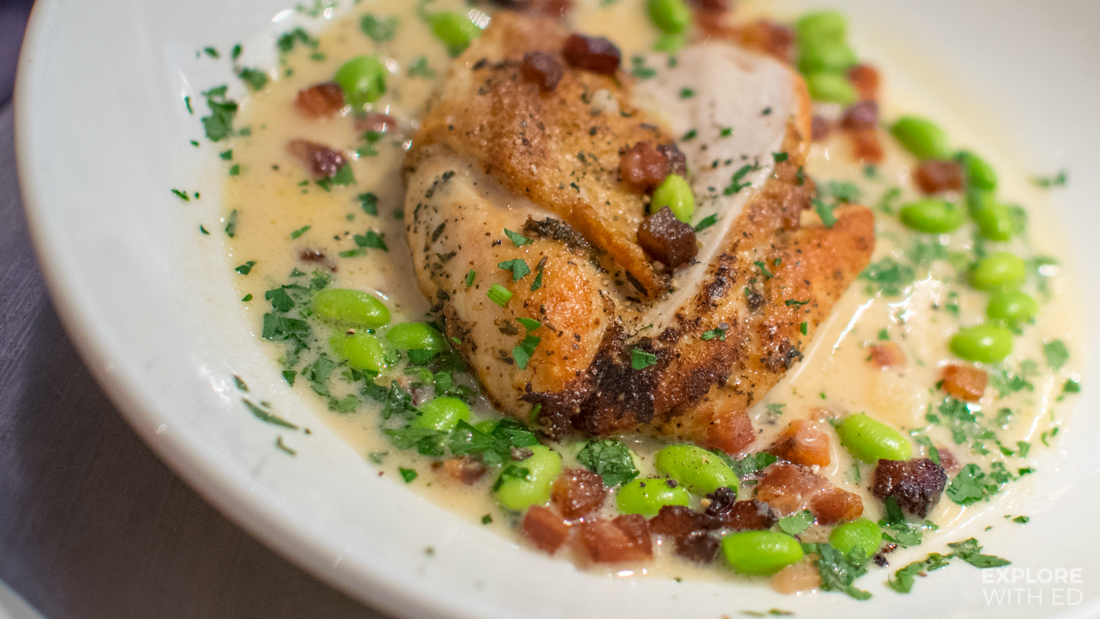 In this post I’m sharing some of the new Spring and Summer menu at Bistrot Pierre’s in Cardiff, as well as a free drink code if you’re planning a visit too! 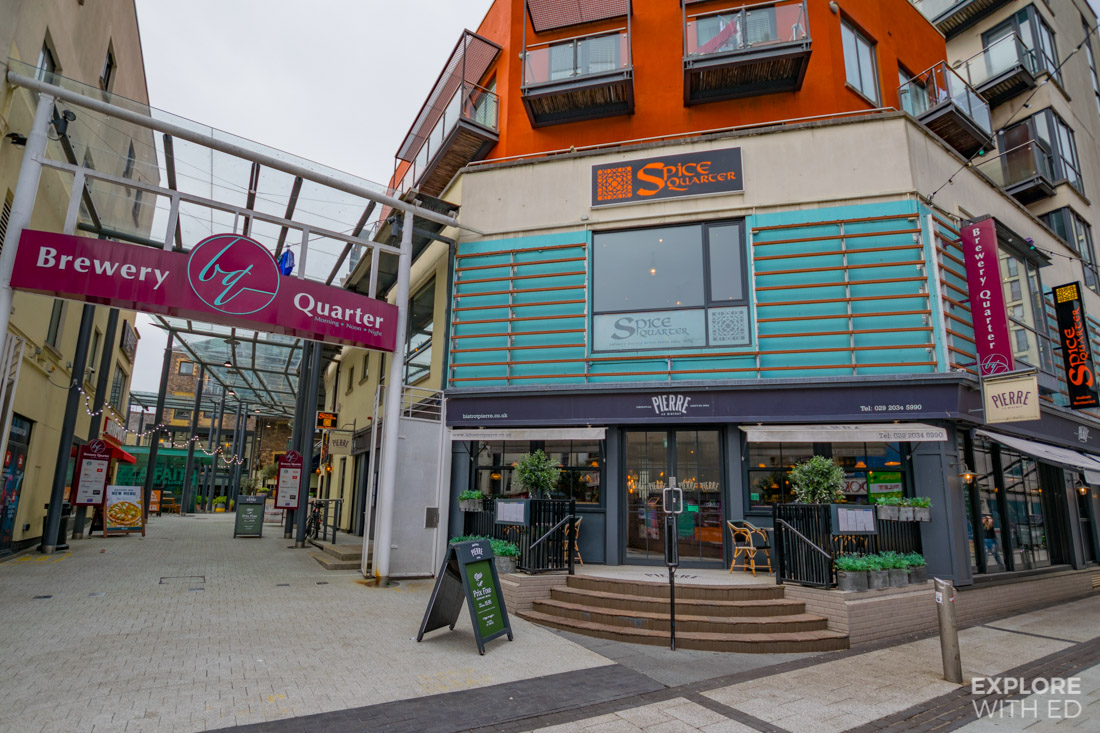 “Je’taime Paris, tu me manques…”
The last time I was in Paris (besides Disneyland last summer) was in 2010, there’s a magic about the city that’s hard to describe, you just feel it in the air as you stroll along the Seine, I can still picture those views now as if it was yesterday… 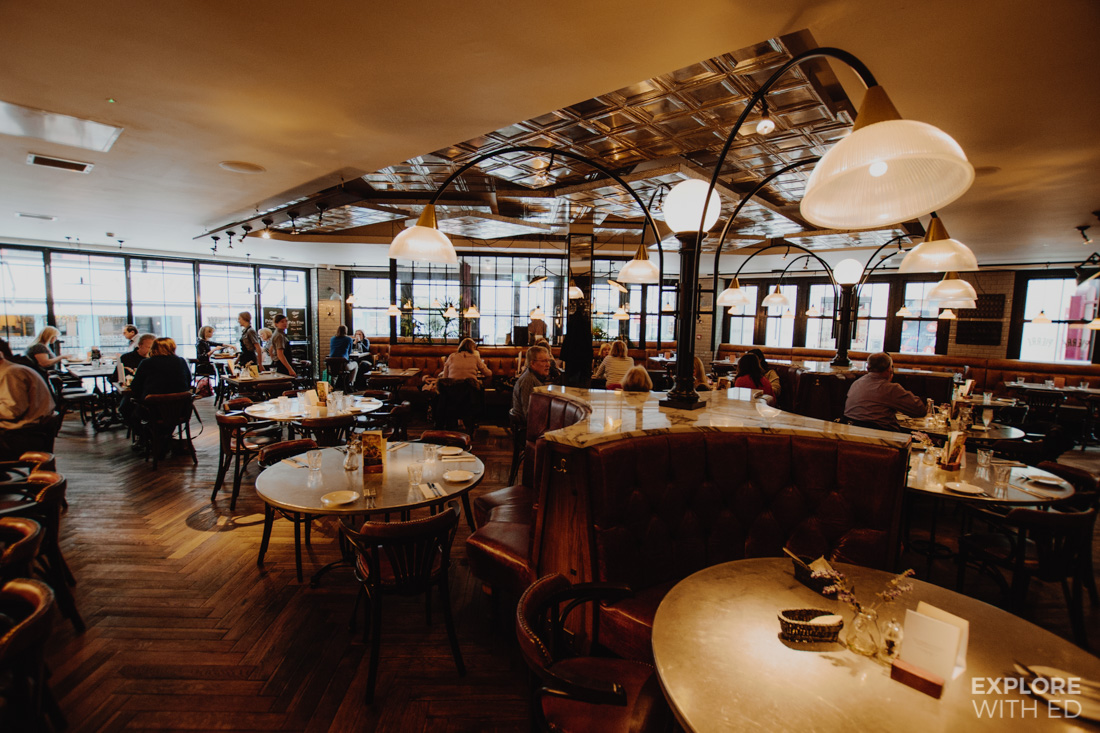 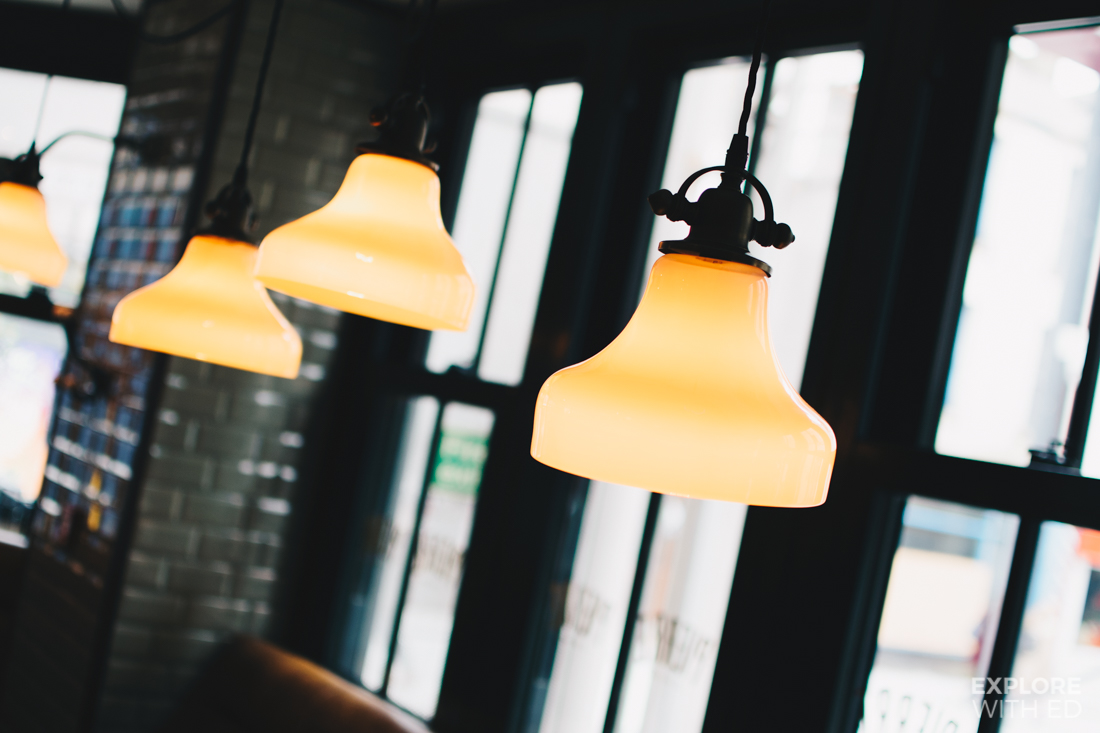 Remarkably, these rambling thoughts came rushing back to me after a visit to my local Bistrot Pierre’s in Cardiff, a restaurant that sits on the edge of the Brewery Quarter and celebrated ‘chippy alley‘ (Caroline Street to non-locals). The interior however does ooze Parisian charm with red pinned leather seating, bell shaped lamps and a fully stocked wine bar. In the past I’ve visited the restaurant on special occasions like birthdays and family get togethers, but on this occasion I was invited to sample their refreshed menu and share with you a…

🍷🍺 FREE DRINK CODE AT BISTROT PIERRES! 🍺🍷
If after reading this post you’re tempted to visit Bistrot’s (before the 20th July), I have a code for you to receive a complimentary drink: LBPBRNQB – T&C’s apply, they’re available here. 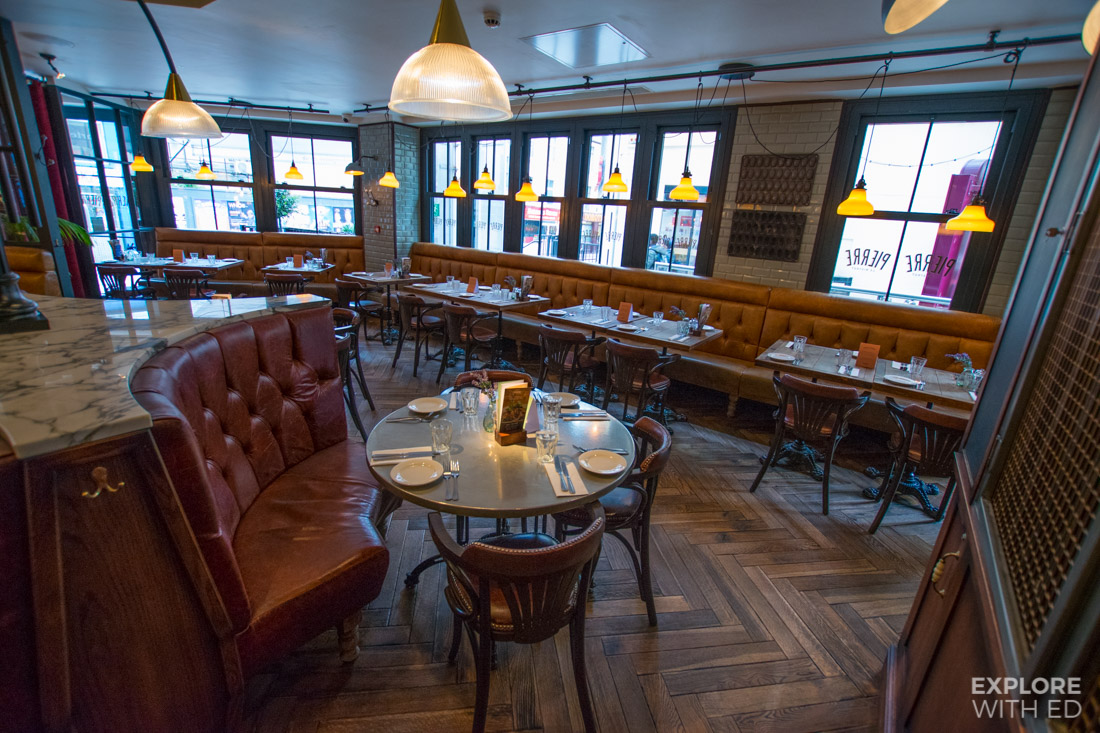 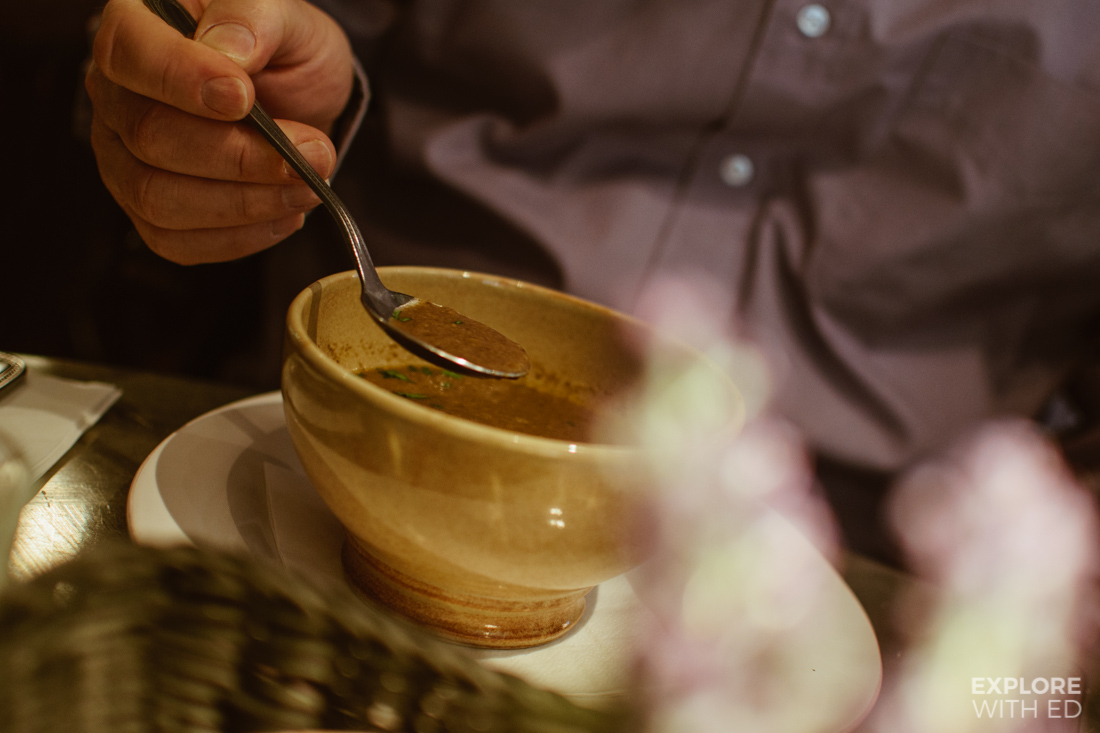 ‘The Spring Evening Prix Fixe’ – Any two courses for £15.95
The starters come with freshly baked bread and butter, ideal if you’re tempted by the ‘Soupe du jour‘, which was mushroom during my visit. My guest found the soup a little salty for his palate but still enjoyable enough to sink the lot. 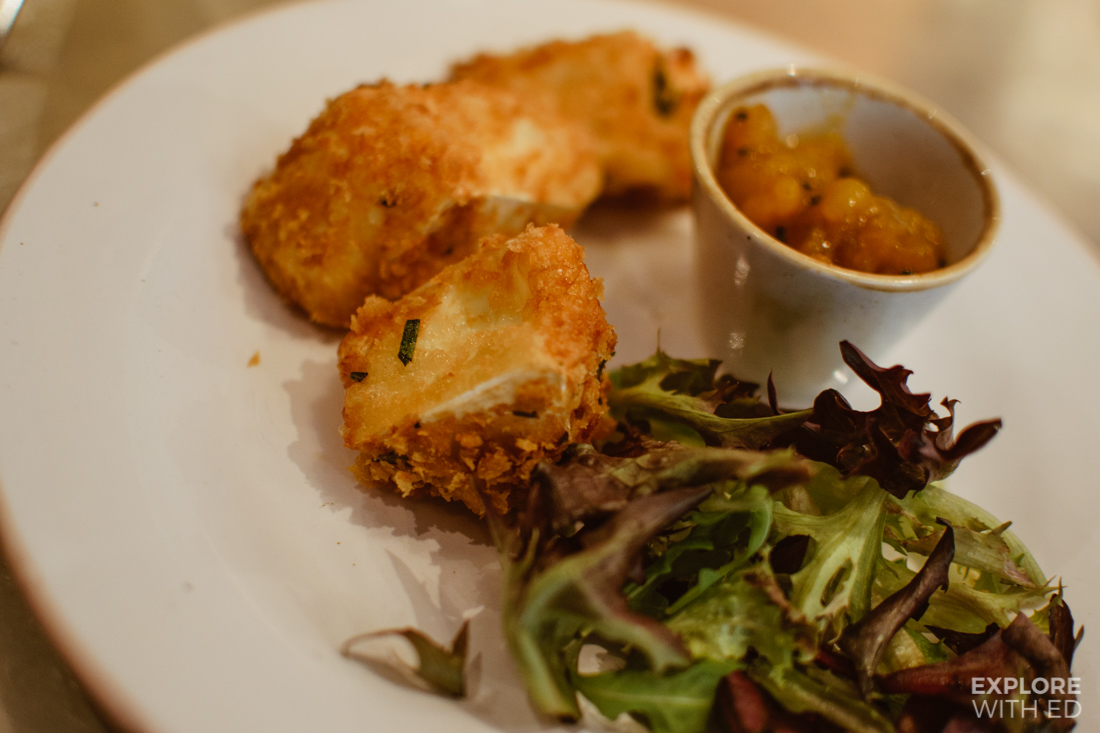 I opted for the A La Carte menu to try the new ‘Fritot de Brie’ (deep-fried brie) because how can you go wrong with fried cheese?! Bistrot’s comes with a sweet pear chutney and both together are absolutely scrumptious – I was particularly impressed by the light and crispy texture of the rosemary crumb. 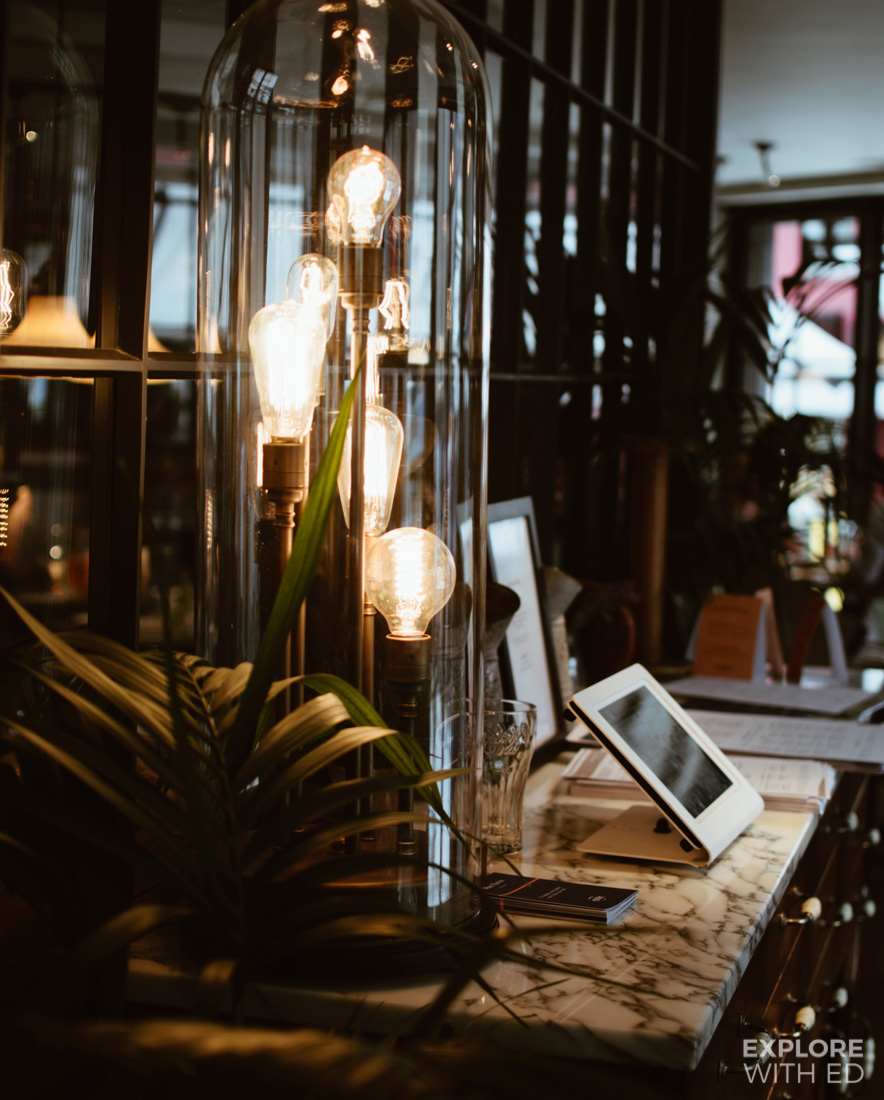 If you like seafood; lightly spiced crispy fried squid ‘Calamars‘ is also new, as well as baked ramekin of mussels ‘Cassolette de moules‘ or a fish and shellfish soup ‘Soupe de poisson‘. 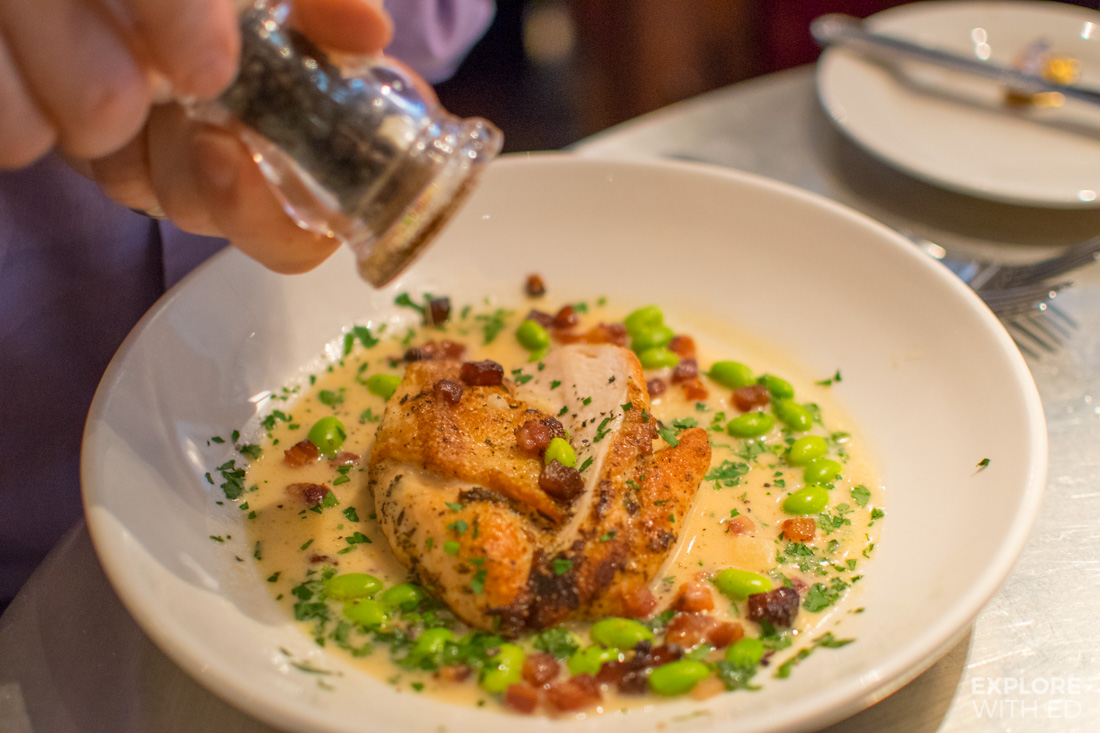 Bistrot’s French Classics for British Tastes
The menu is classic French but suitable for modern (and British) tastes – don’t expect escargots and frogs legs, Bistrot’s offering is far more accessible and family-friendly with seasoned vegetables and potatoes accompanying every main dish. The steaks are actually sourced in Scotland, but the pommes frites and roasted garlic and parsley butter gives it a French twist. 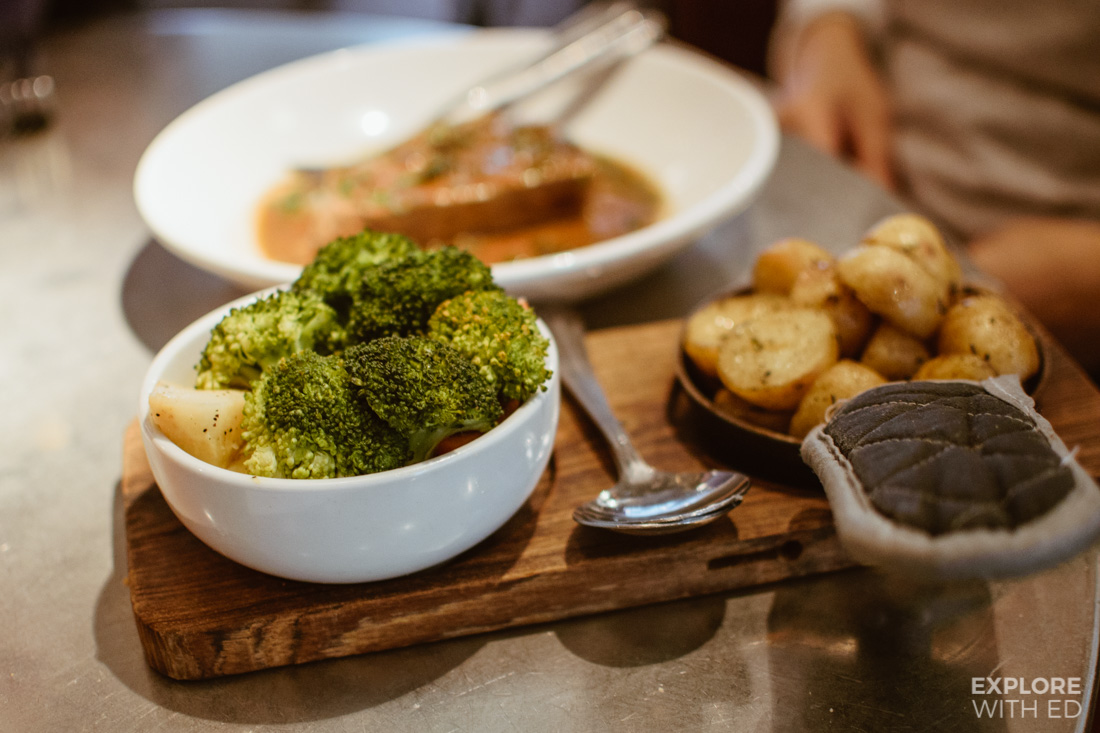 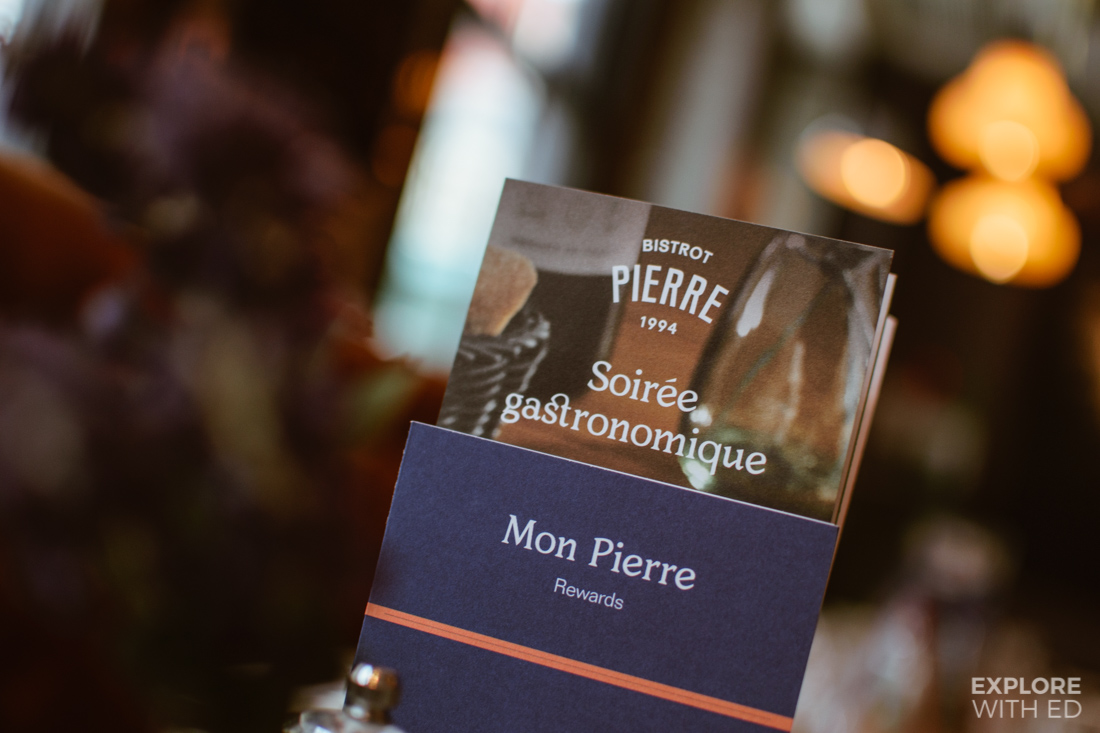 There are menu options for the more adventurous foodies, for example the ‘Bouillabaisse maison‘ is a staple fish stew in Marseille that Bistrot’s have reimagined, or the ‘Epaule d’agneau‘, a slow-cooked shoulder of lamb with Moroccan spices. 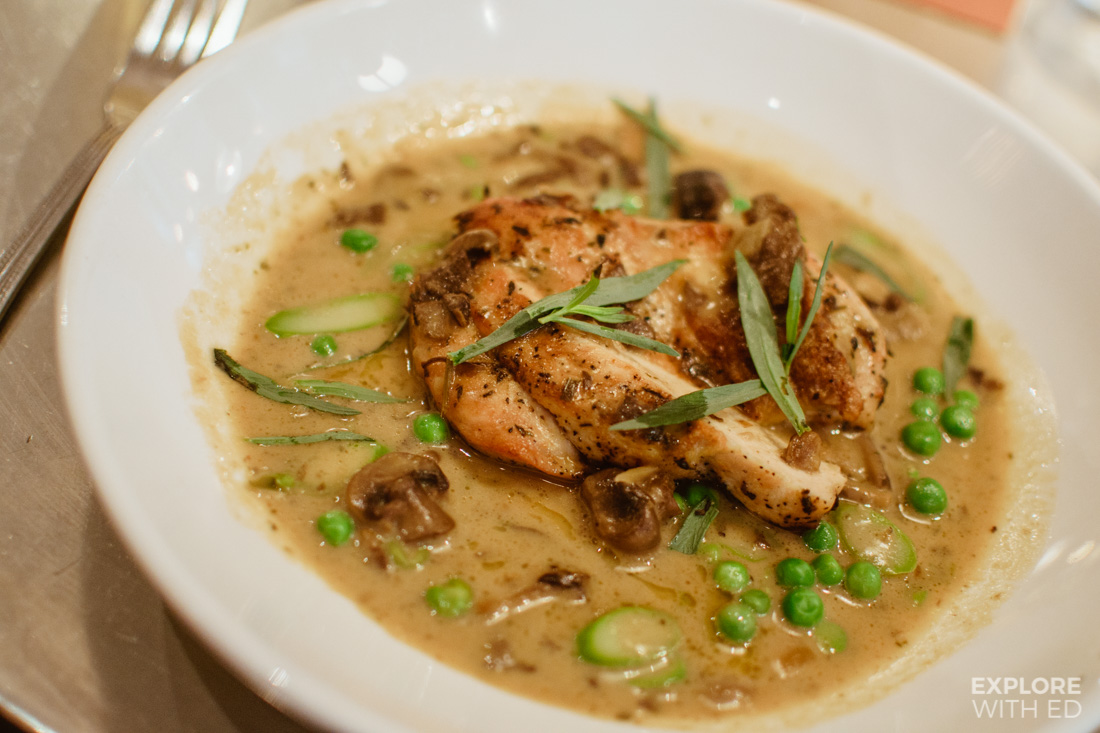 There’s some cross over between the Spring and A La Carte Menu – for example the Fish cakes ‘Croquettes de poisson‘ appears on both and at £12.95 (on the A La Carte) it’s just £3 extra to get two courses on the Spring Evening menu.

Too good to talk?
I had the new ‘Poulet printanier‘ (pictured above), pan-fried chicken soaked in a wild mushroom flavoured sauce with peas and asparagus. I devoured the lot and just about mustered a head nod when my guests asked if I was enjoying the dish – which says all you need to know. 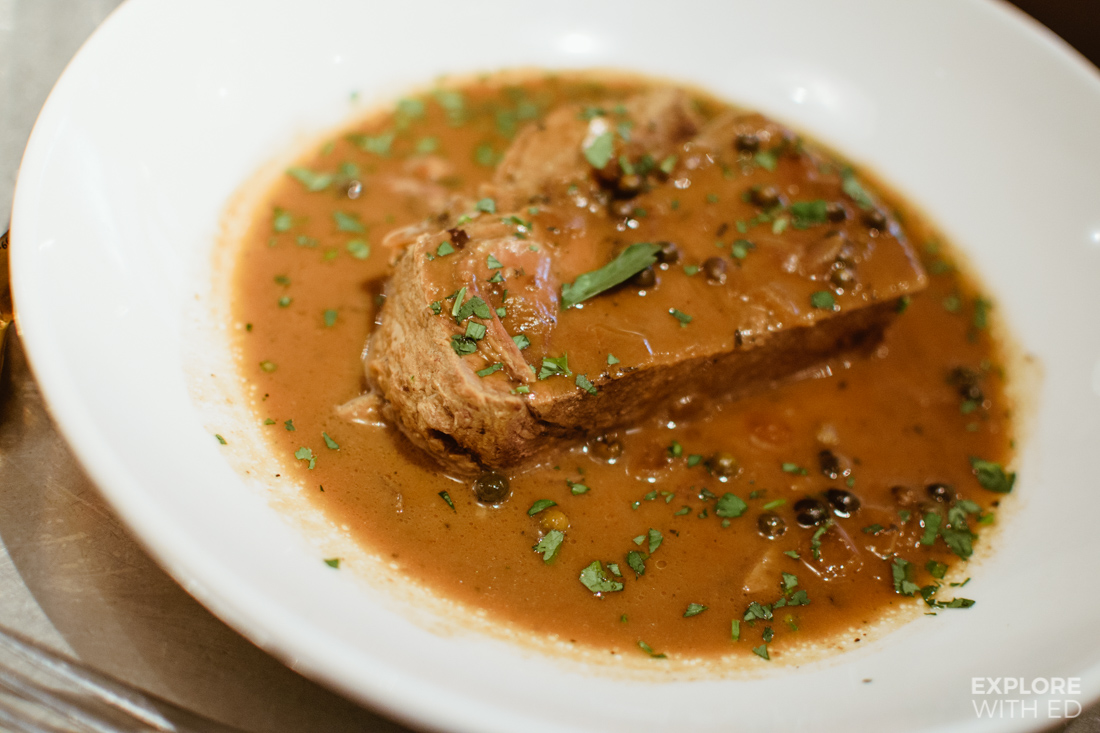 My guest had the braise beef (‘Boeuf bourguignon maison‘) and said it was so tender it felt apart like butter – très bien!

Further reading: Your go-to index of bars and restaurants in Cardiff and Wales 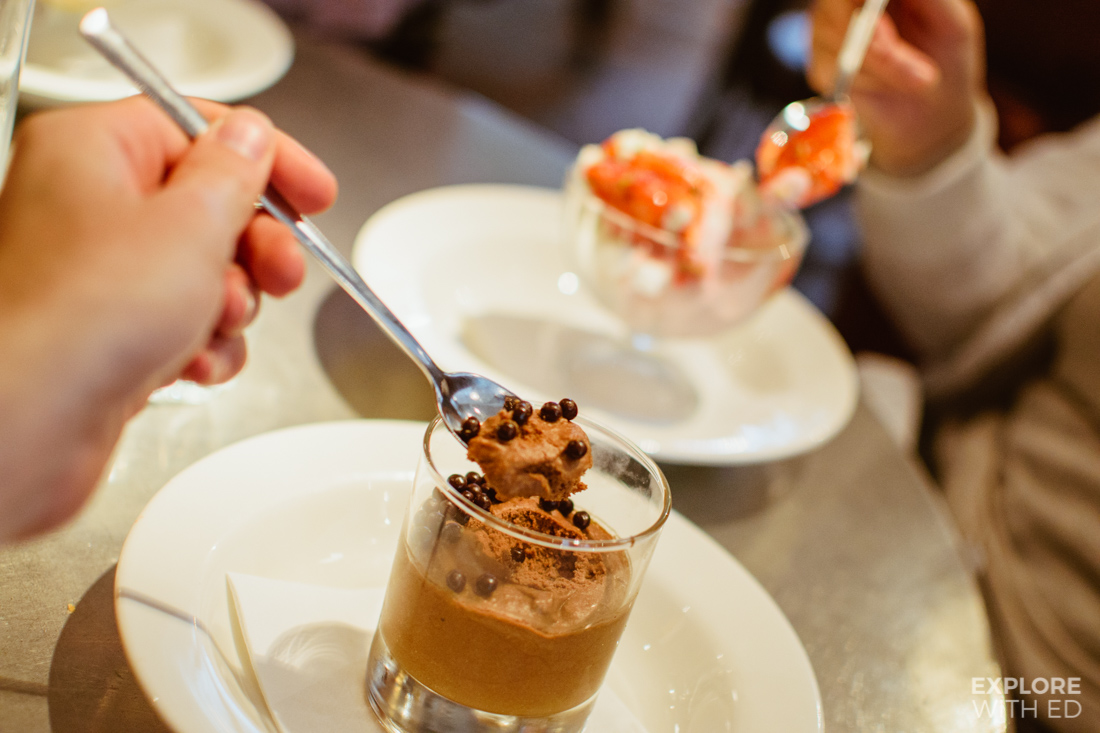 It wouldn’t be a French menu without ‘Crème brûlée‘ on the desserts, but the new ‘Mousse au chocolate’ took my fancy. I wasn’t sure what rich Valrhona chocolate was, but like fried cheese, it’s odds on I’m going to adore it (the internet says it’s a premium chocolatier near Lyon), more-so when mixed with flavours of orange and hazelnut praline. 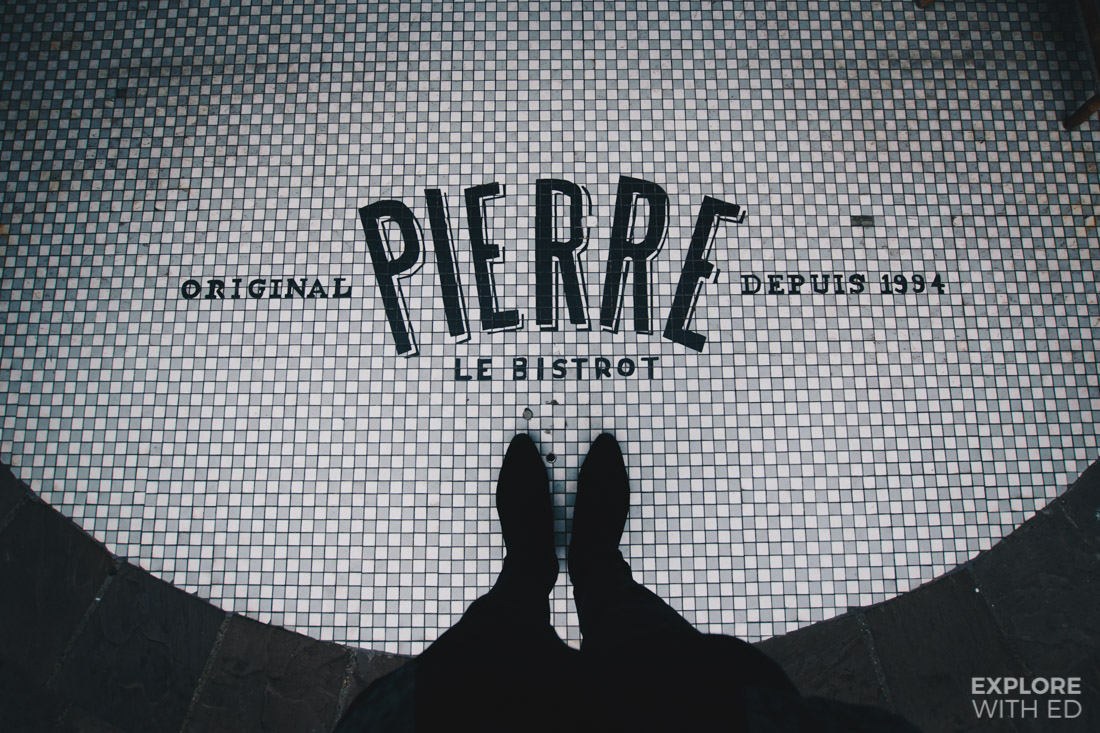 What about the local independents?
I’m all for supporting independent businesses, but equally enjoy more established eateries from time to time, particularly when they’ve taken years to master their craft and build a reputation. Lets not forget many of these had humble beginnings too, Bistrot’s being the brain child of two childhood friends, Robert and John, back in 1994 in the Midlands. The restaurant was around 60% capacity during my visit on what I thought would be a quiet Thursday early evening. Perhaps I could’ve been more daring with my choices, but the heart wants what it wants and I left feeling very content. À bientôt!


To book or view the latest menus, visit the Bistrot Pierre website.
Disclosure: My dining experience was complimentary in exchange for this review however all opinions are my own.