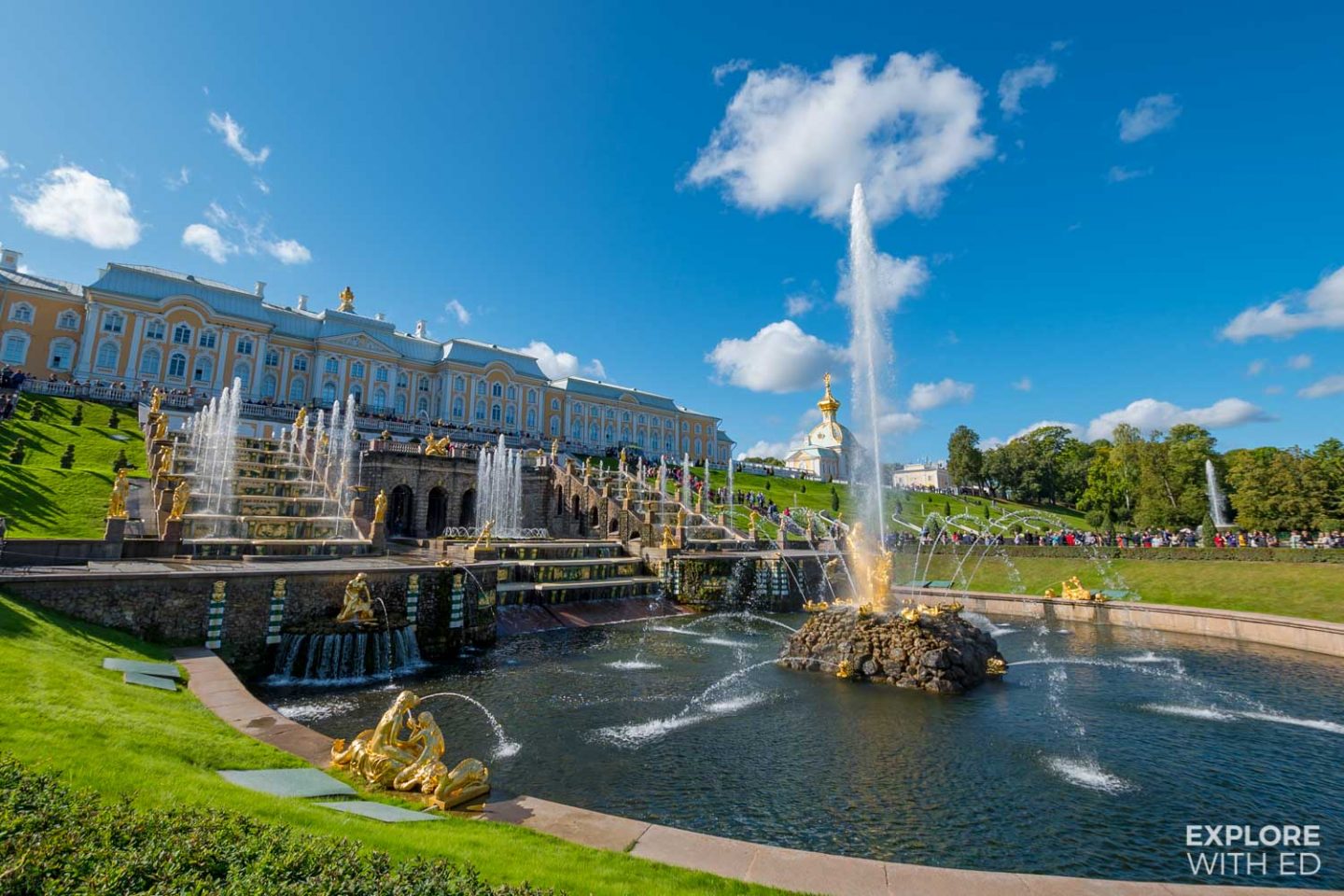 Exploring Catherine The Great’s Palaces in Saint Petersburg is a feast for the eyes – grand rooms of amber, marble and gold, fit for an Empress who’s reign is referred to as the ‘Golden Age of Russia‘.
If you’ve watched the Sky / HBO television series ‘Catherine The Great‘ starring Helen Mirren, you’ll see many of these palaces featured across the four episodes. 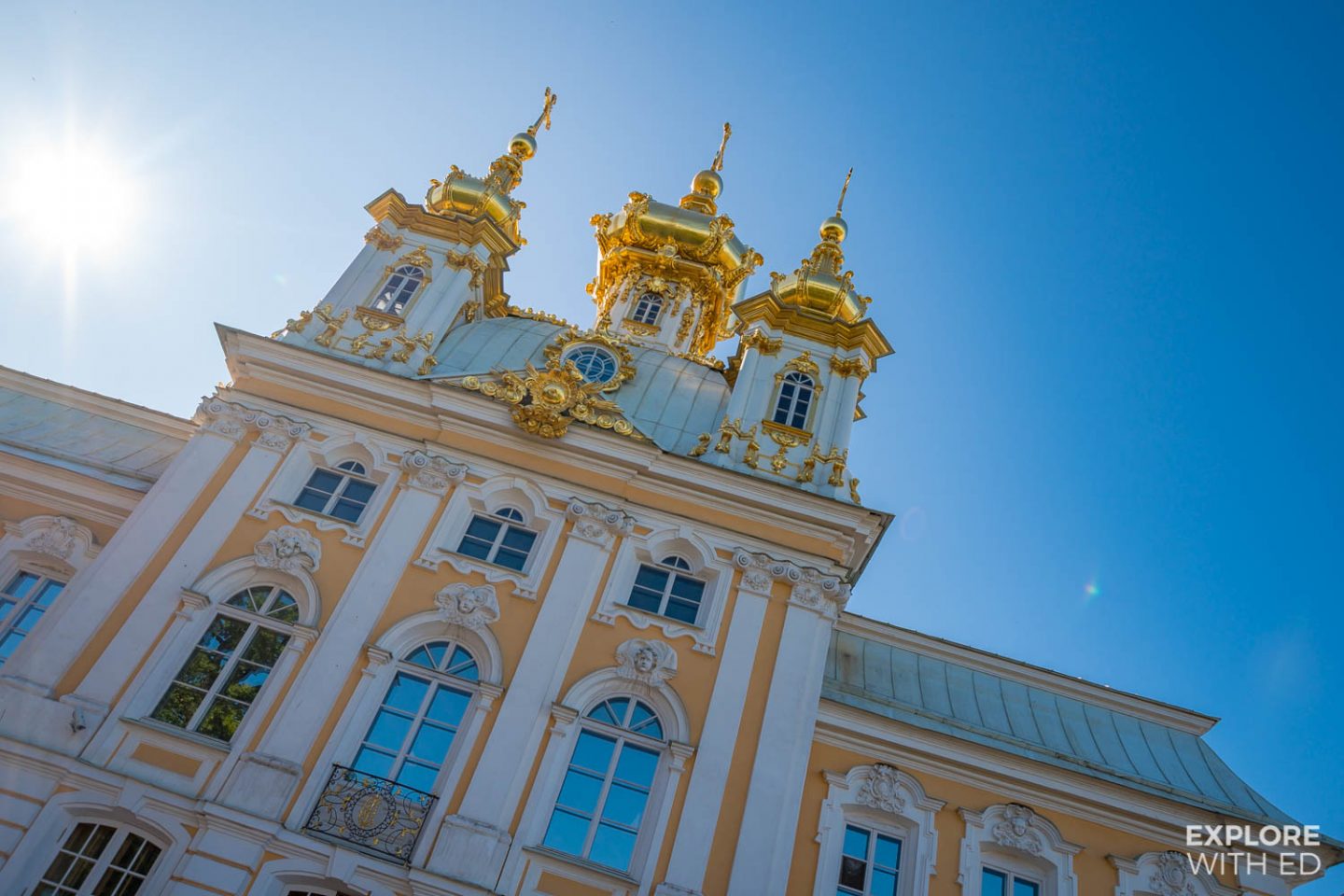 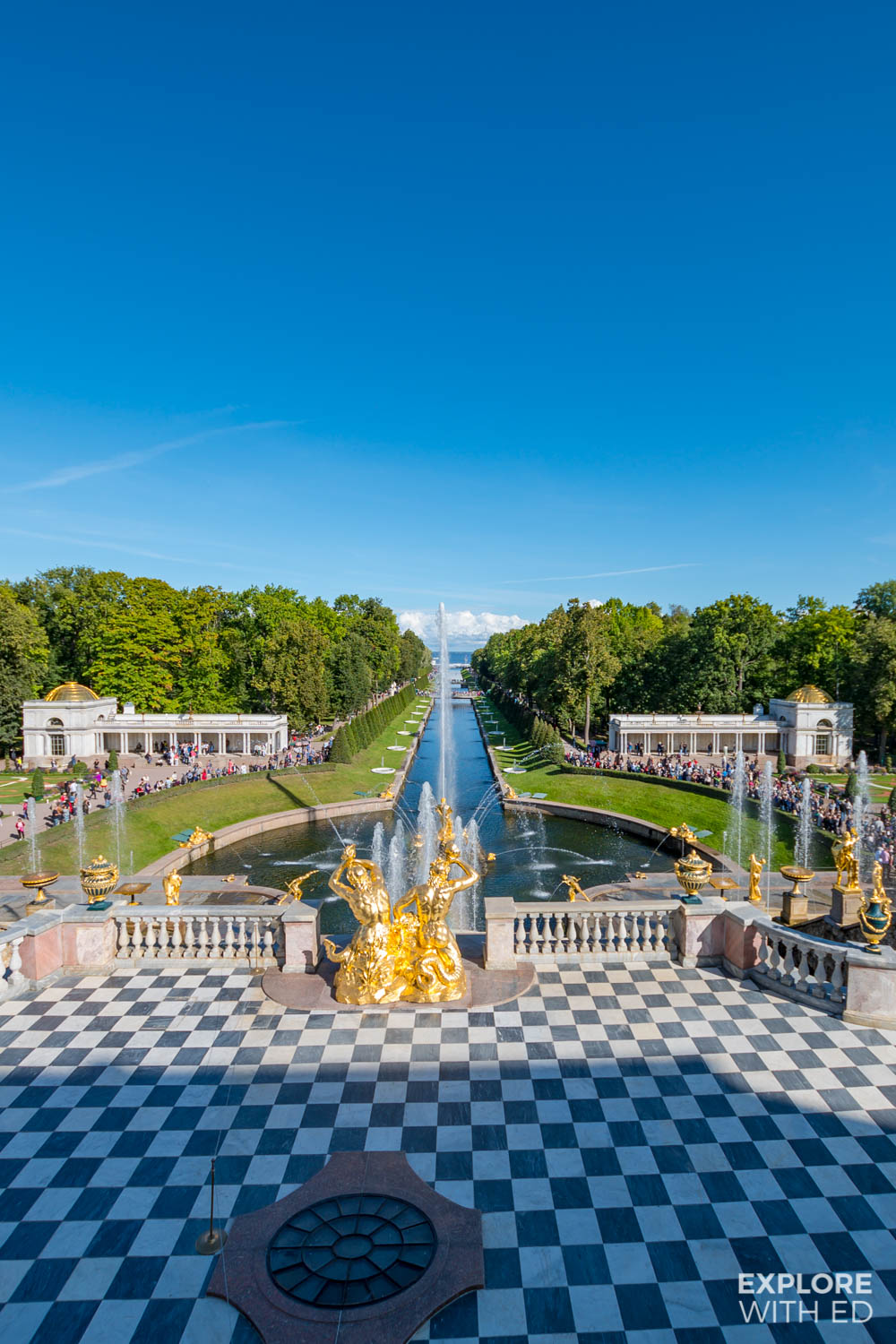 ‘The Russian Versailles‘, built for Peter The Great (Catherine’s husbands Grandfather), is located just outside of the city overlooking The Baltic Sea. The vast garden of Peterhof Palace begins at The Grand Cascade, a series of dazzling gold statues and fountains. 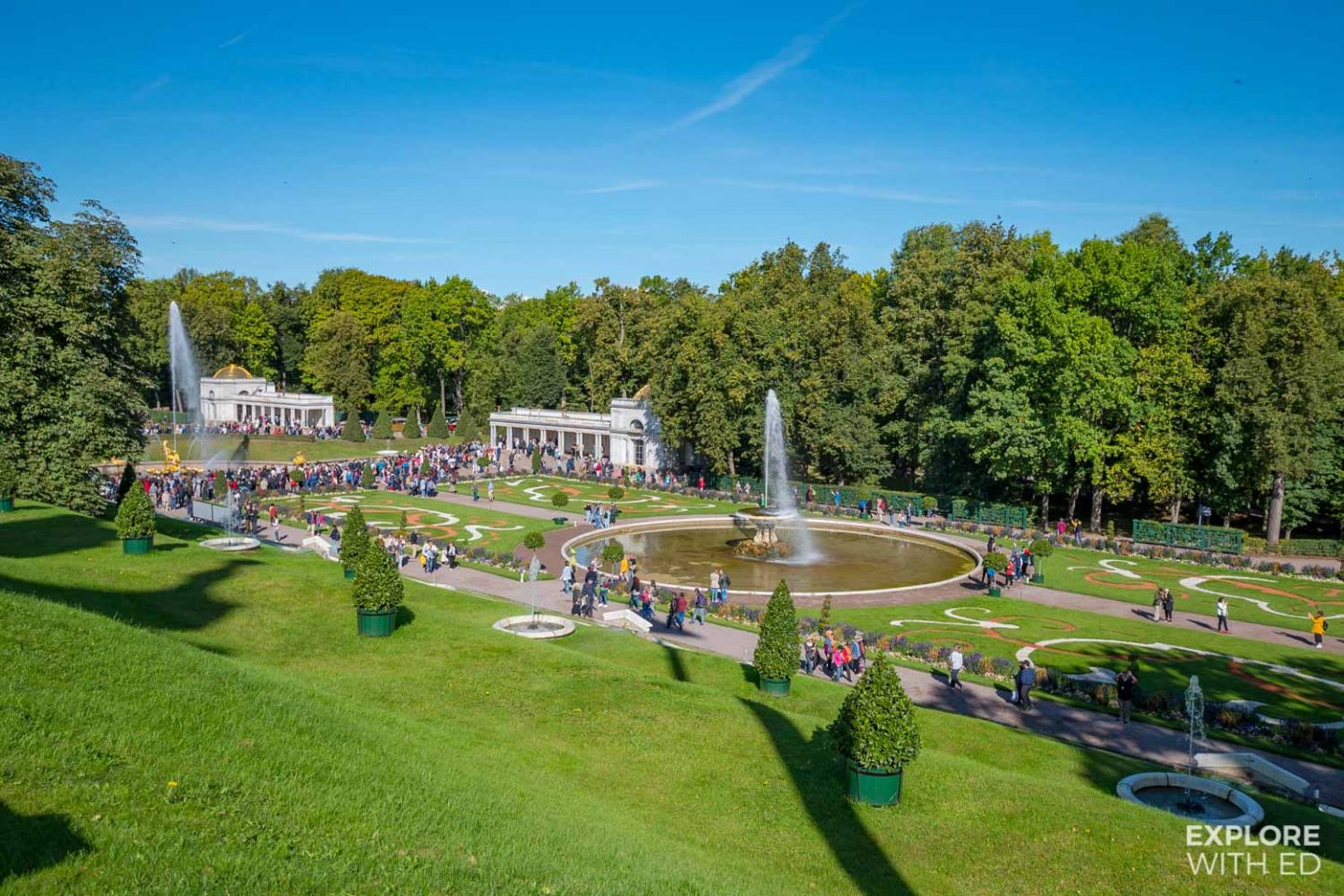 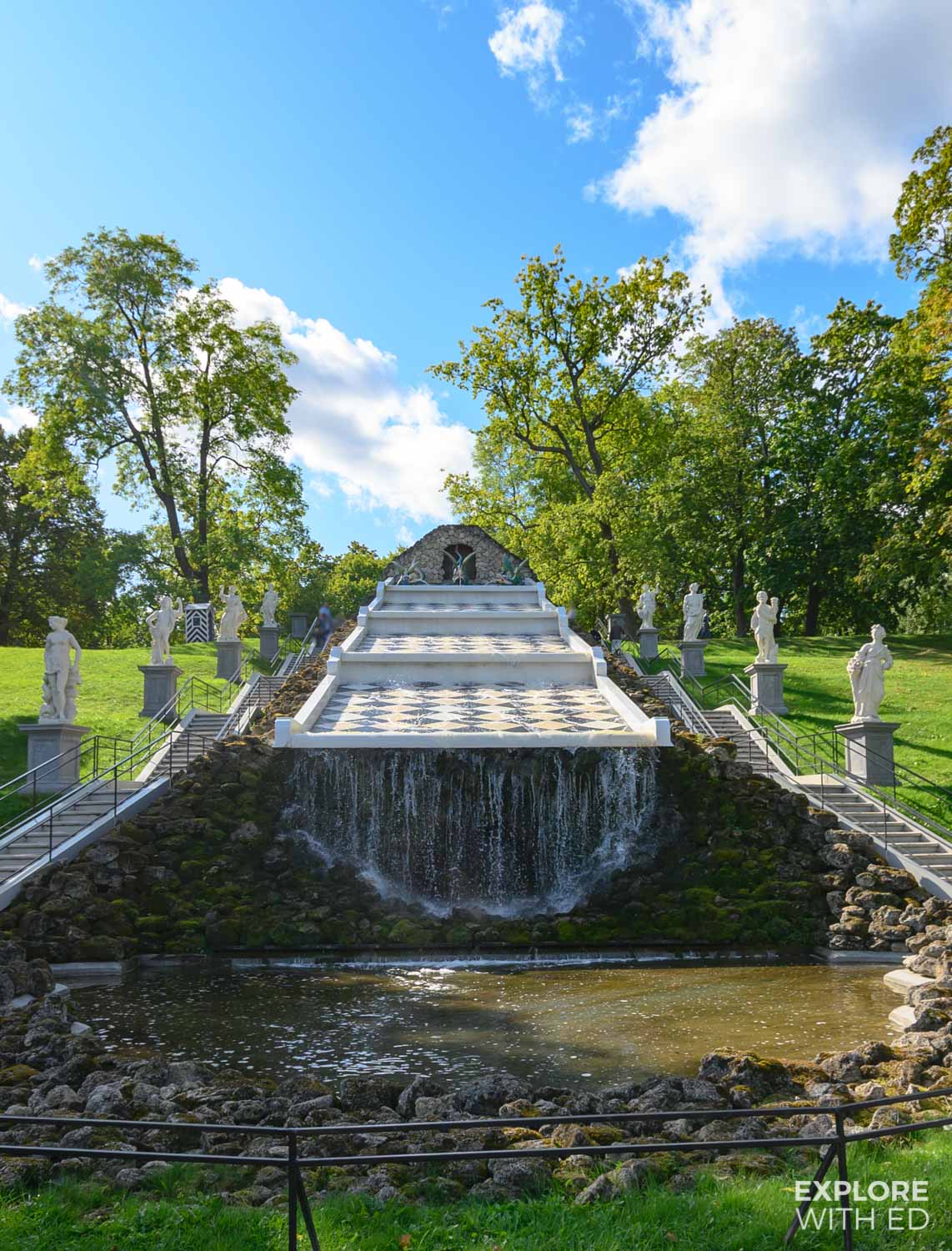 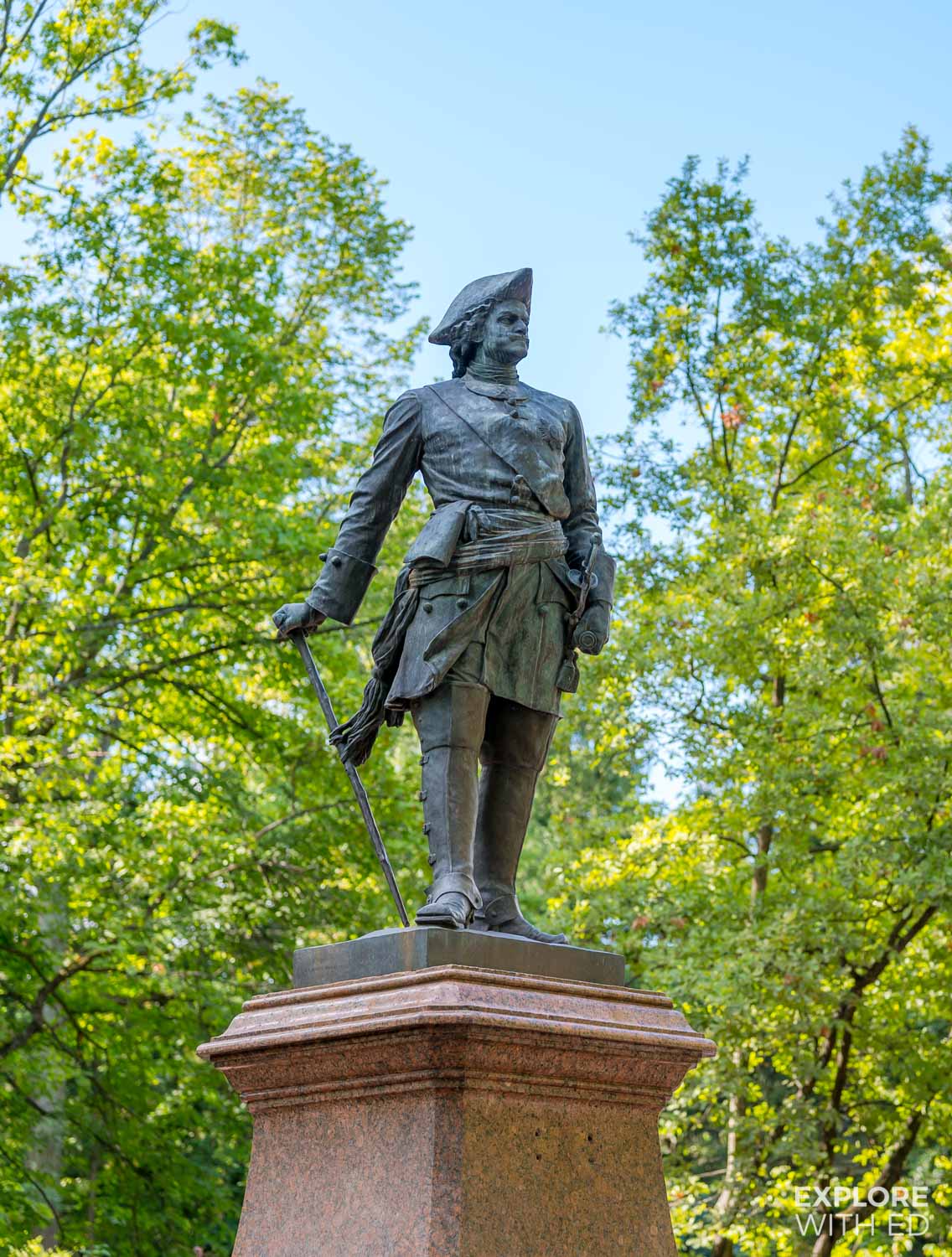 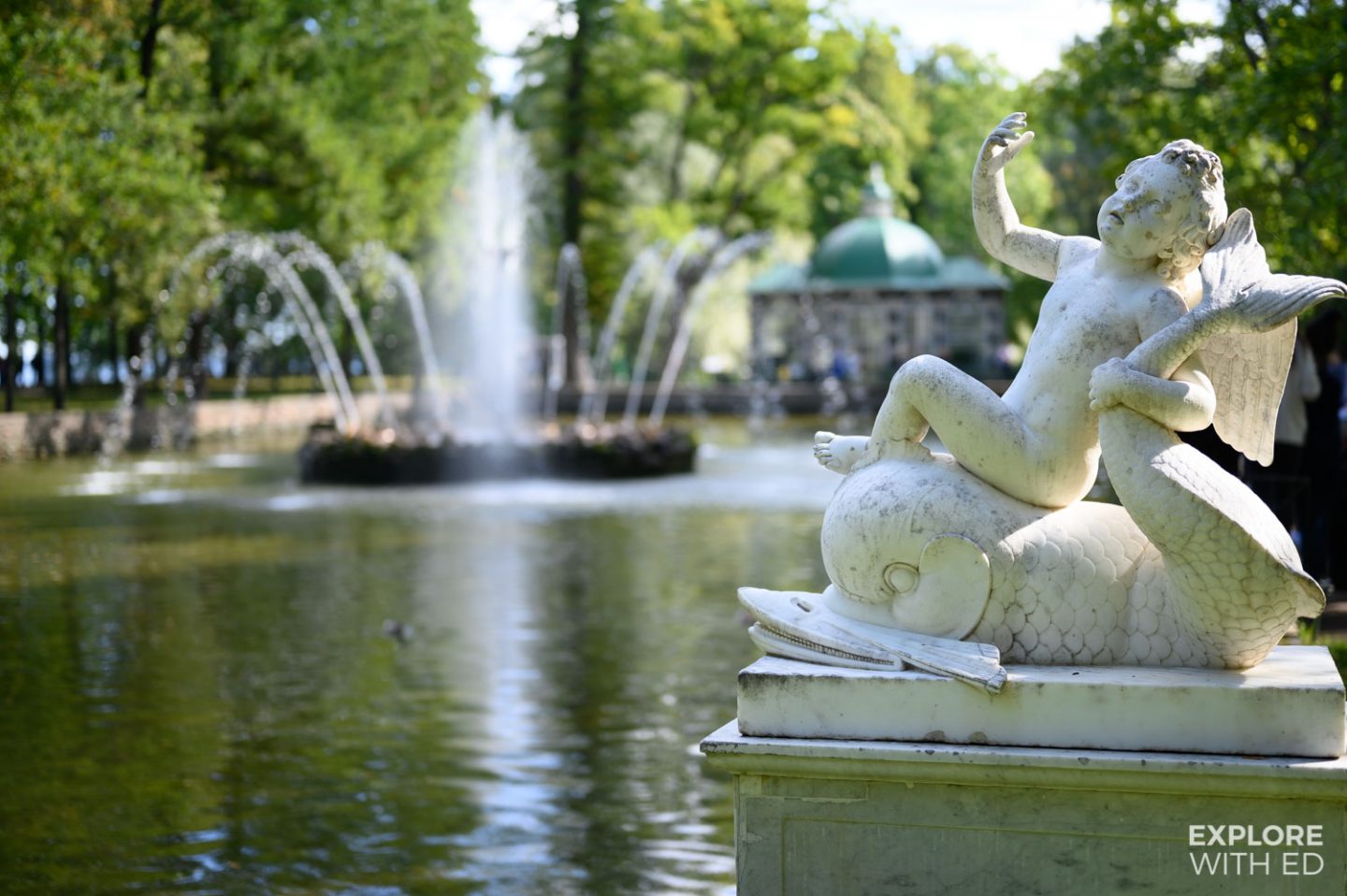 In the summer you could spend all day wandering through the Lower Gardens of Peterhof to enjoy the creative trick fountains, sculptures and pretty flower beds. In the Catherine The Great television series you’ll recognise Peterhof’s yellow and white facade, particularly during the first episode. 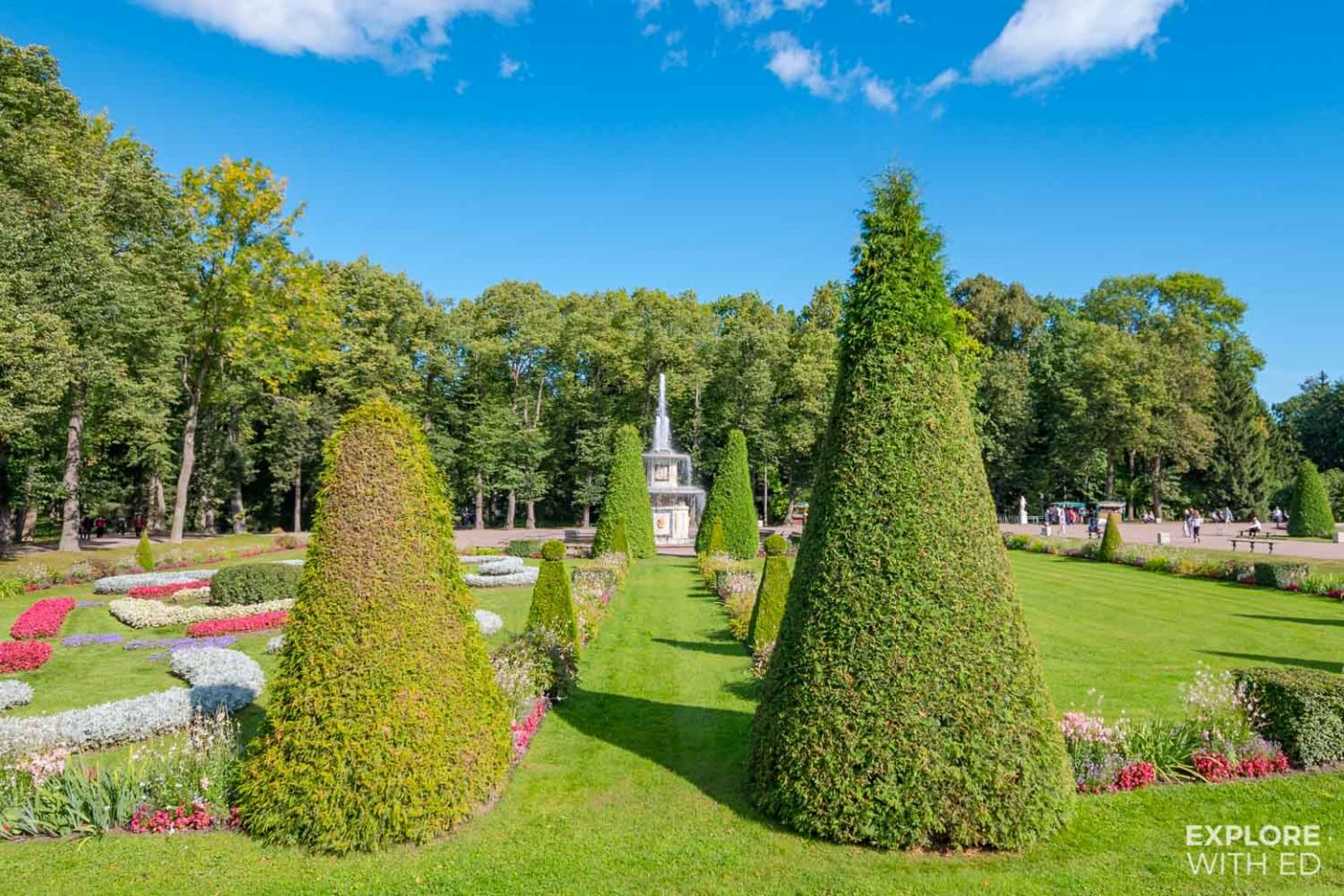 Now home to one of the largest art museum’s in the world, The Winter Palace is located in the centre of Saint Petersburg and, as the name suggests, is where the Russian Emperors would spend the winter season. Picturing the grand balls for 18th century nobility is easy as you ascend the grand staircase and enter the throne room.

Catherine The Great transformed The Winter Palace by adding more wings to her own taste and house her growing art collection. Today The Hermitage has works by Da Vinci, Rembrandt and Michelangelo. 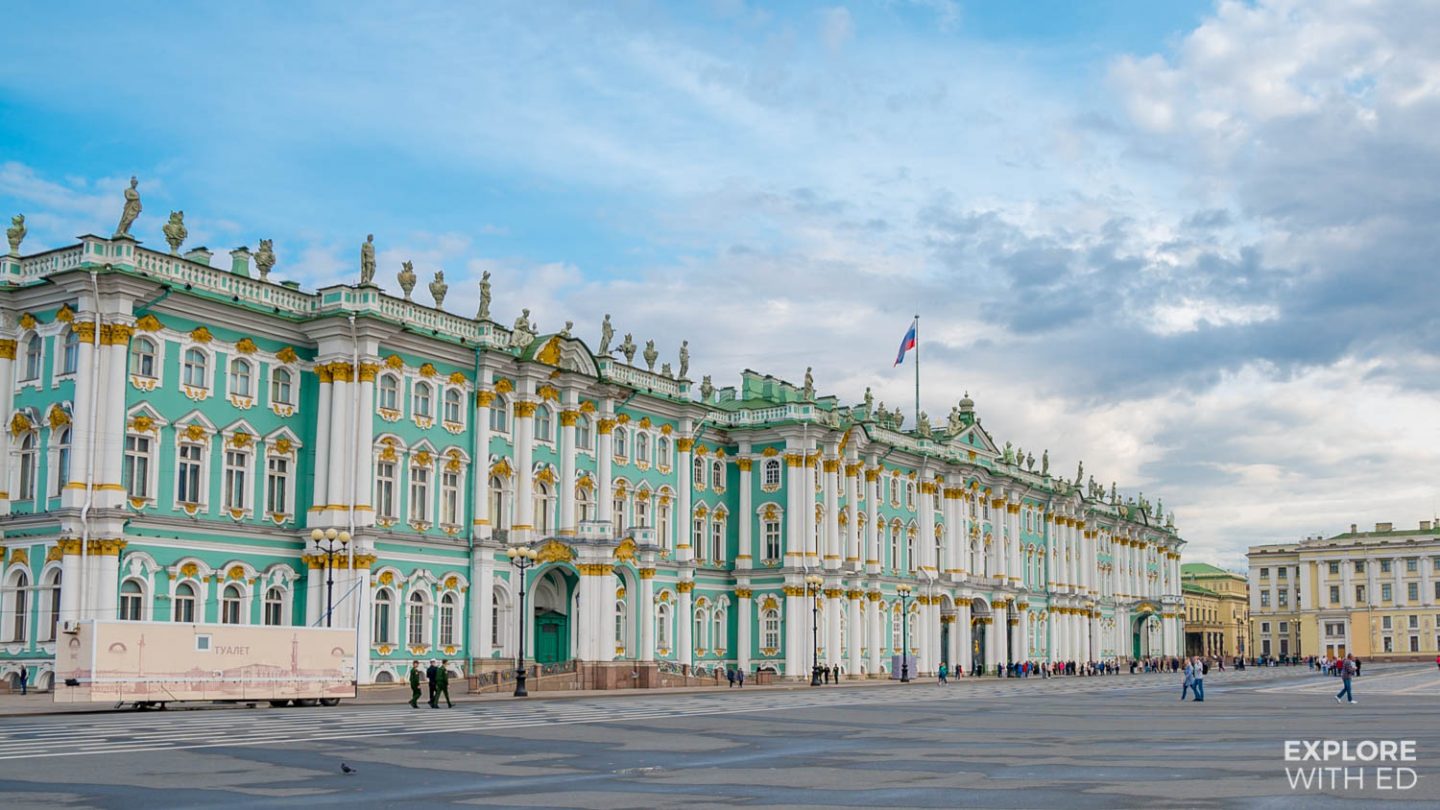 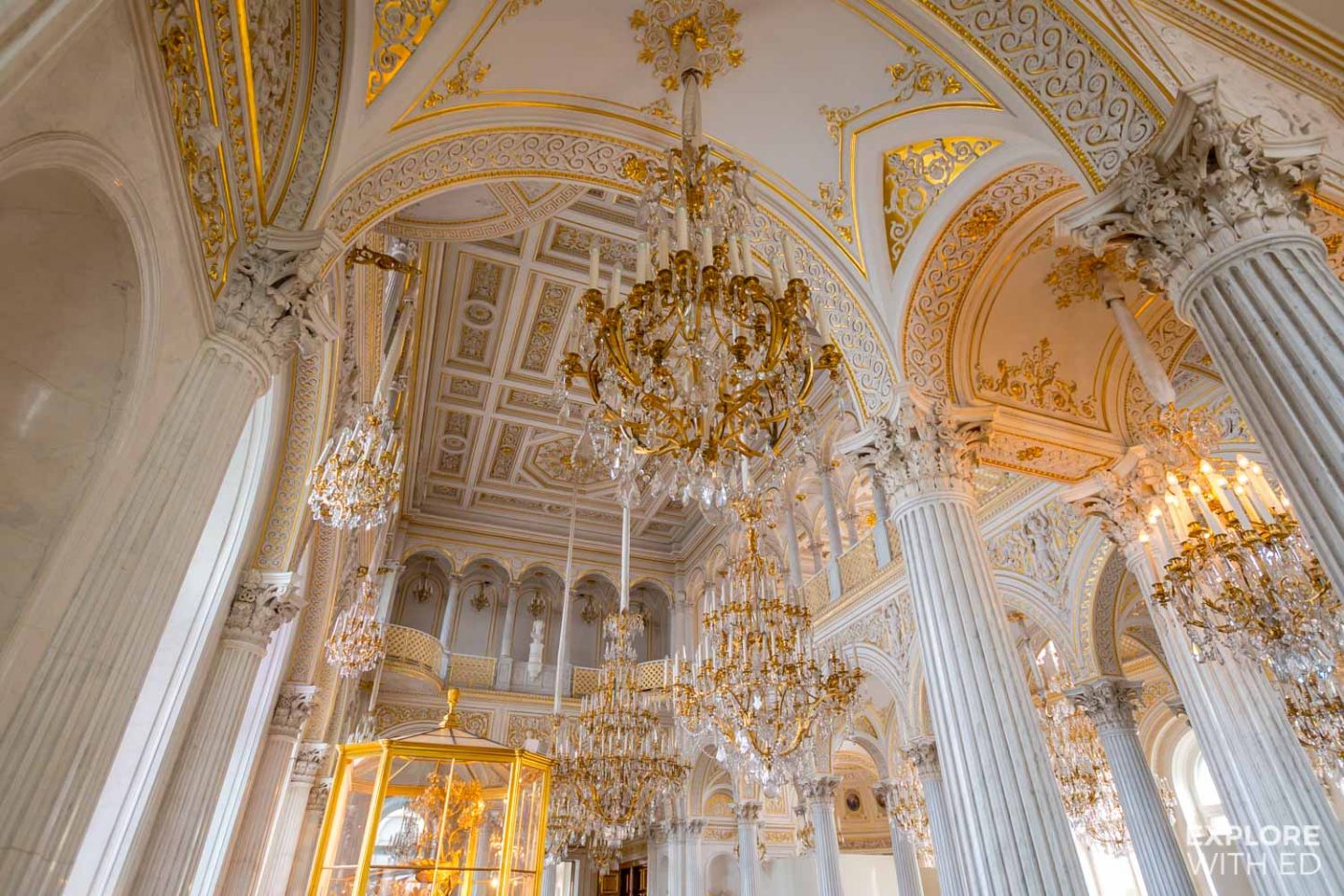 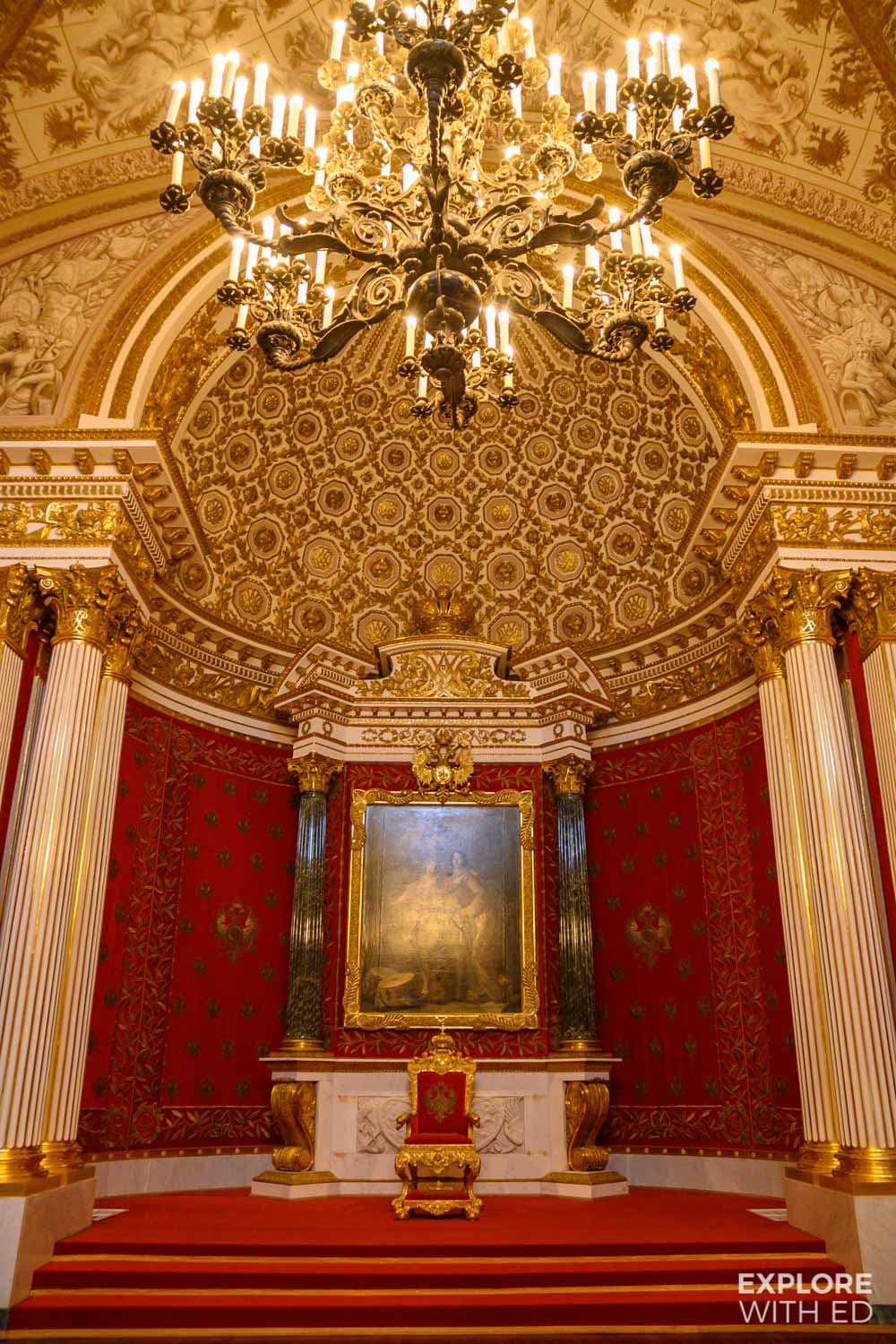 The bright blue and white colours of The Catherine Palace makes a striking first impression as you pass through the town of Pushkin on the outskirts of the city. It was Catherine The Great’s summer residence and was originally built for her predecessor Catherine I in 1717. The Great Hall or ‘Light Gallery’ is illuminated by hundreds of (now electric) candles that bounce off the mirrors and fill the room with a golden glow. 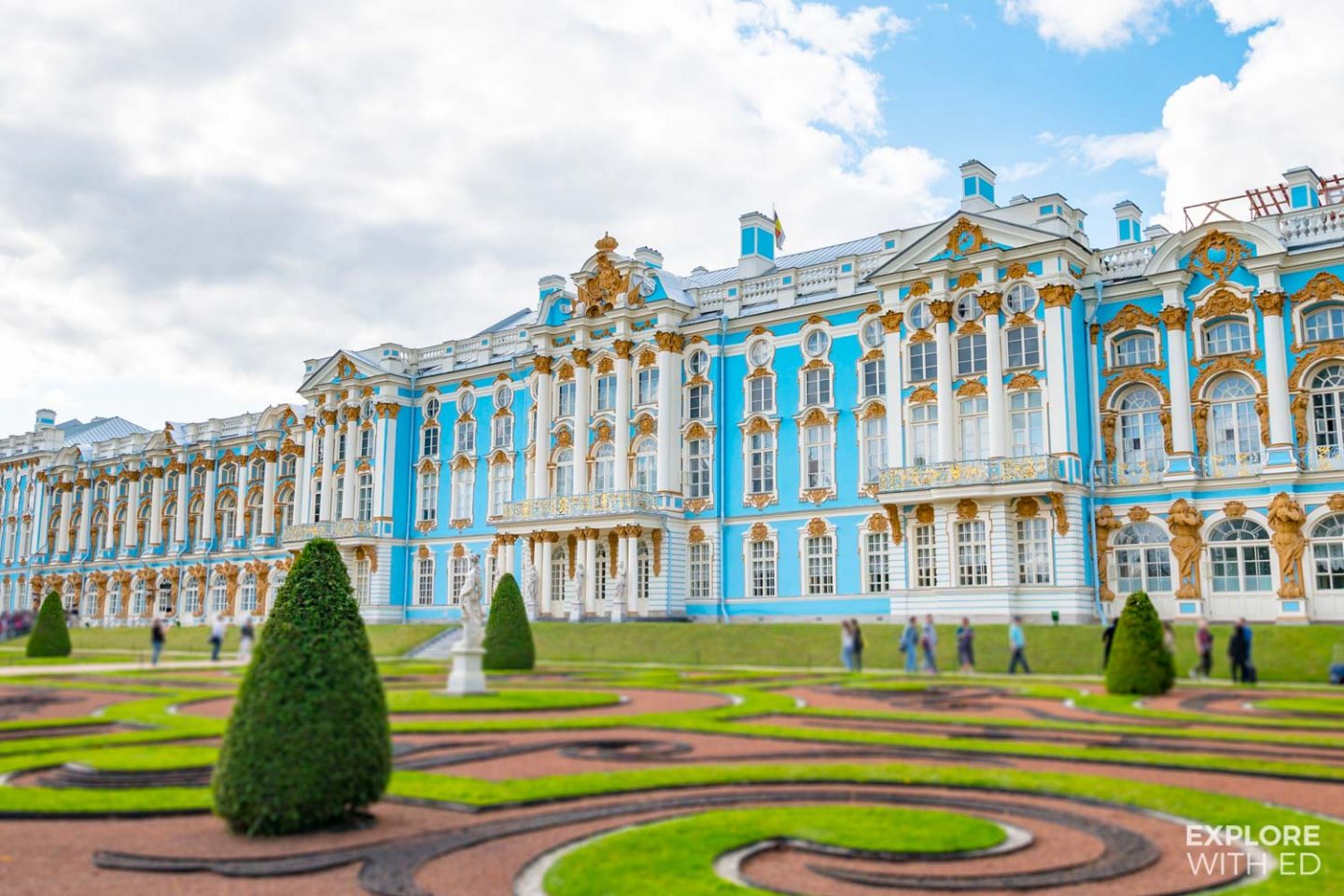 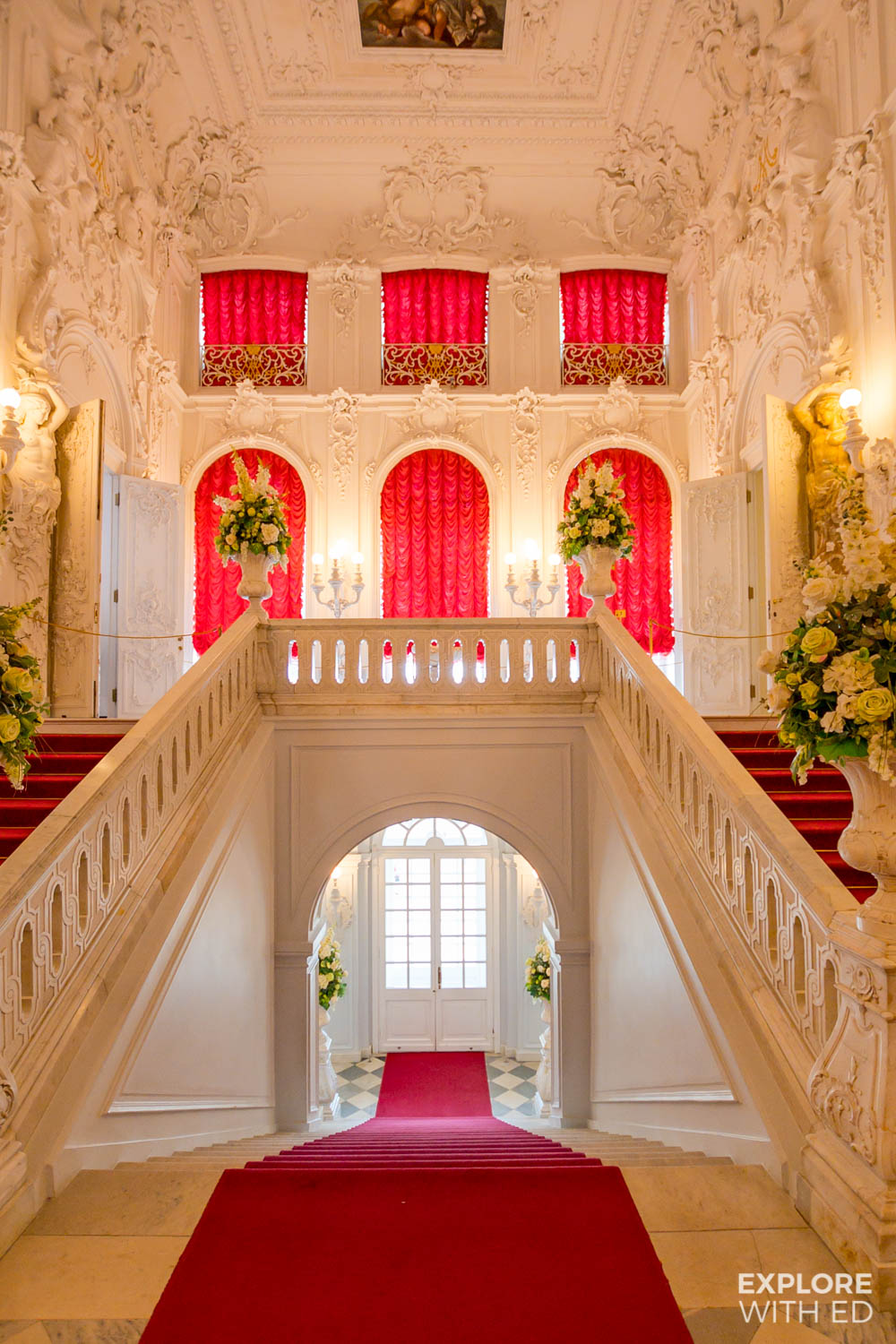 Related: Epic Castles In Wales You Have To Visit

The staterooms are uniquely designed in vivid colours of red, green and blue with the remarkable amber room being named “the eighth wonder of the world“. Unfortunately World War II was a disaster for the palaces and most of what we see today is a reconstruction of how it originally was. 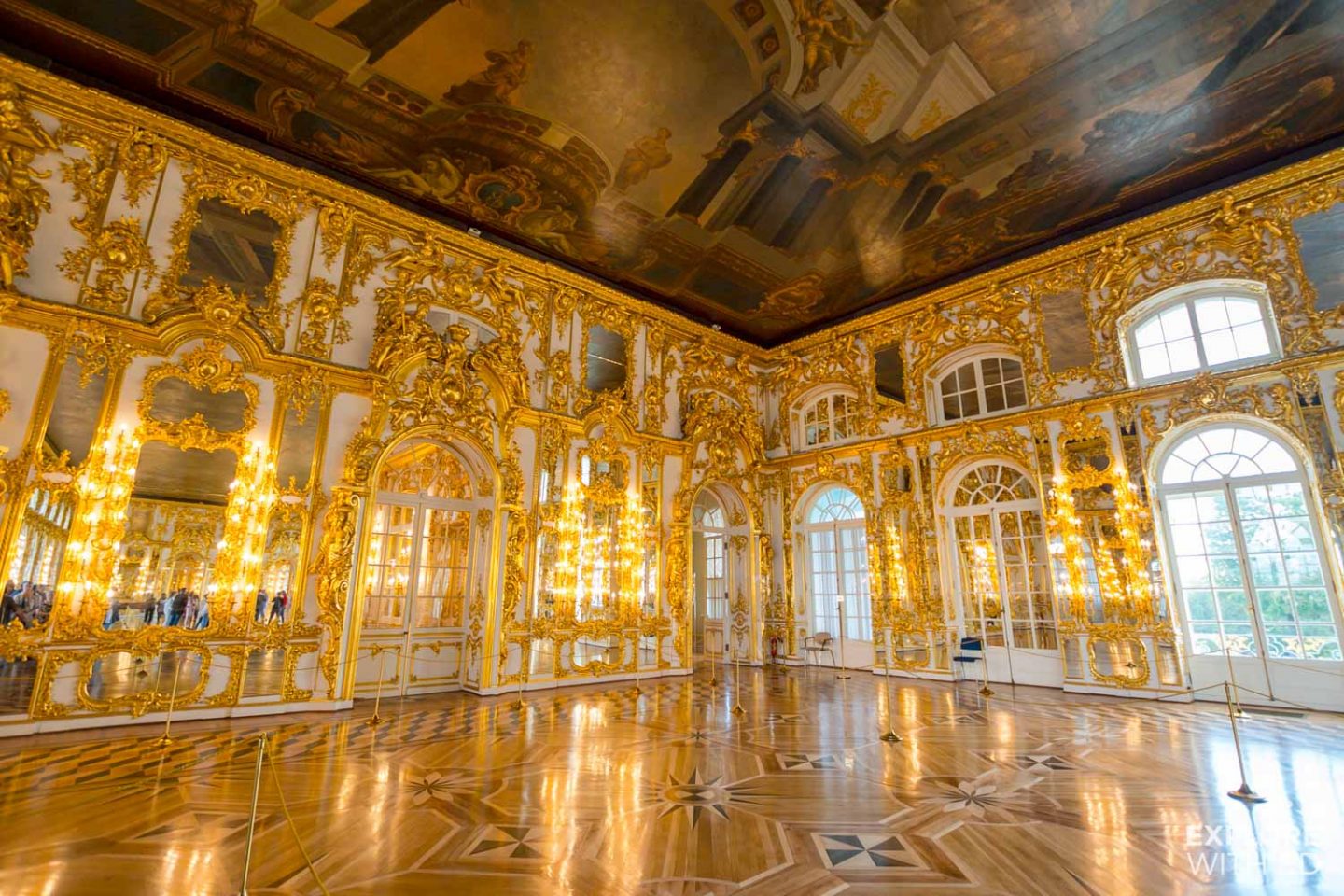 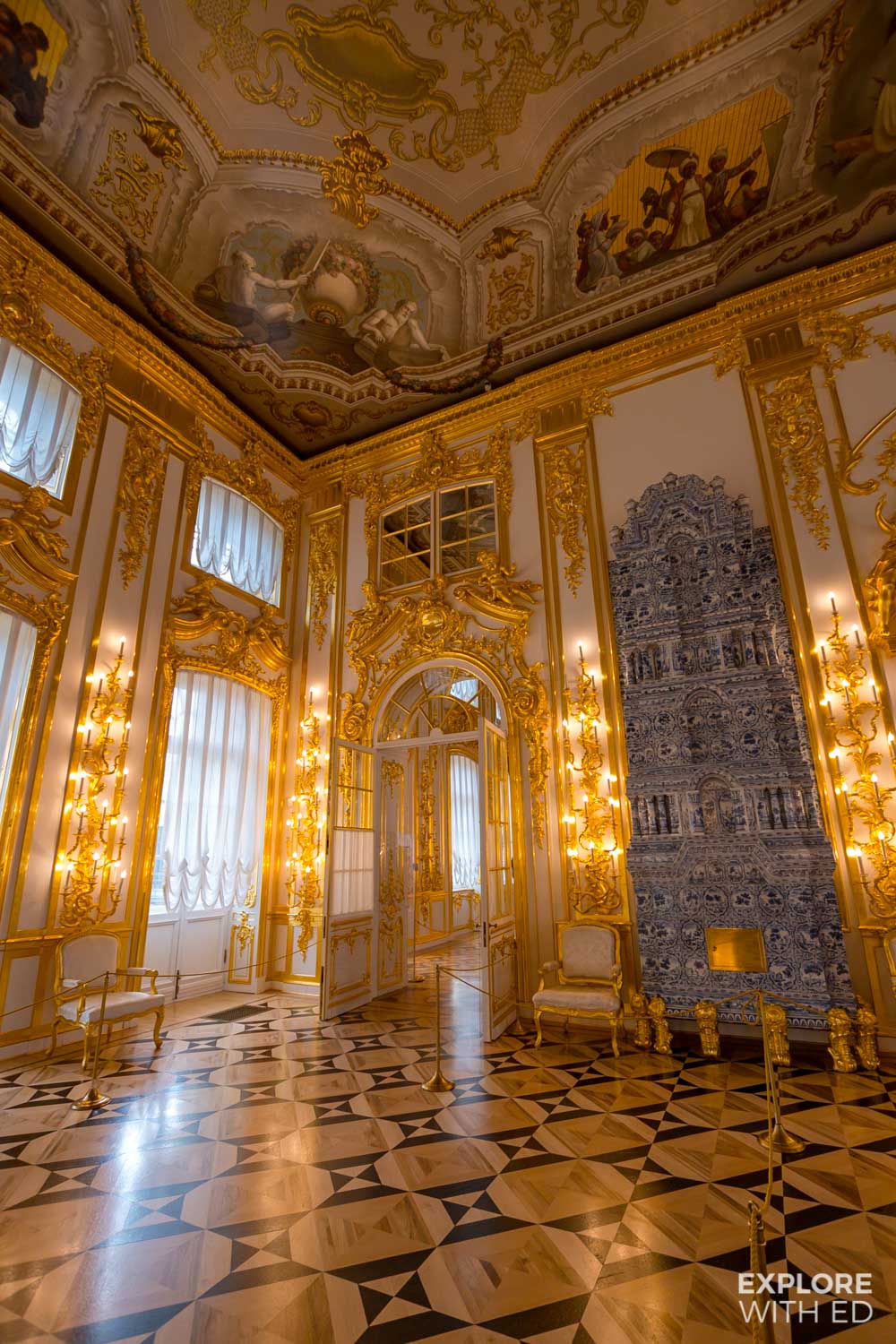 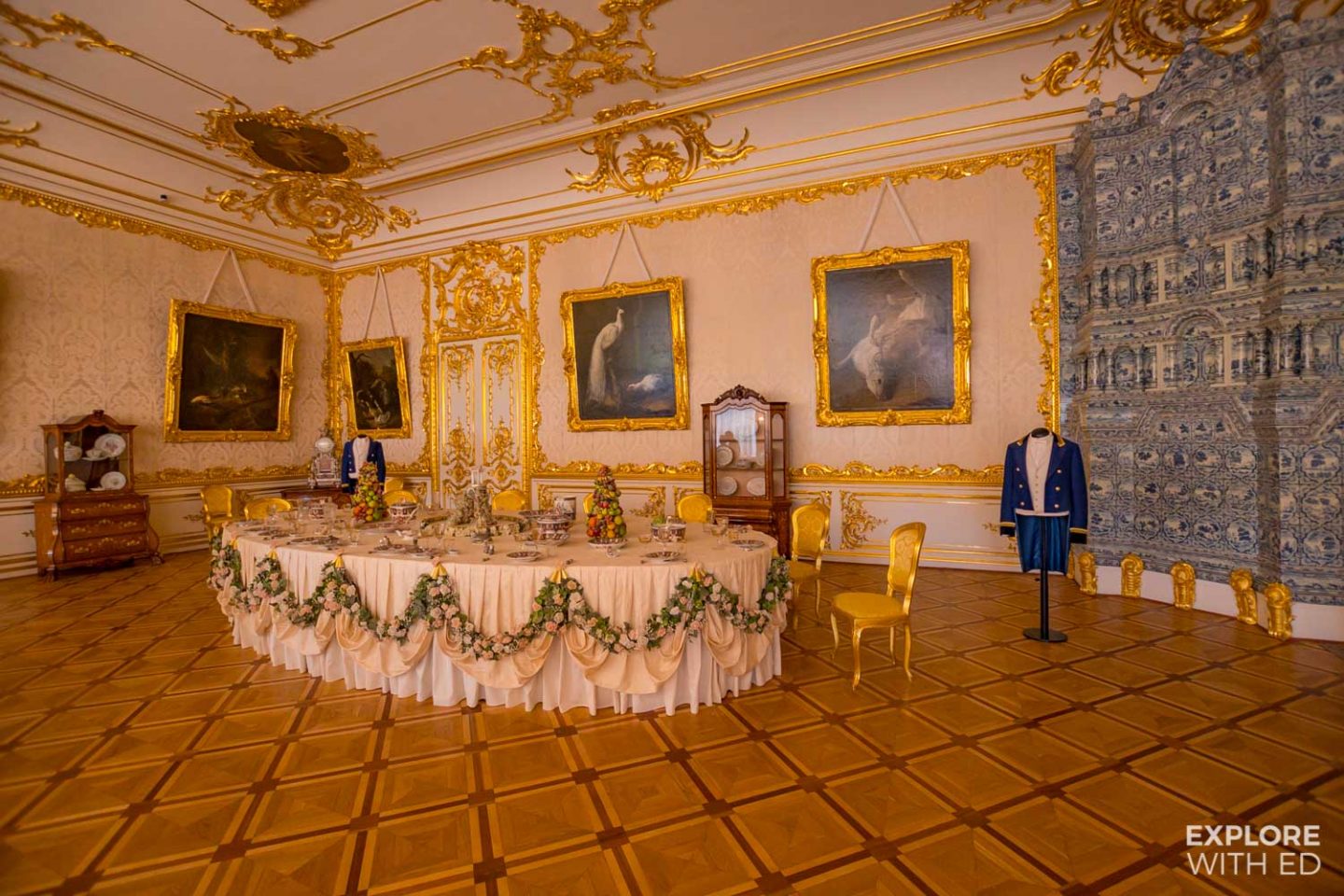 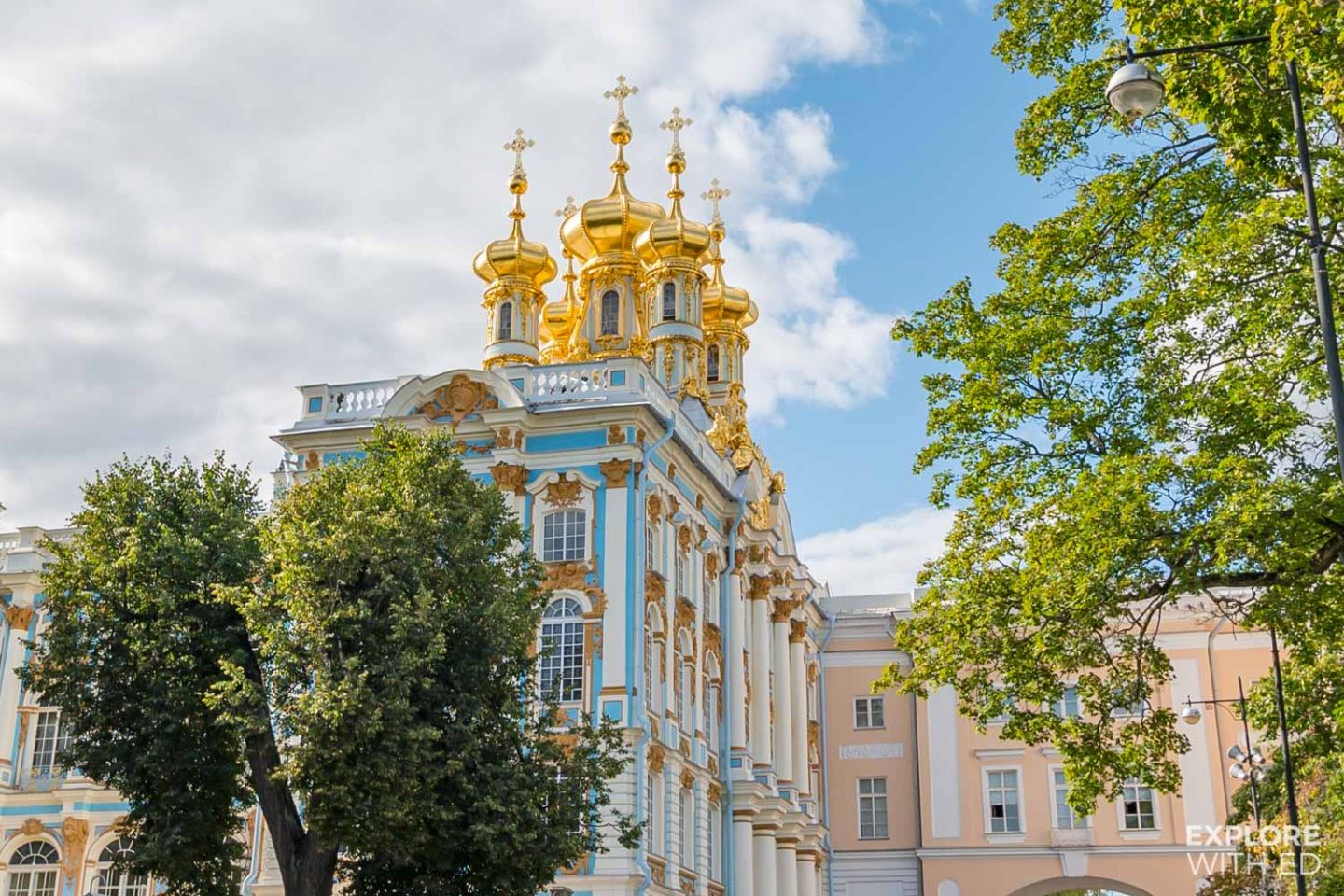 In the Catherine The Great television series Catherine Palace is used frequently – the Great Hall, Amber Room, Cameron Gallery and lake-side garden (when Catherine and Potemkin reunite) all make a feature.

It took 32 types of marble to construct the Marble Palace, and it was given as a gift by Catherine The Great to Count Grigory Orlov for his support during the early years of her reign. The palace is located on the bank of the river Neva and can be easily spotted on a canal cruise of Saint Petersburg. A canal cruise will also take you past other palaces and mansions across the city, like Peter The Great’s Summer Palace and Gardens. 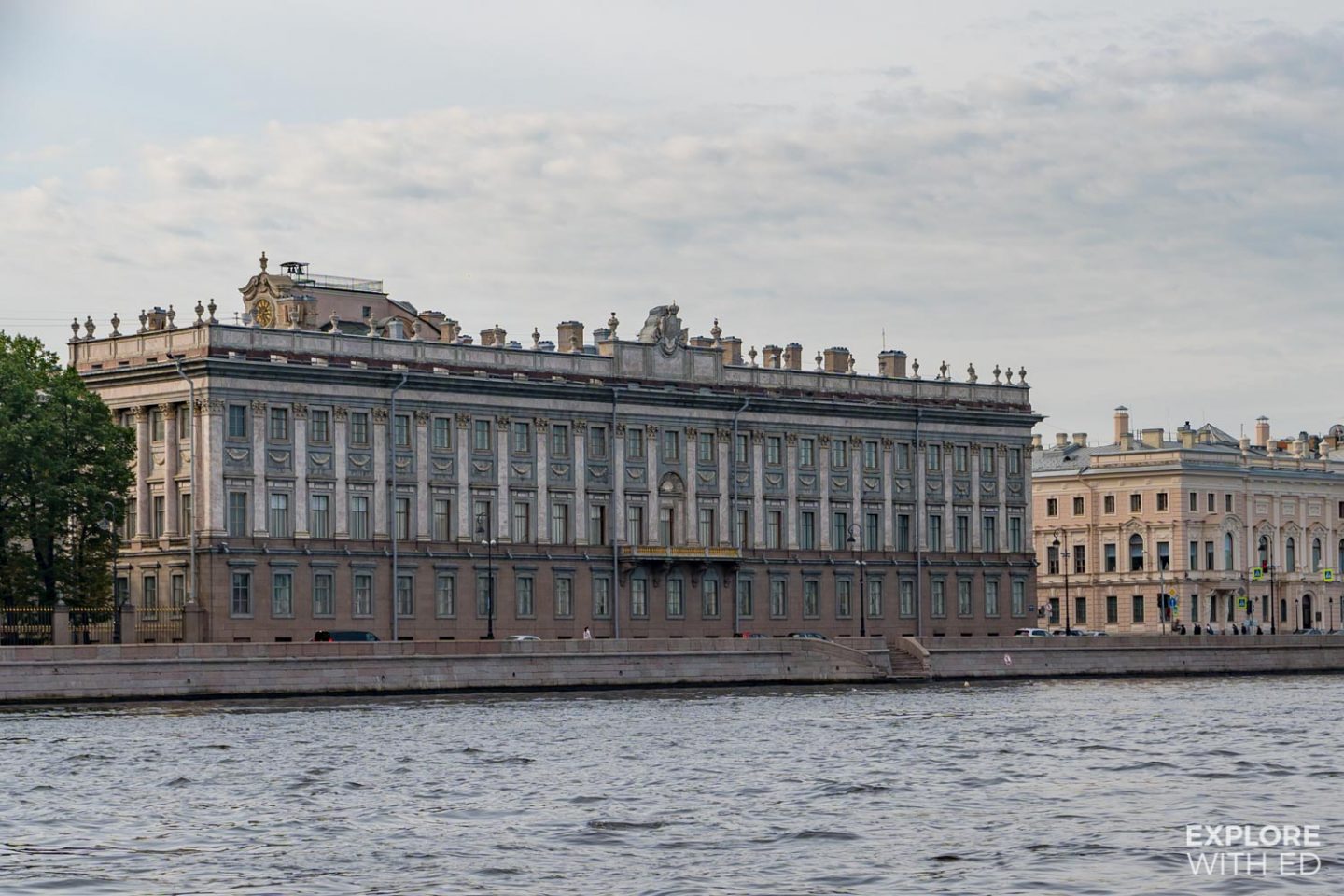 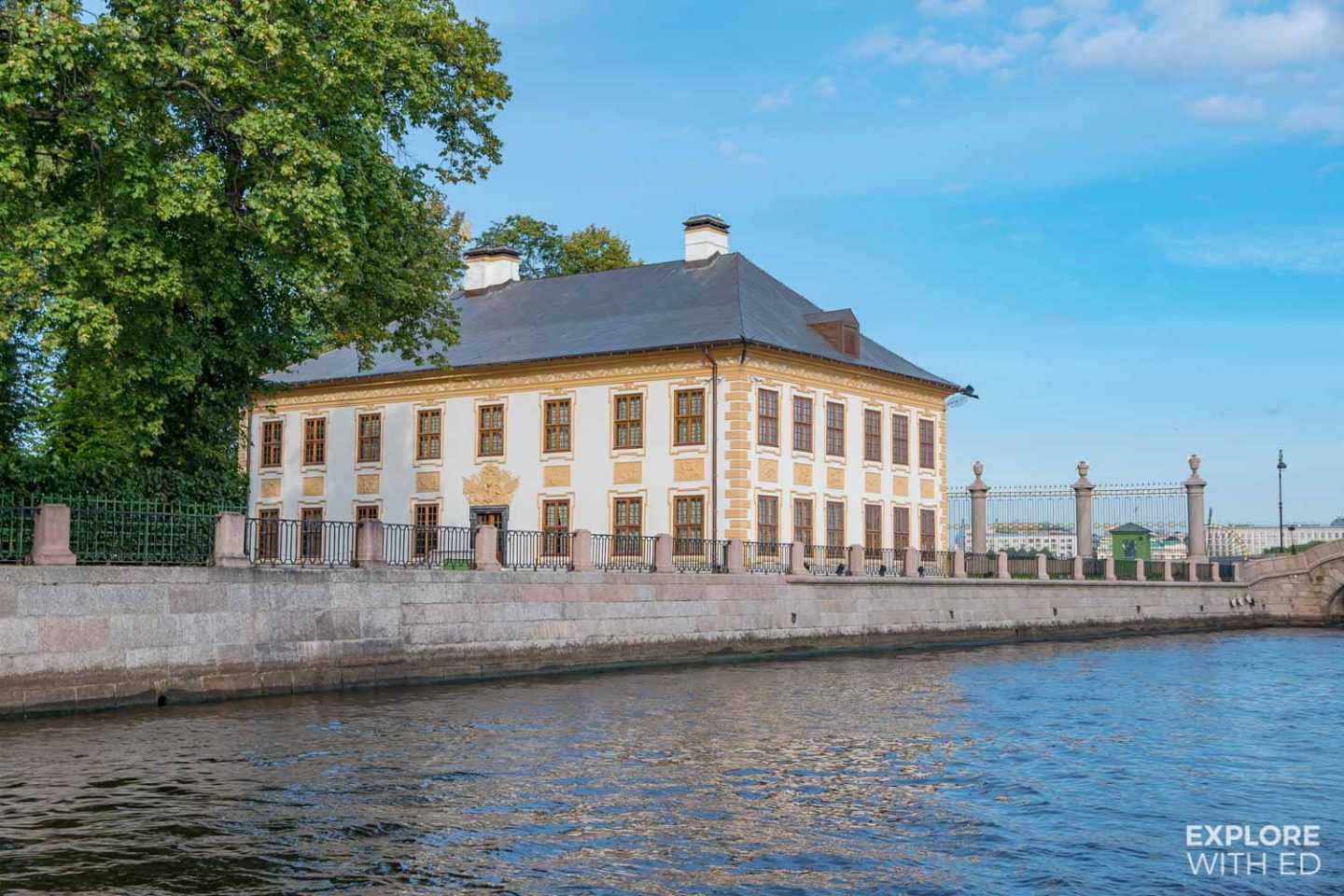 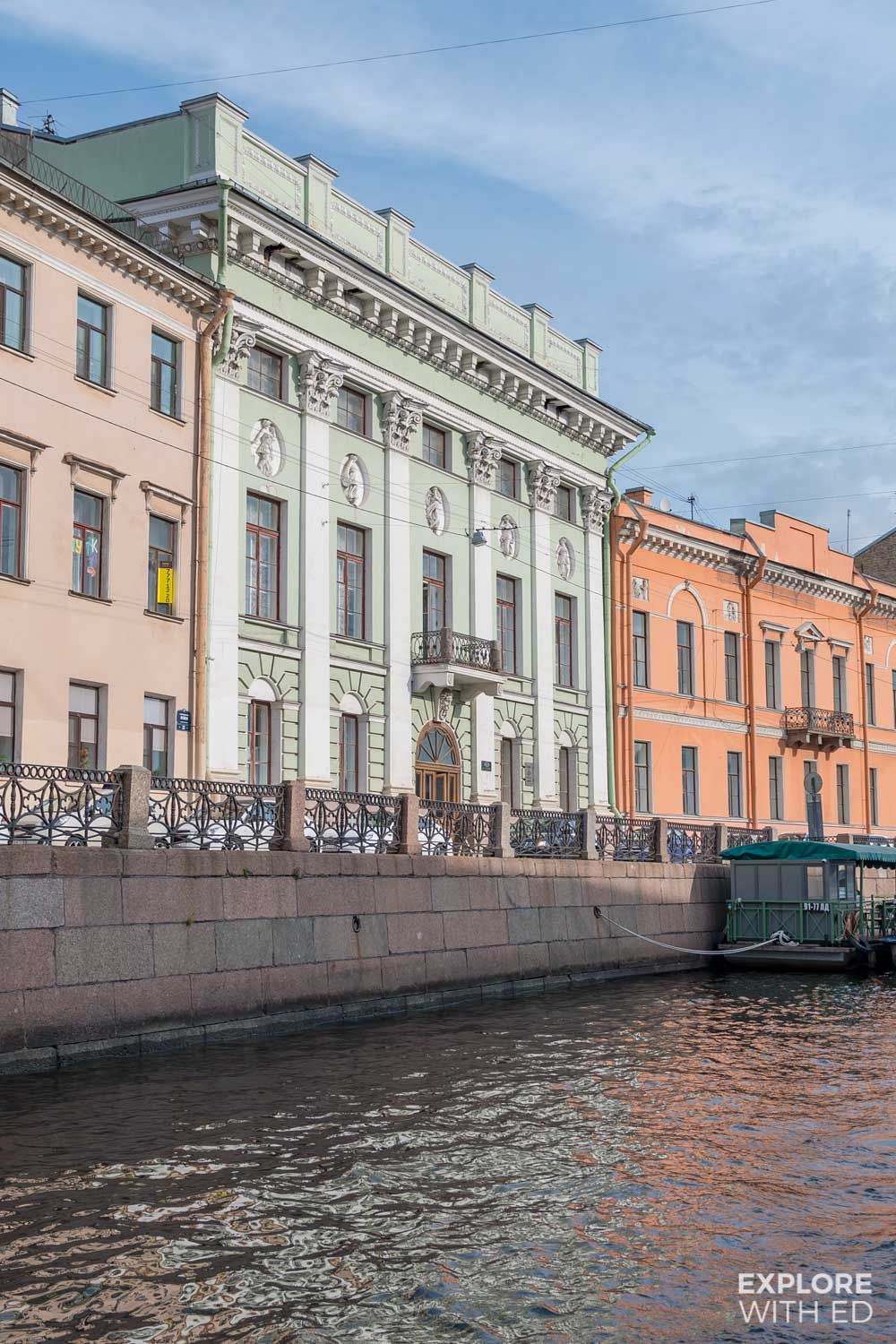 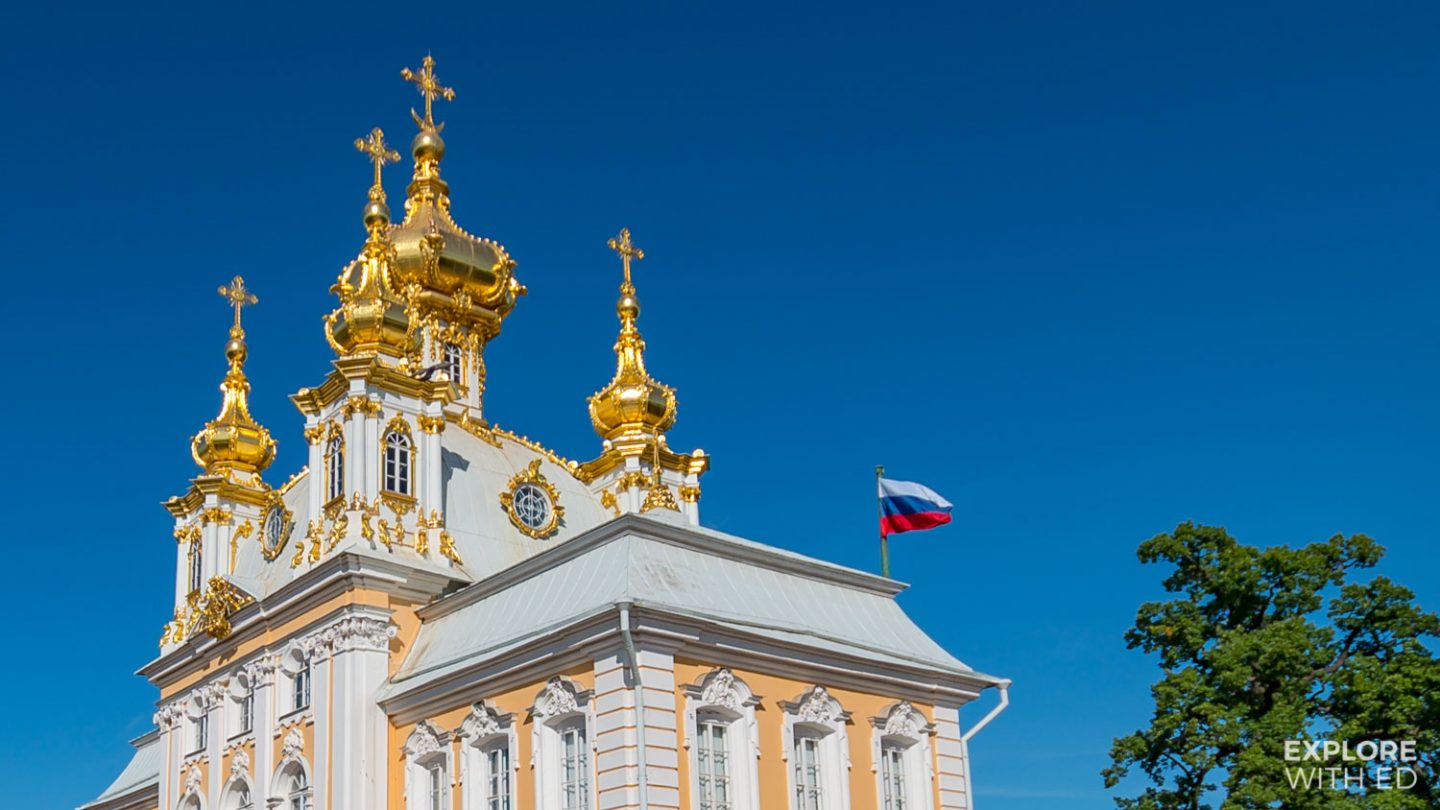 Exploring Catherine The Great’s Palaces in Saint Petersburg was a breathtaking five-star experience spanning two days with Ludmila Tours. Having a local expert bring to life the stories of this fascinating period of Russian history made it all the more memorable.

Related: Highlights of a Baltic Cruise from Southampton, England