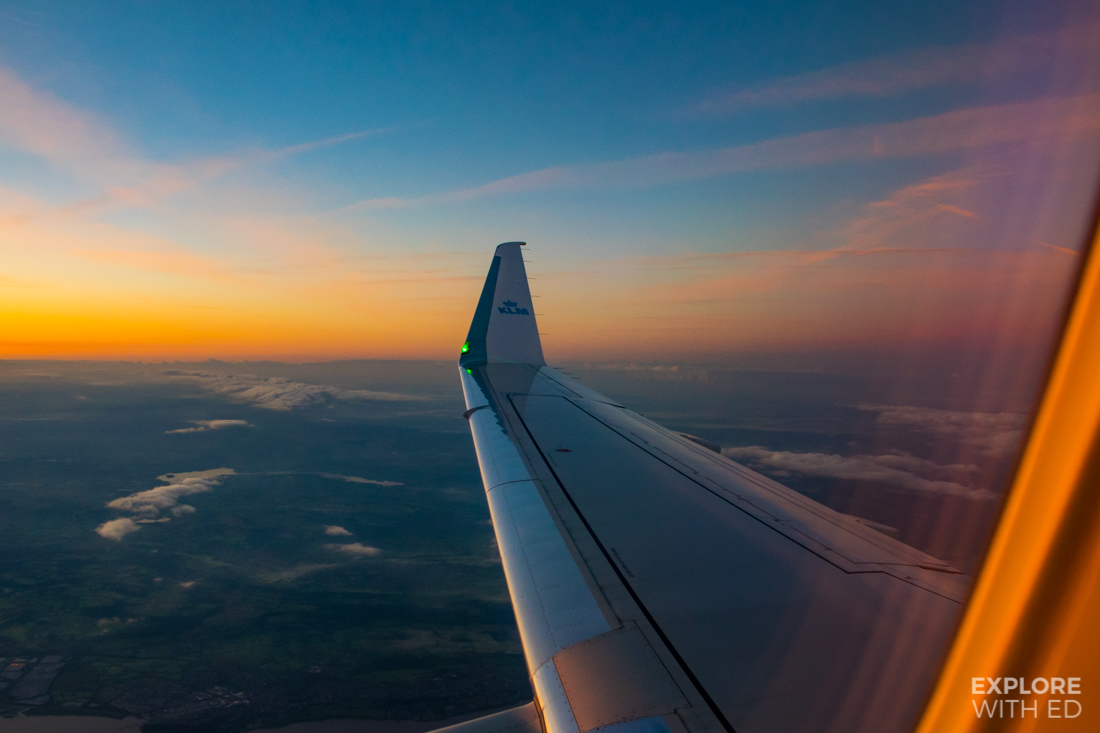 KLM’s Cityhopper from Cardiff to Amsterdam takes around 90 minutes with regular flights throughout the year. The Royal Dutch Airline is known for creating memorable moments for travellers, so I was eager to experience a taste of this myself and explore their hub at Schiphol Airport.

This trip was organised by KLM as part of their Top 10 campaign, sharing the best and most unique things about their top destinations. 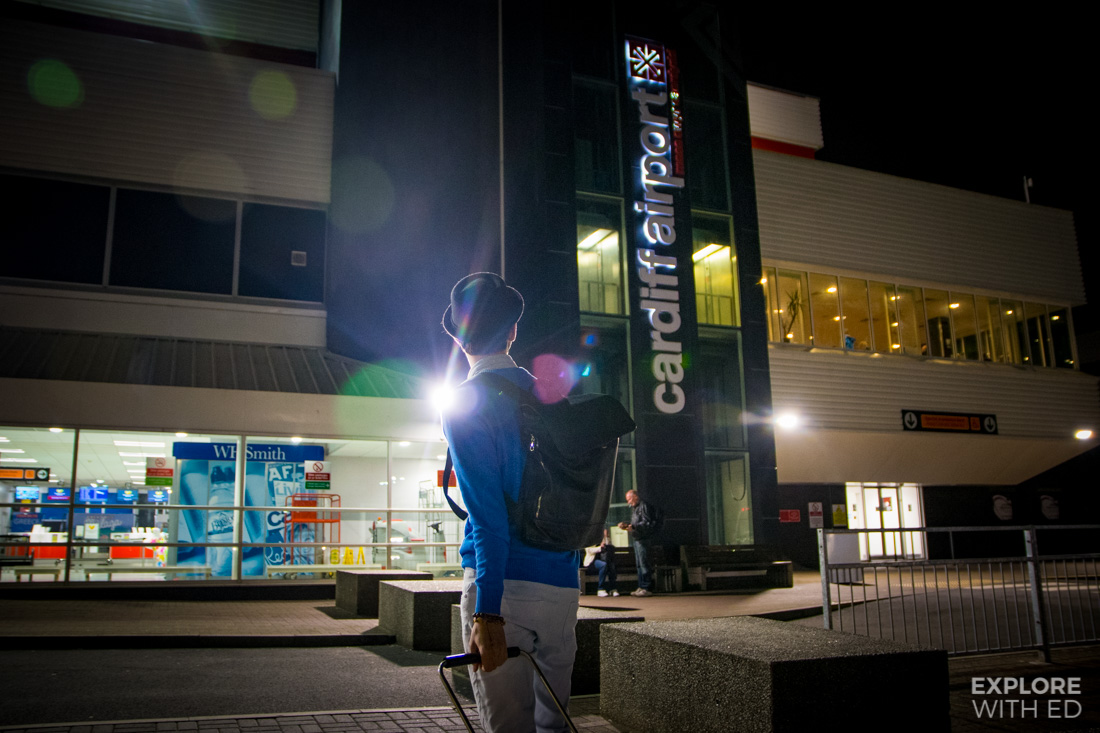 KLM fly from 17 locations in the UK, including major airports like Heathrow, Birmingham and Manchester. Schiphol Airport is a gateway to the world, you and I can catch a flight from Cardiff to over 140 destinations like Havana and Tokyo via Schiphol, including short haul destinations across Europe too. See my tips on how to plan an amazing trip to Amsterdam for inspiration.

My early flight was scheduled for 6:05am, and as the sun began to break over the horizon on a cool and clear September morning we set off after a short delay due to fog at Schiphol. 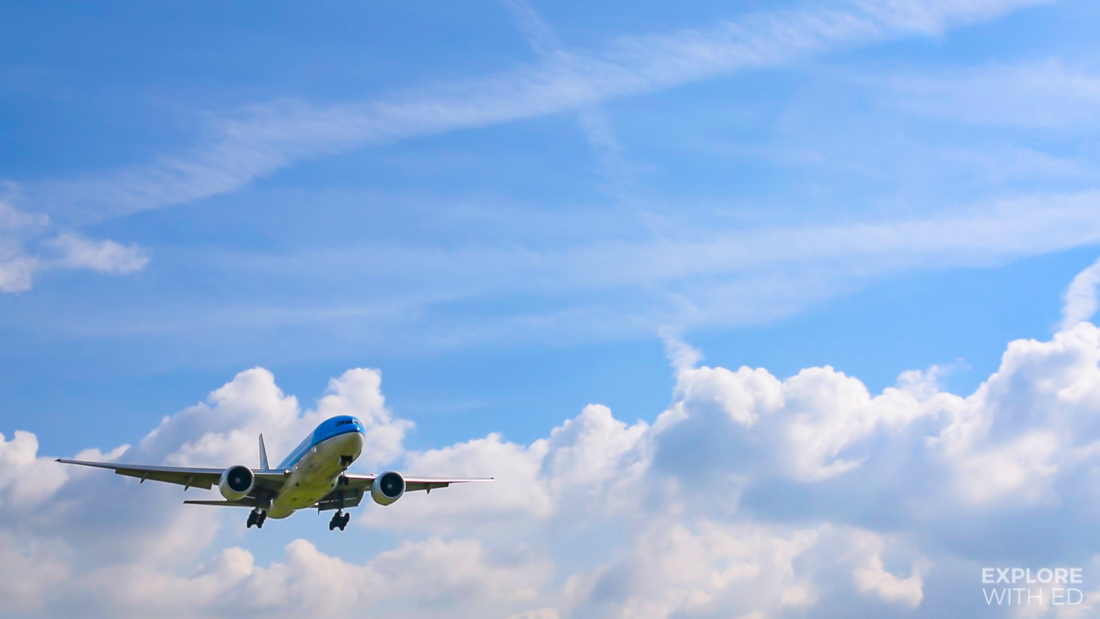 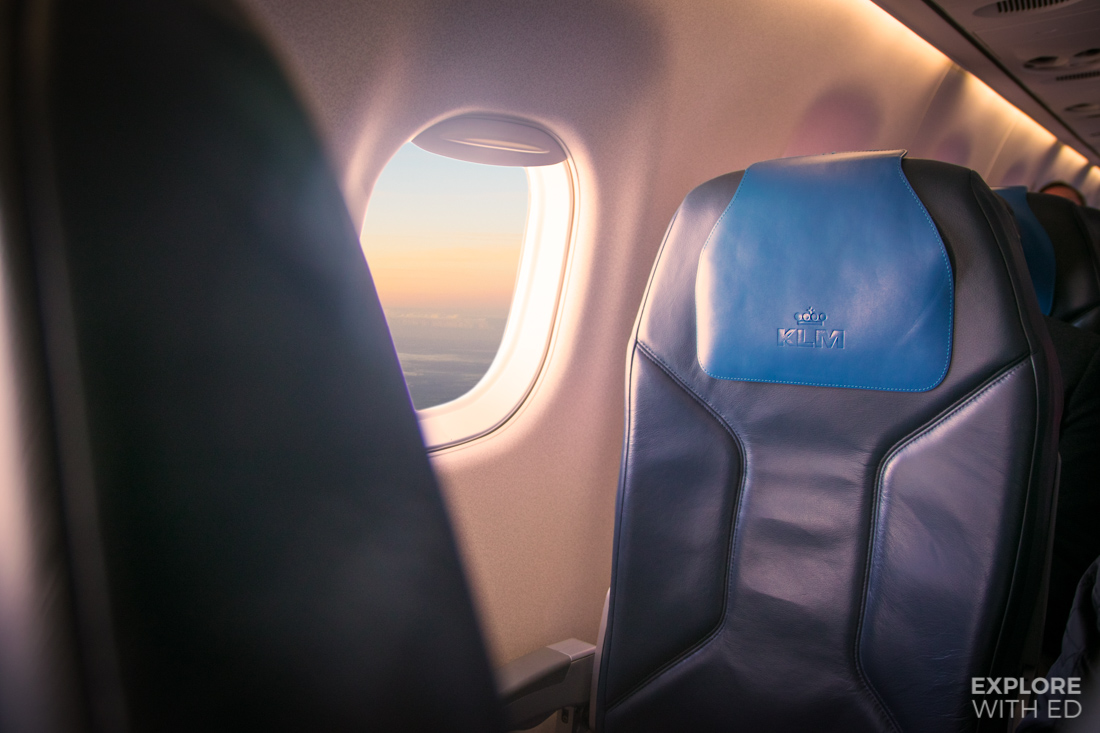 Cruising over the Welsh coast and past the Severn Bridge, the crew wasted no time offering tea, coffee and juice to passengers followed by a sandwich, neatly packaged in KLM’s royal colours. Even though my stomach was yet to wake up, it’s a nice touch for a short haul flight. 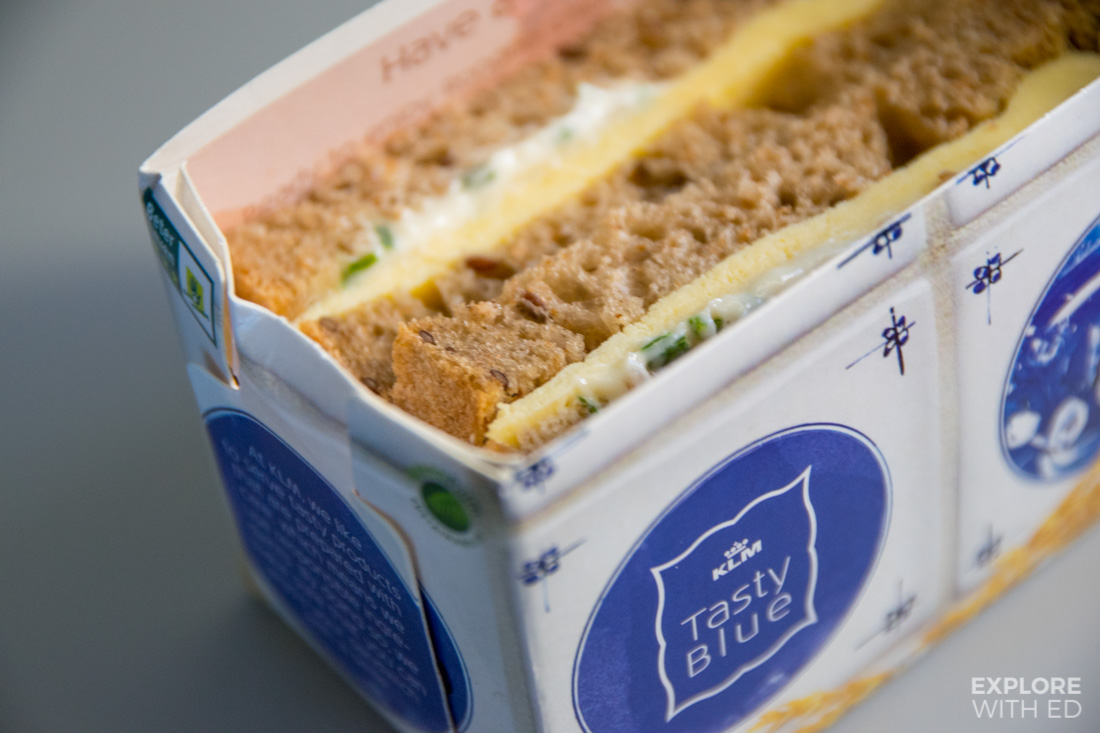 The deep blue leather chairs were comfortable enough for the duration and there’s a decent amount of leg room that you can increase with an Economy Comfort seat towards the front for a small additional payment. 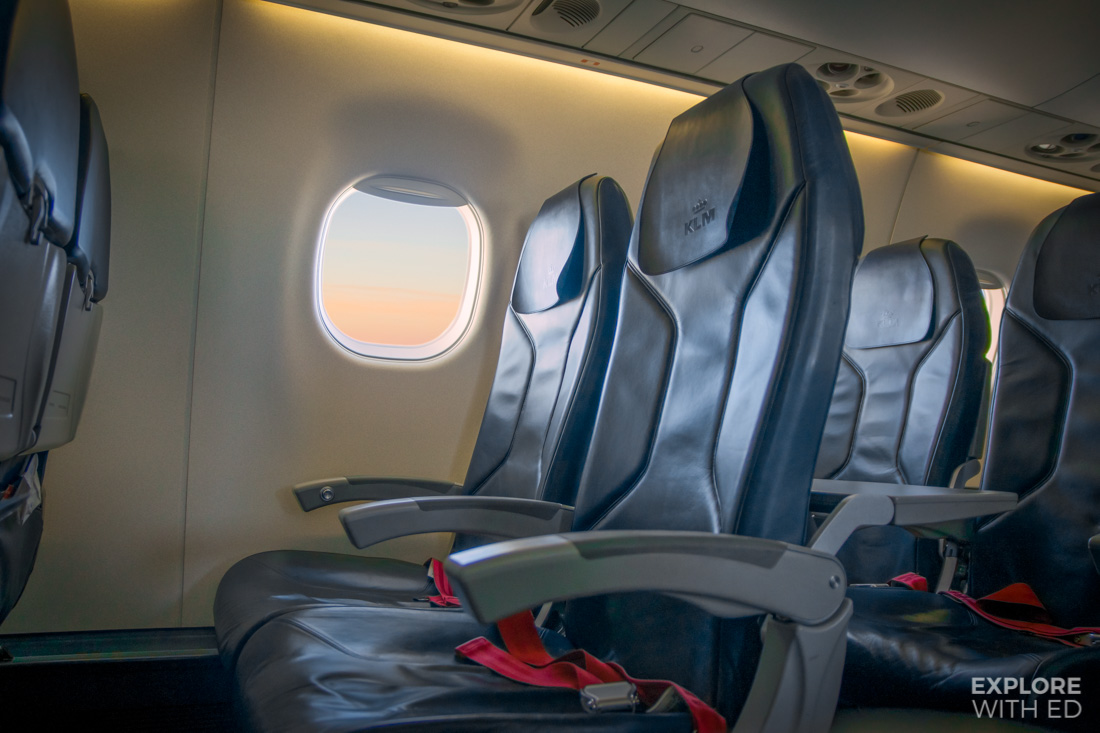 The cabin crew were giving passengers catching connections at Schiphol live updates about their flight, the gate and how to get there. Schiphol is a large airport, but the fact you’ve already gone through check-in and security in Cardiff’s small and easy to navigate airport means this whole process is a lot quicker. 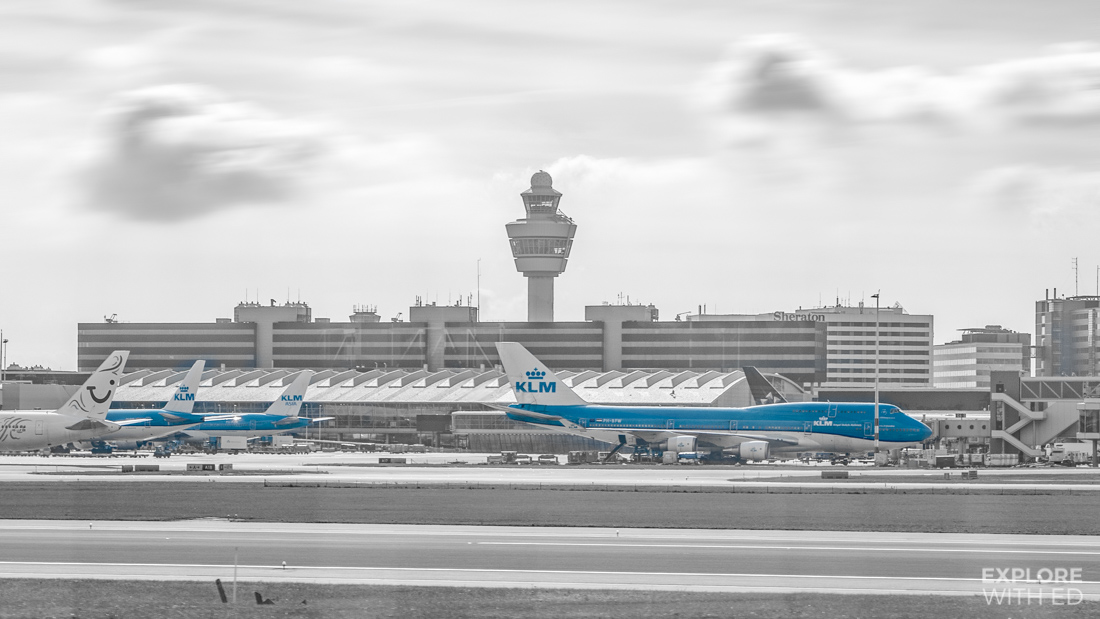 Historically I’ve found airports put a strain on my cheery disposition; the queues, security process and dashing crowds at times leave me a little frazzled. If I was faced with a delayed flight or early arrival, Schiphol would now sit at the top of my list of airports I’d rather be in to while away the extra time. 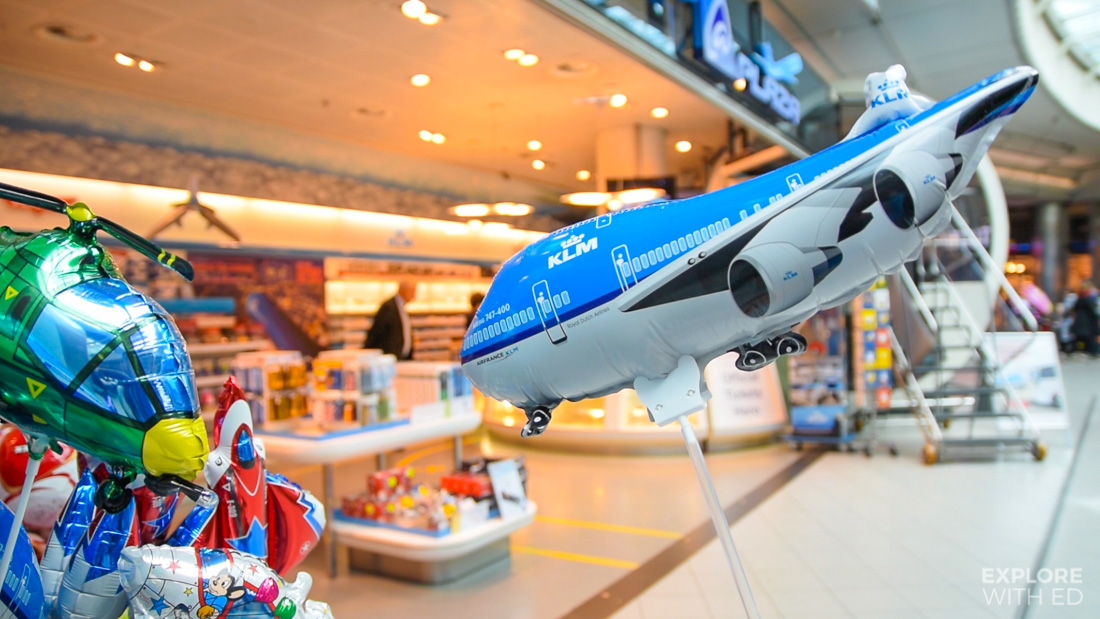 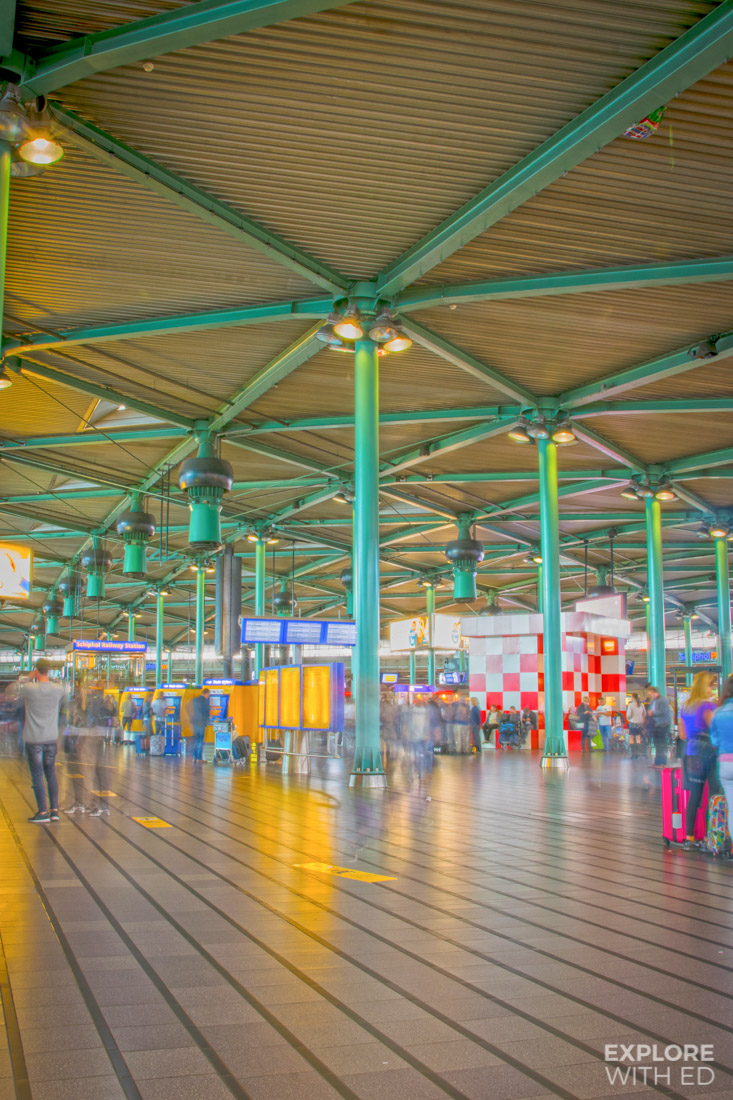 Fashion retailers like H&M and G-Star line the Terminal like a shopping mall, and several restaurant hubs offer anything from Indonesian cuisine at ‘Toko to Go‘ to local flavours at ‘Dutch & Delicious‘. 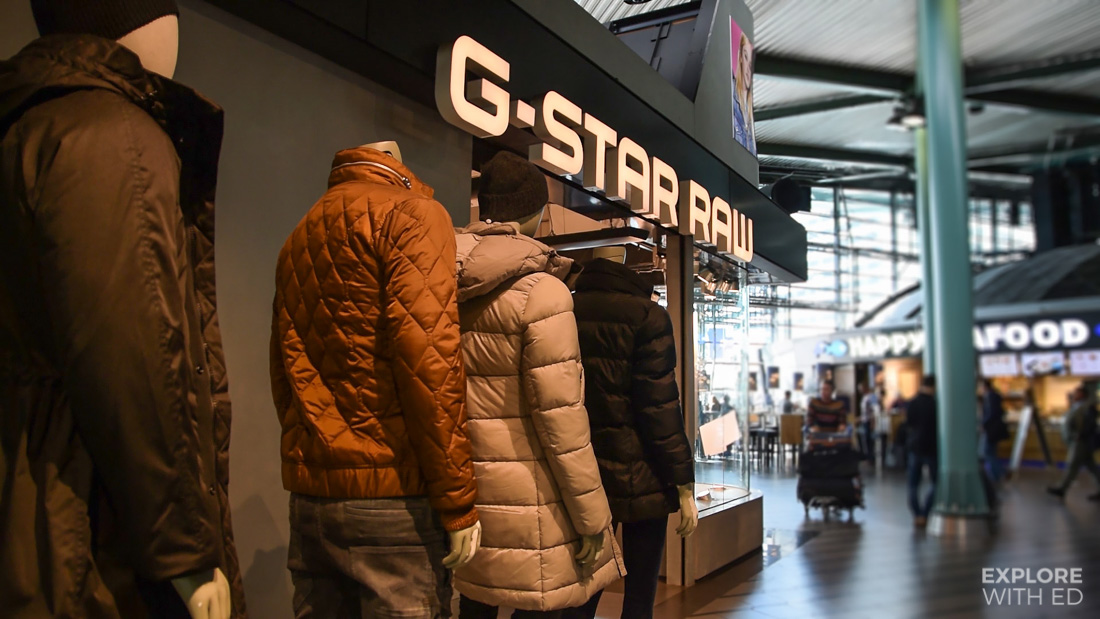 A Leafy Airport Park
There’s also some unusual extras at Schiphol such as a spa, mini-museum, Airport Park and Panorama Terrace containing a KLM Fokker 100 plane that you can go inside. Having access to a calm space away from the rush is right up my street, if only all airports had something similar so we could all sneak away from the Duty Free, sit back and watch the planes in the outdoor air… 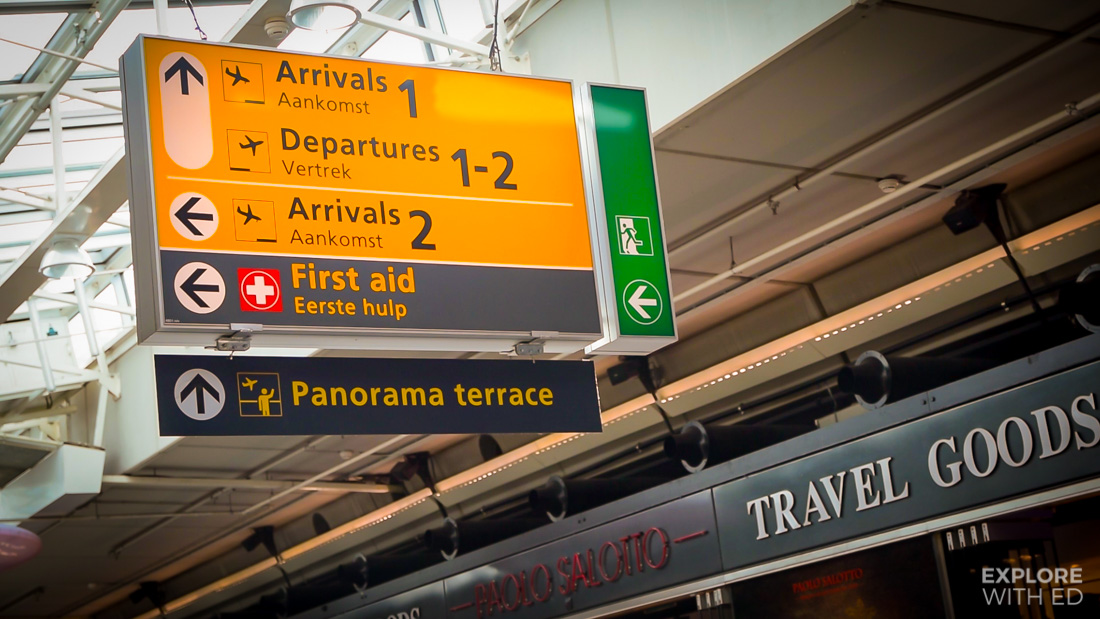 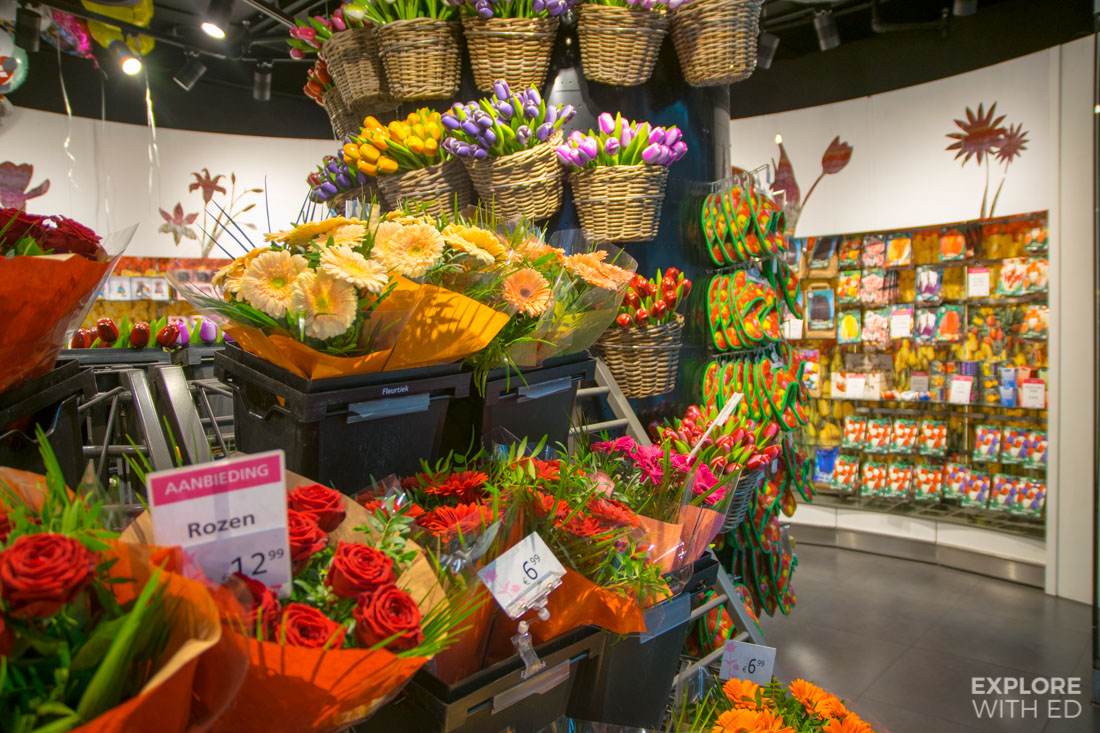 Schiphol’s plaza is also a haven for photographers, and you can take a challenging quest called ‘The Riddling Route‘ or book a behind the scenes tour online. After a bus tour across the airport grounds I participated in a photo challenge myself in the vast Departure area where the popular man in clock is located. 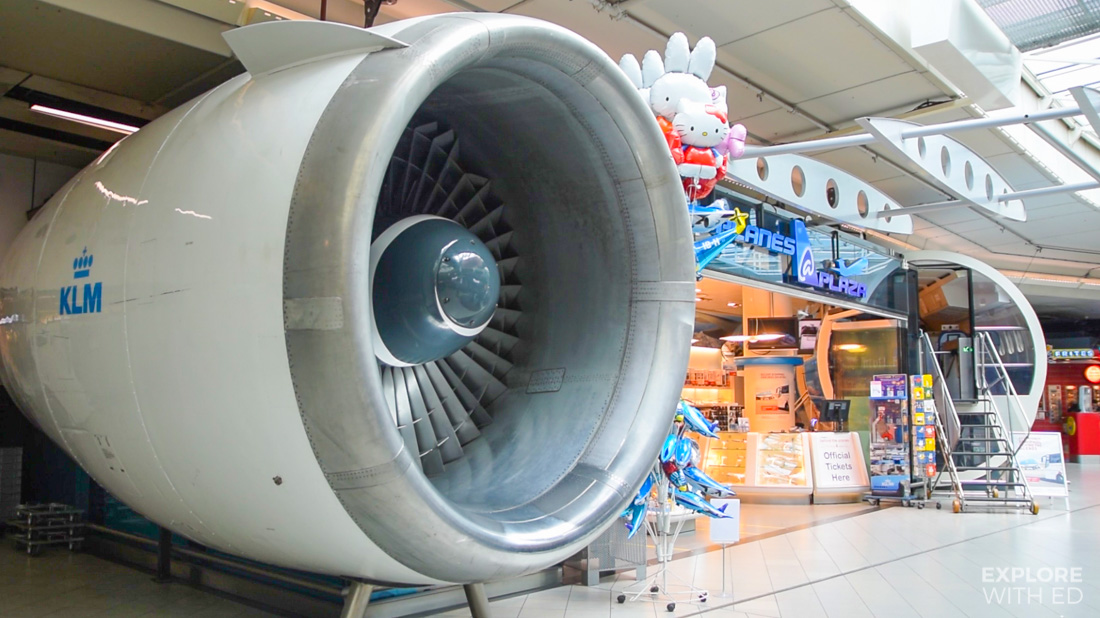 Schiphol is not all style and no substance, their research into sustainability and responsible use of energy is quite remarkable. The buses that shuttled me to and from the city hopper aircraft were all electric, there’s bio-based outdoor seating and the baggage conveyers and lighting are all energy efficient. The airport is also aiming to become a ‘zero waste Airport‘ in the years to come. 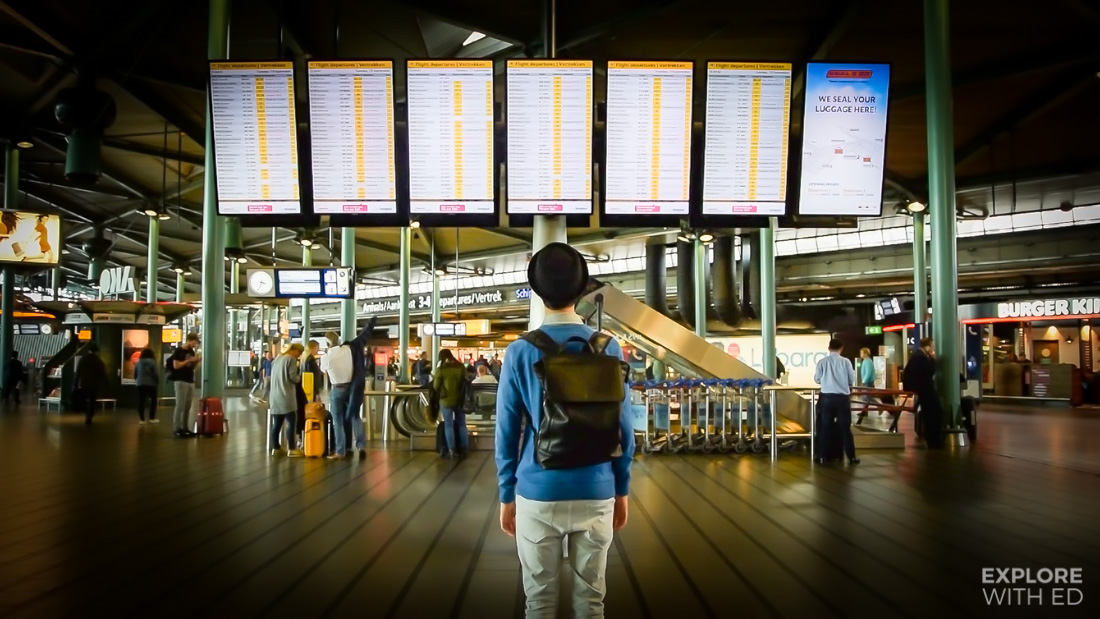 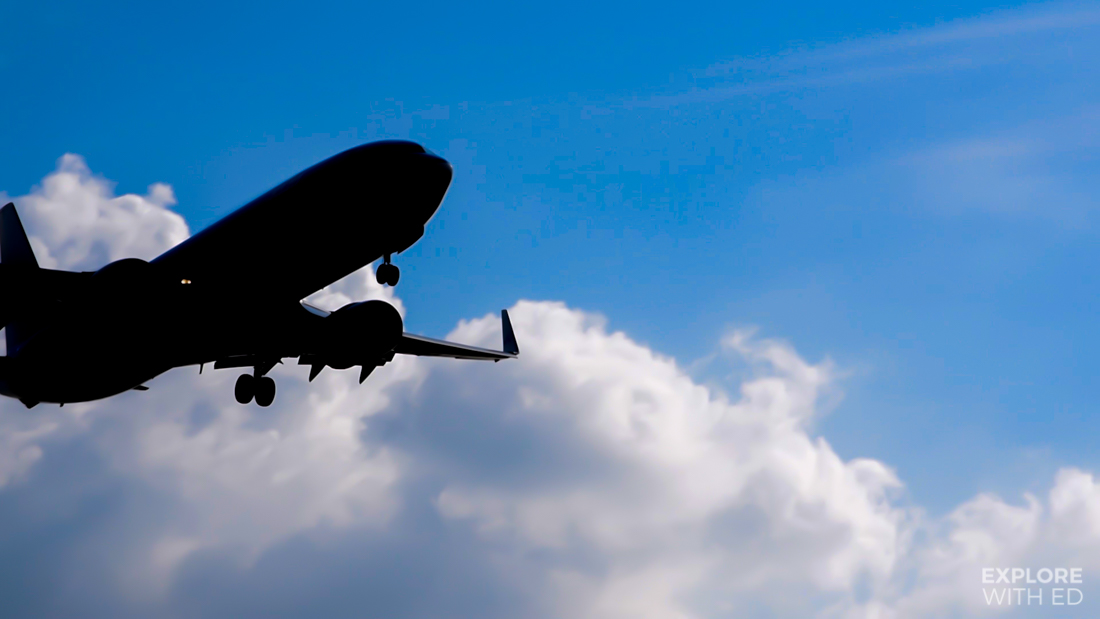 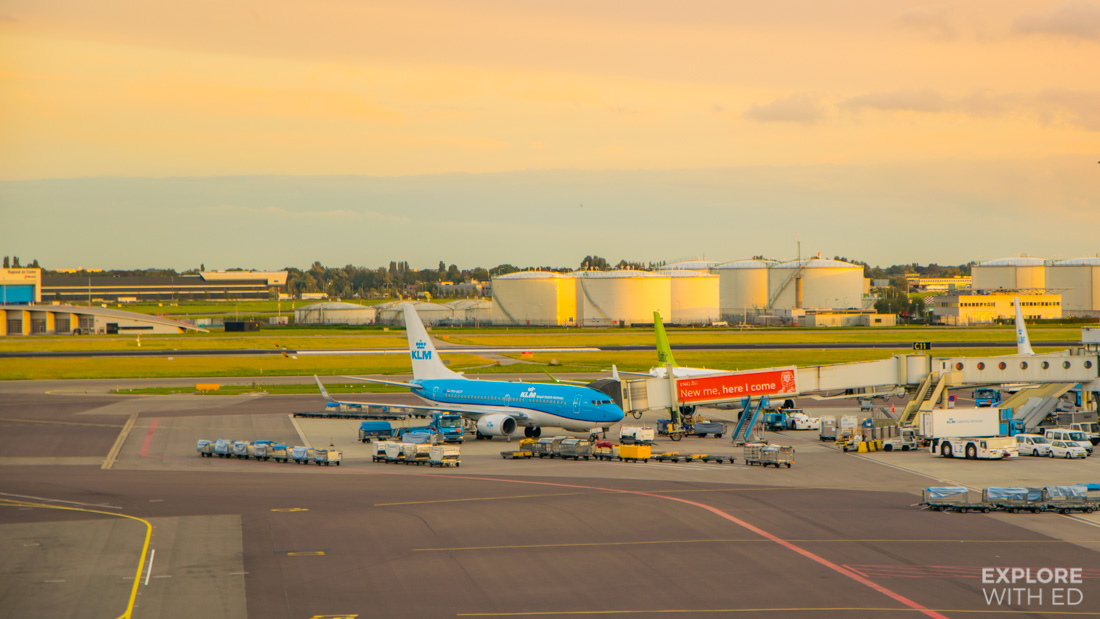 Transferring to Amsterdam city centre from the airport was also much easier than I thought, the train station sits beneath Departures and the service is regular and quick taking just 15 to 20 minutes. 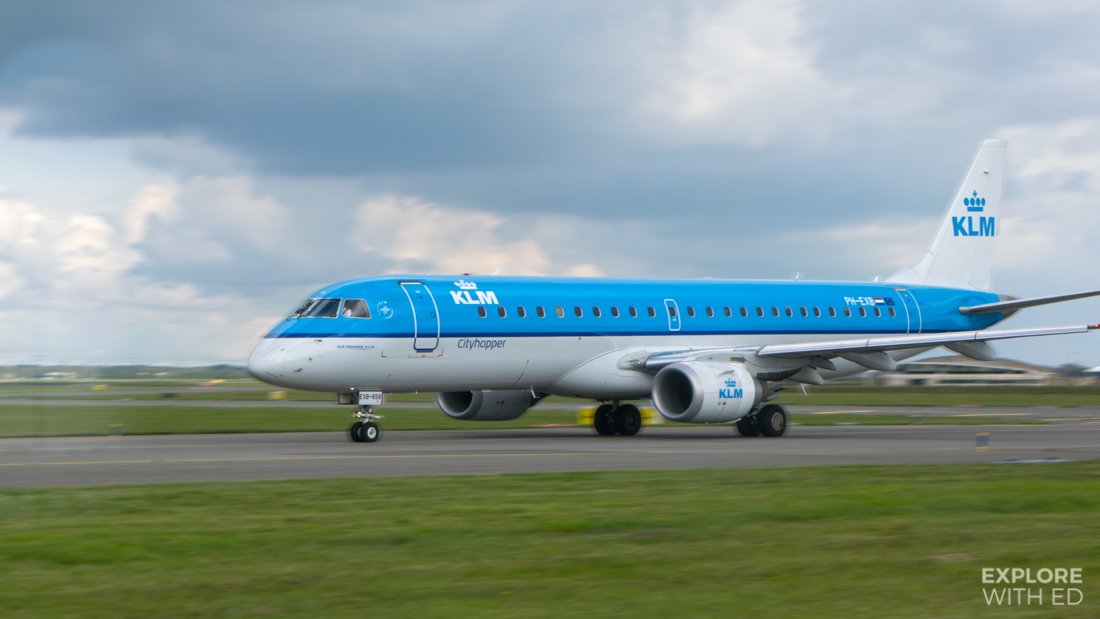 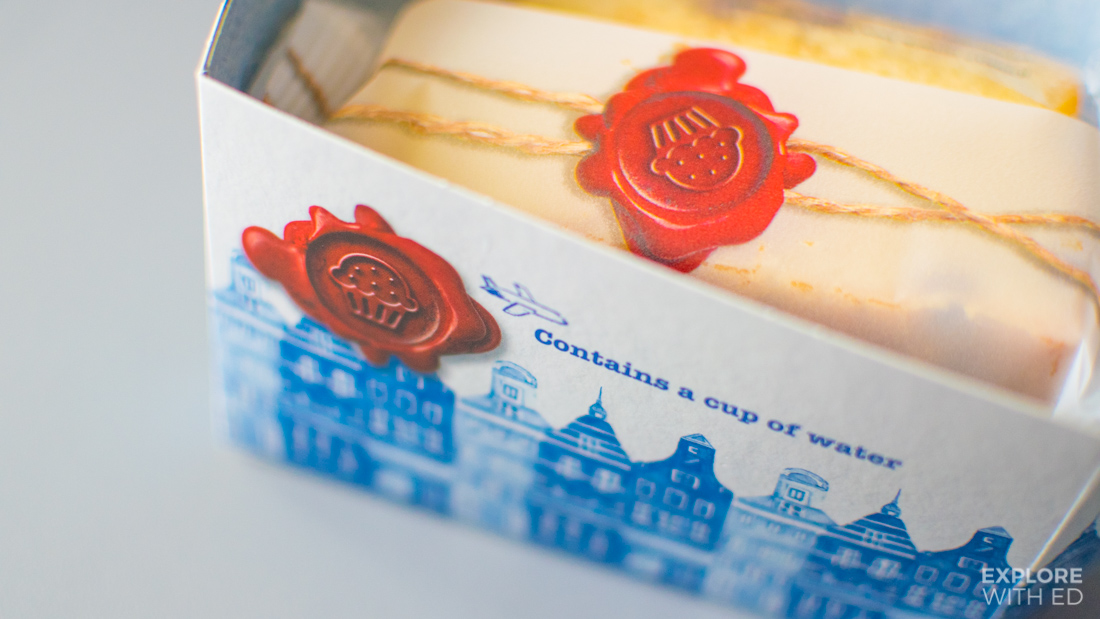 My 9:10am return flight left right on time, a bonus being strong tailwinds reduced the scheduled flight time to just 55 minutes! Service was just as pleasant, the only difference being the sandwich was swapped for a loaf of cake and a carton of water, ensuring my Amsterdam trip ended on a rather sweet note – ignoring the typically Welsh weather on arrival. 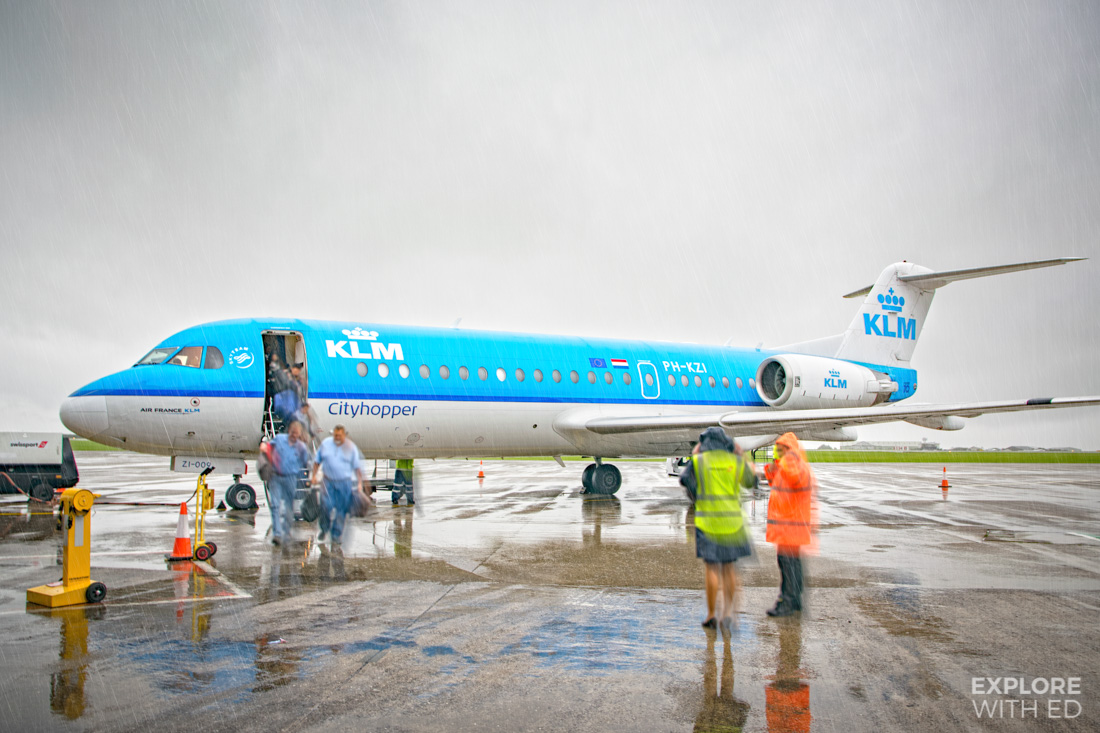 Have you flown with KLM or to Schiphol Airport before? Please let me know your experience on social media or in the comment section below…
Further reading: How to plan the most amazing trip to Amsterdam.

This blog and video has been sponsored by KLM as part of the #KLMTop10 campaign. As ever, all opinions are my own.