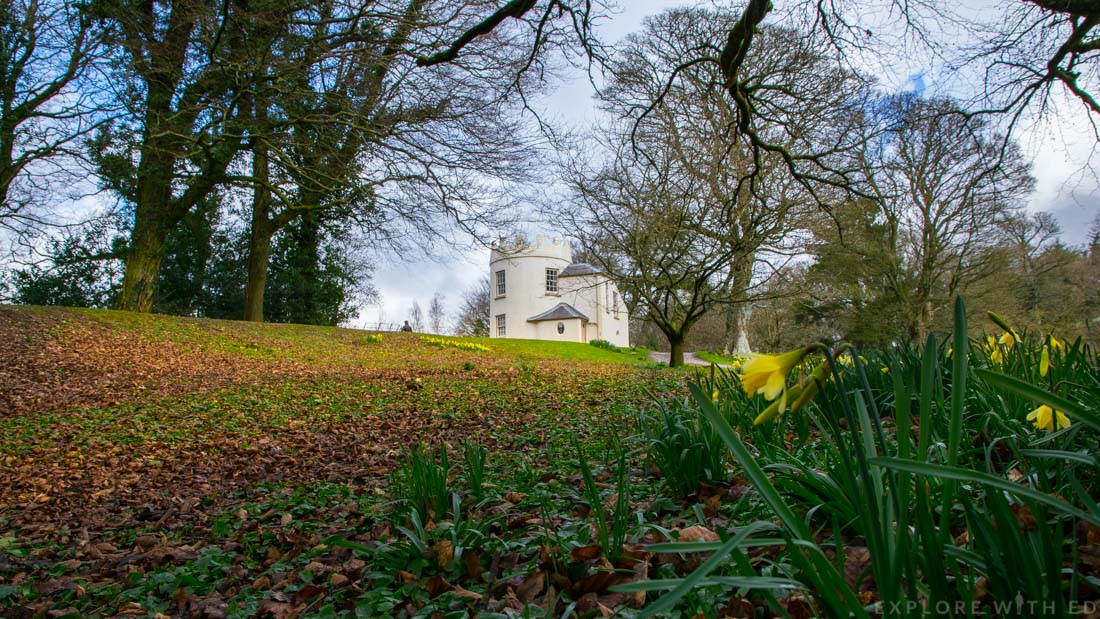 Spring is a beautiful time in Wales where the countryside bursts into colour, wildlife (and most folk) awake from winter’s rest and the weather becomes very dynamic.

To enjoy the emergence of springtime I was invited to experience a Real Wales Tour in the wonderful Wye Valley. The new company hosts small group tours (maximum of six people) across Wales, including a beach itinerary in the beautiful Gower region and a Welsh heritage tour on the outskirts of Cardiff – so there’s something to appeal to all tastes.
The tour durations currently vary from one full day to seven, however they are flexible and may be able to accommodate your wants and wishes – even those desiring a tour with their children or have accessibility requirements. 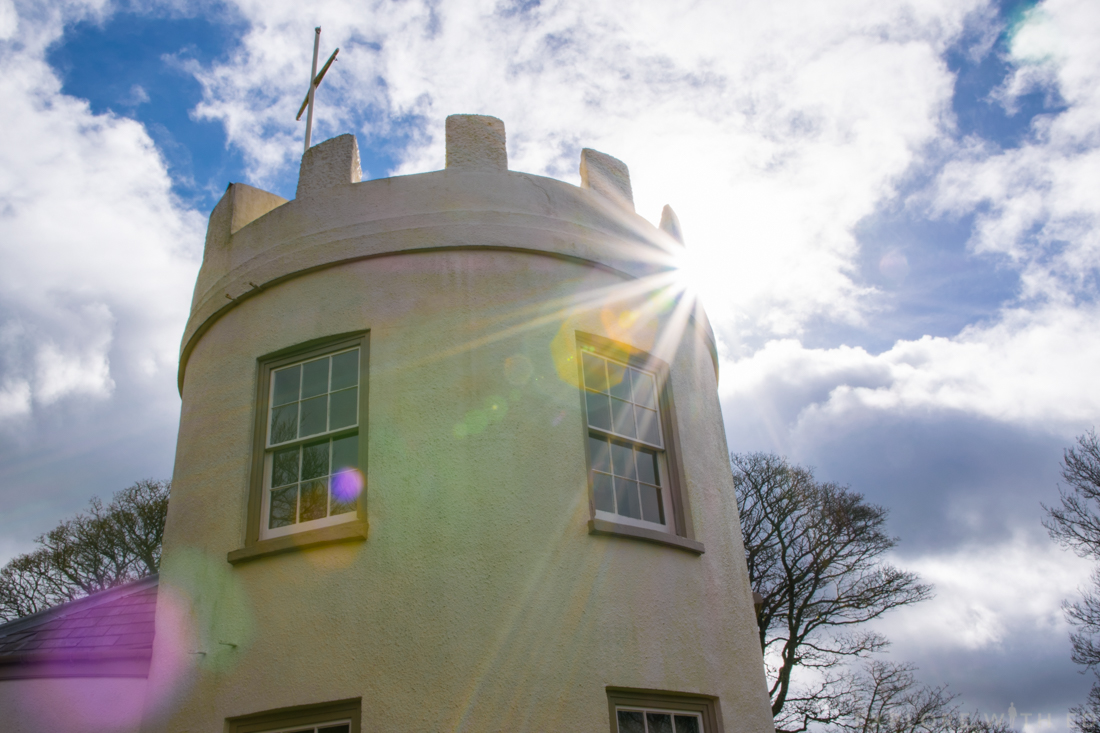 My Wye Valley tour began at Chepstow rail station, my chosen pick up point. Real Wales Tours are able to pick you up and return you to a Cardiff central location, so if you live or stay in the vicinity it’s hassle free from the get-go!

My friend and blogger Miss Nicklin joined me on the tour, and our guide Nia was very friendly and informative – in no time we were chatting like old friends as she drove us up through gorgeous countryside villages skirting the river Wye to Monmouth. 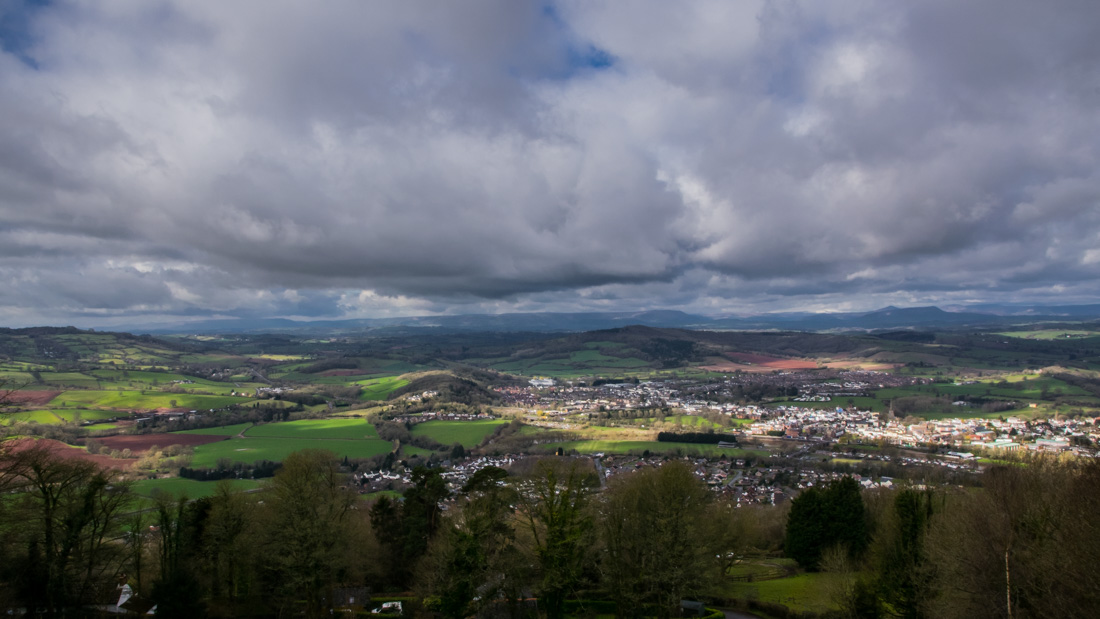 Just above Monmouth is The Kymin, a national trust building created many years ago by local gentry who wanted somewhere to dine during inclement weather. This popular picnic spot drew folk like Lord Nelson, who loved the beautiful views that span almost 360 degrees. Nia told us there’s hundreds of miles of scenic countryside on display here, crowned by the snow-capped mountains of the Brecon Beacons in the distance. 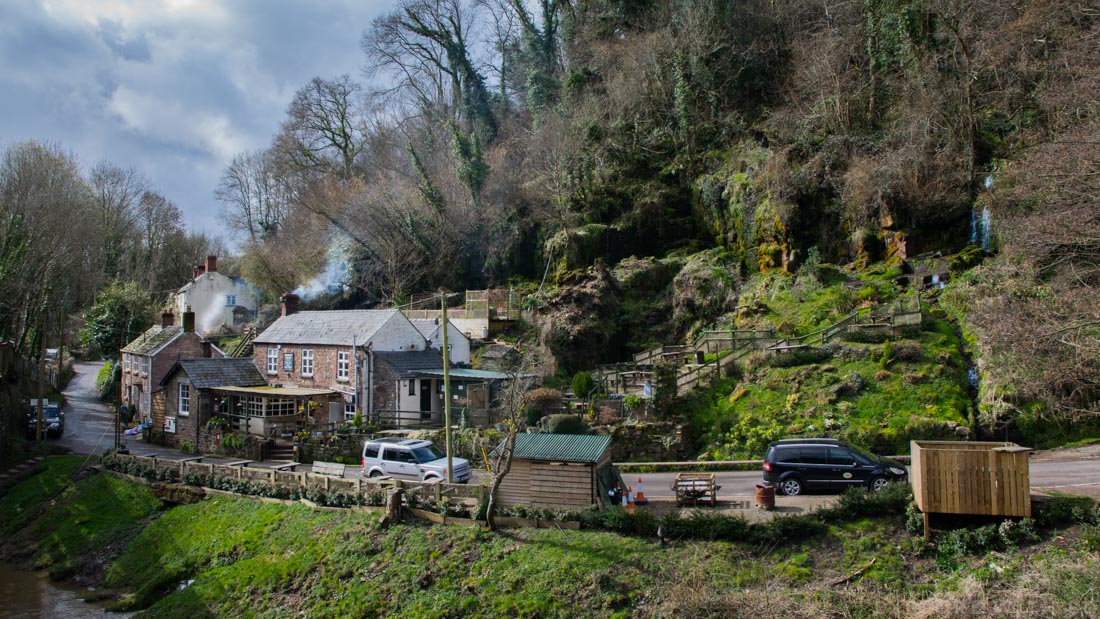 We then headed down to Penallt Viaduct, walking across an iron bridge that actually crosses the border from Wales to England.

Besides the weathered bridge with disused rail tracks, there’s little sign of a robust heavy industry that once thrived here. The Boat Inn nearby is a charming and quaint country pub sitting peacefully on the river bank with a garden laced with trickling streams. 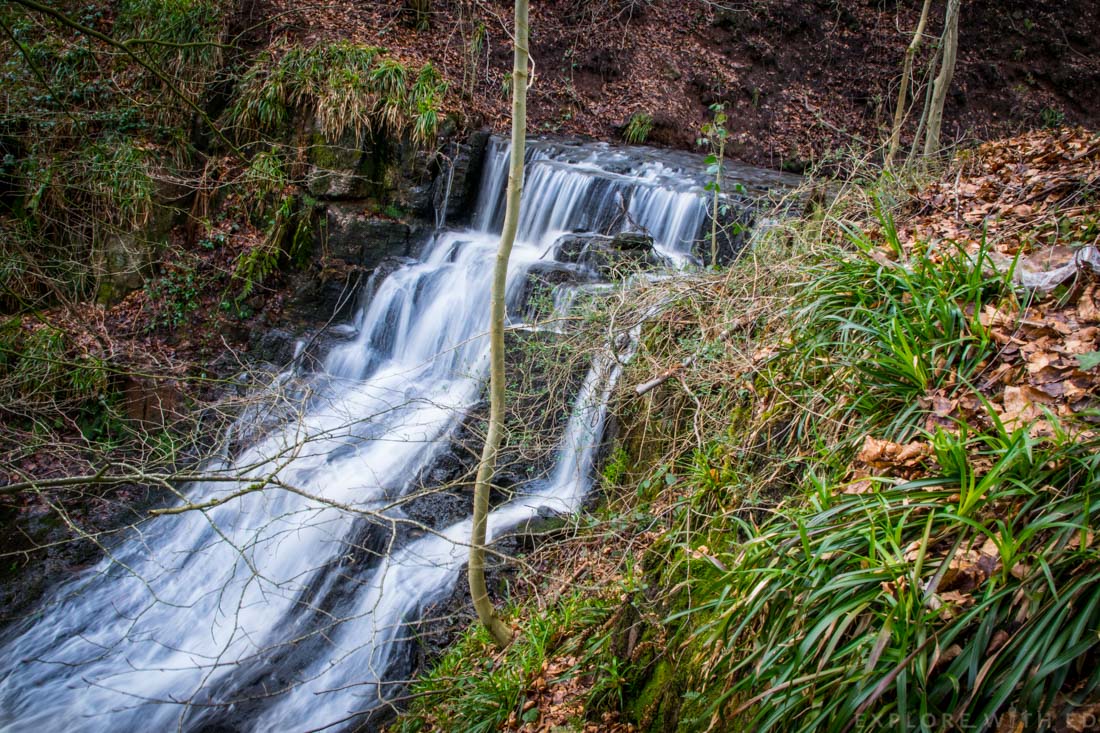 After these two brief stops we drove to Whitestone woodland park for a gentle forty-five minute stroll to see the bluebell fields and waterfalls.

Before we headed off Nia kindly offered us tea or coffee from a flask as well as Welsh made chocolate and some rather unique crispy seaweed. 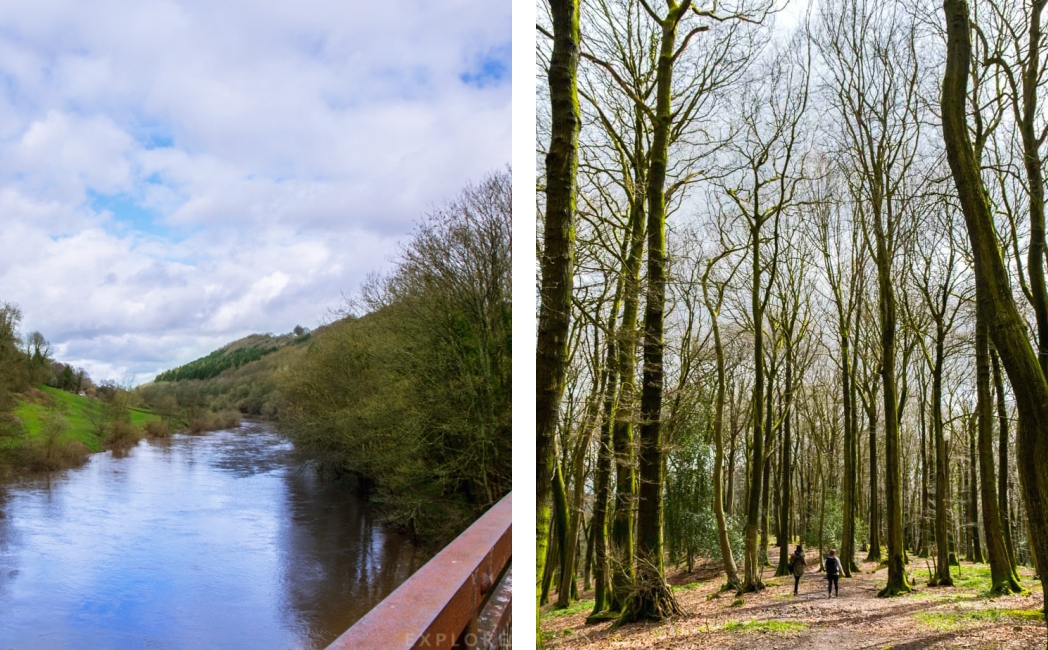 Interestingly the poet William Wordsworth was inspired by the views along this trail and some quotes can be seen chiseled into the benches along the way. It’s easy to see why he would’ve loved this part of Wales with many attractive views down into the valley.

On our lovely walk we spotted honeysuckle and moss thriving in the clear air and the vast bluebell fields that had unfortunately not yet come into bloom (although I’m keen to return later in April or May to see them). 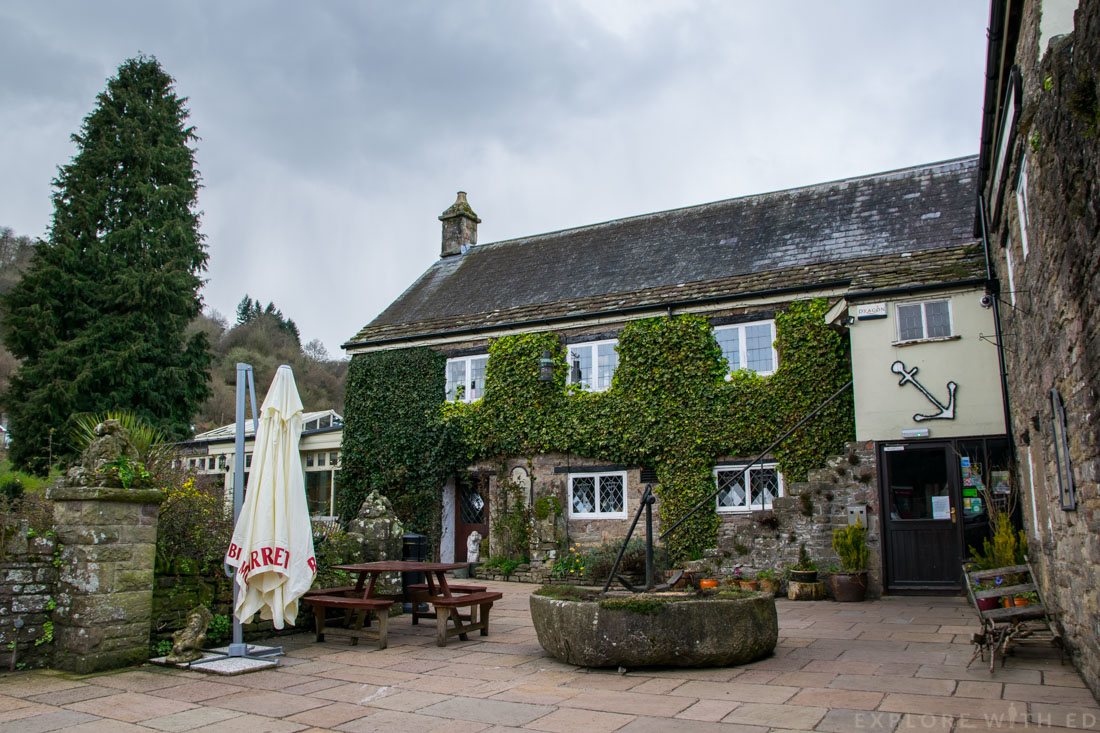 We had lunch booked for 1pm at The Anchor Inn in Tintern where Nia dropped us off and would later return to collect us.

Real Wales Tours provide each person with a £10 supplement for their meal, so bring cash if you think you’ll be extra hungry or would like to purchase local souvenirs. 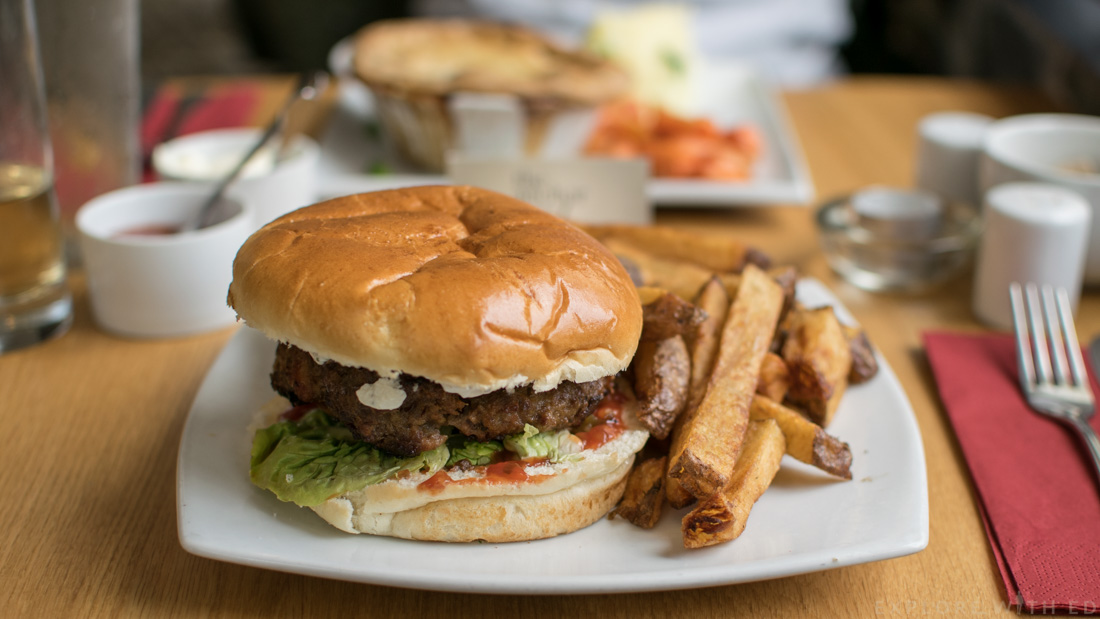 We tried the Anchor Burger and Anchor Pie – both dishes were really tasty and I was particularly impressed by the soft and meaty burger patty and homemade chips.

The pub is very cosy with a traditional style restaurant on one side and an open, airy tea room with views over to the Abbey on the other. It was at the Abbey where our tour continued… 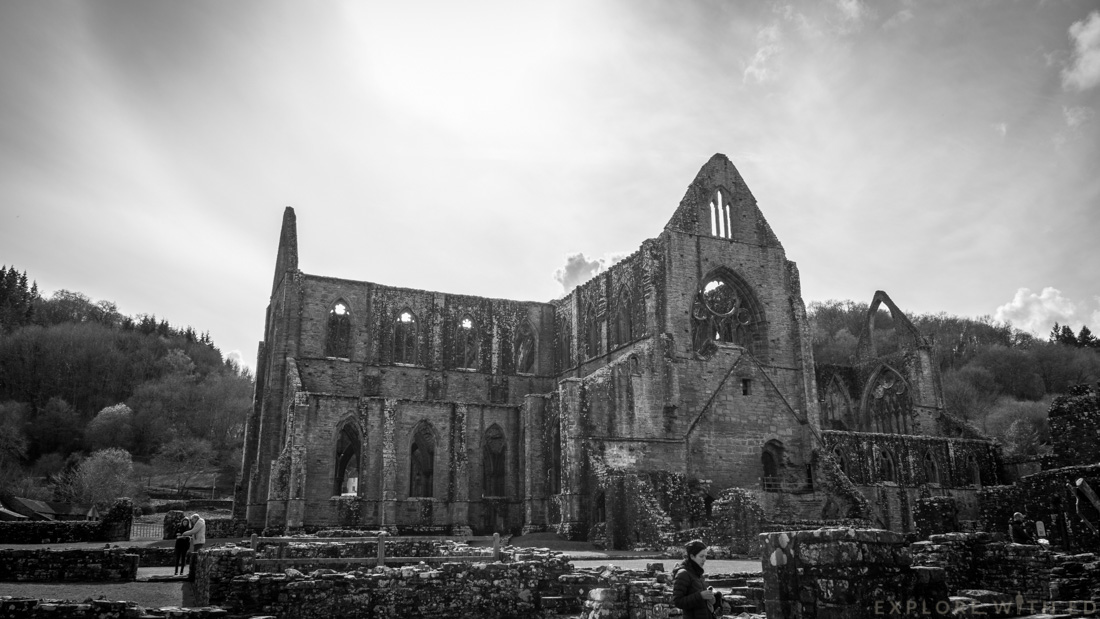 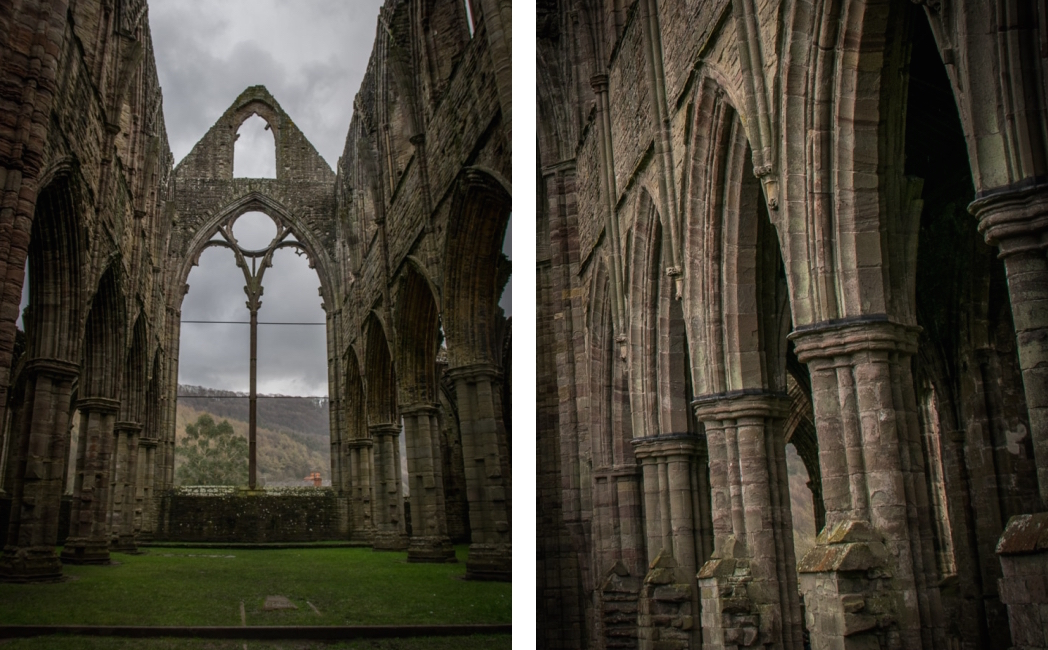 I’ve visited Tintern numerous times but have yet to explore the Abbey itself. It’s a very impressive structure to stand beneath and imagine how grand the building must’ve been in its heyday. 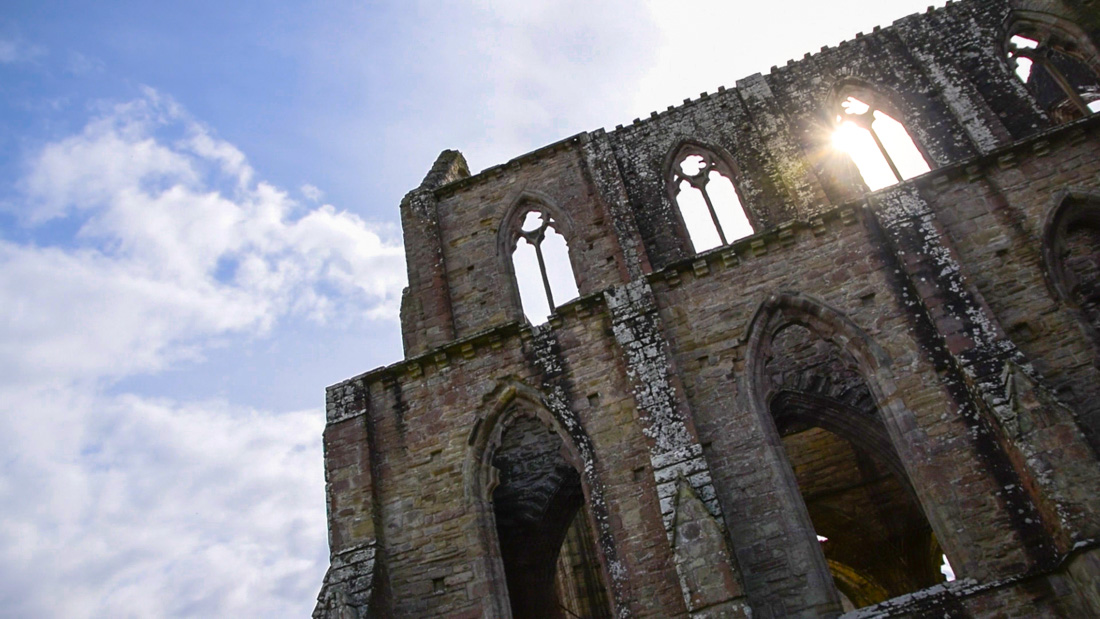 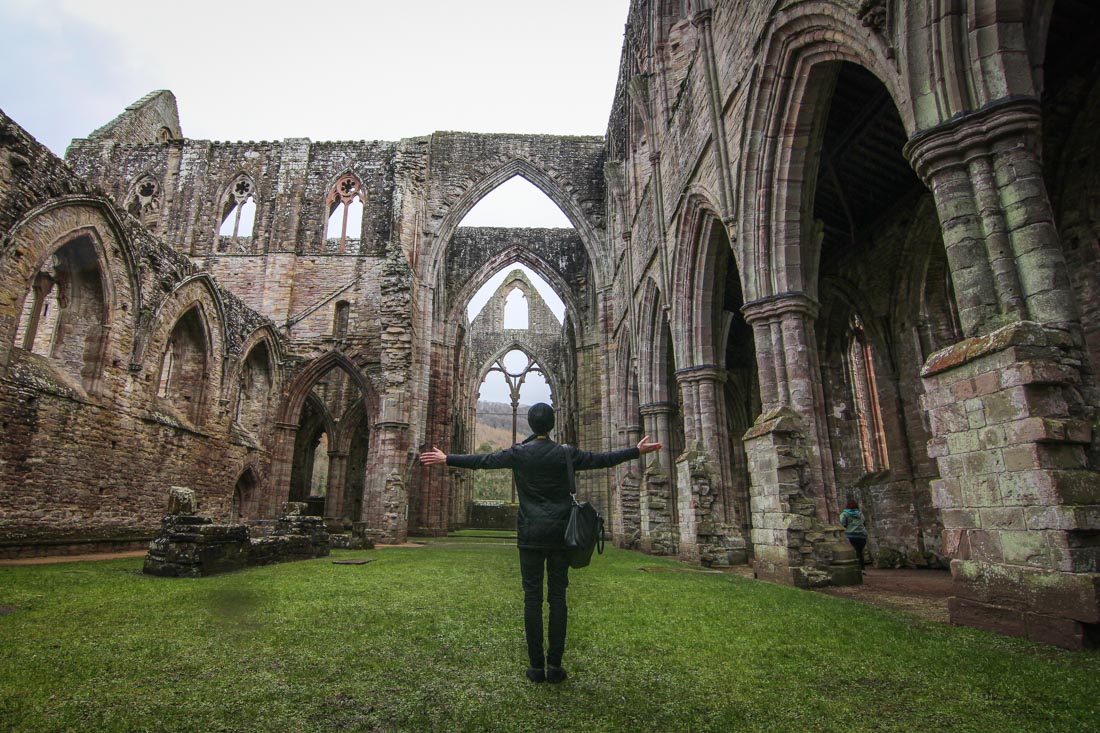 Nia explained that the Monastery was dissolved during the time of Henry VIII after a dispute with the Pope and Catholic religion.

In it’s prime, hundreds of Monks would’ve stayed and worshipped here daily as the site shows the ruins of many living areas like a dormitory and infirmary. 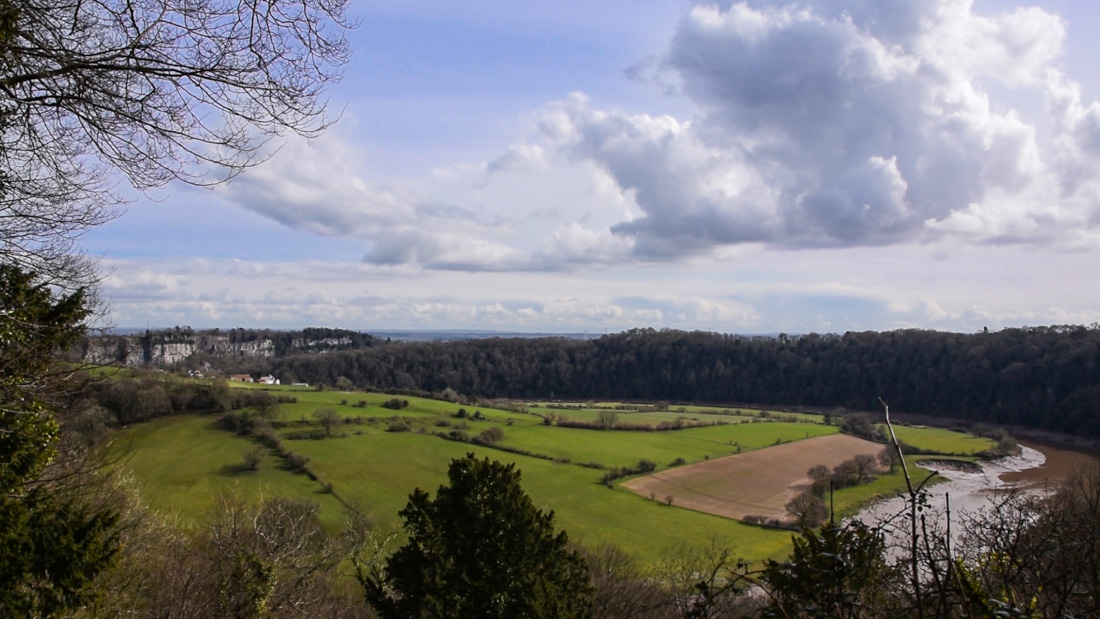 The beauty of it being a private tour is that we were asked what we would prefer to do, so you can work to your own pace (although we’re not fussy and were happy to go with the flow).

As time had ticked on in Tintern we decided to skip a walk to Devil’s pulpit and 365 steps trail (but stopped off at the base to admire the views) and instead headed straight to Chepstow Castle so we could make the most of our final stop. 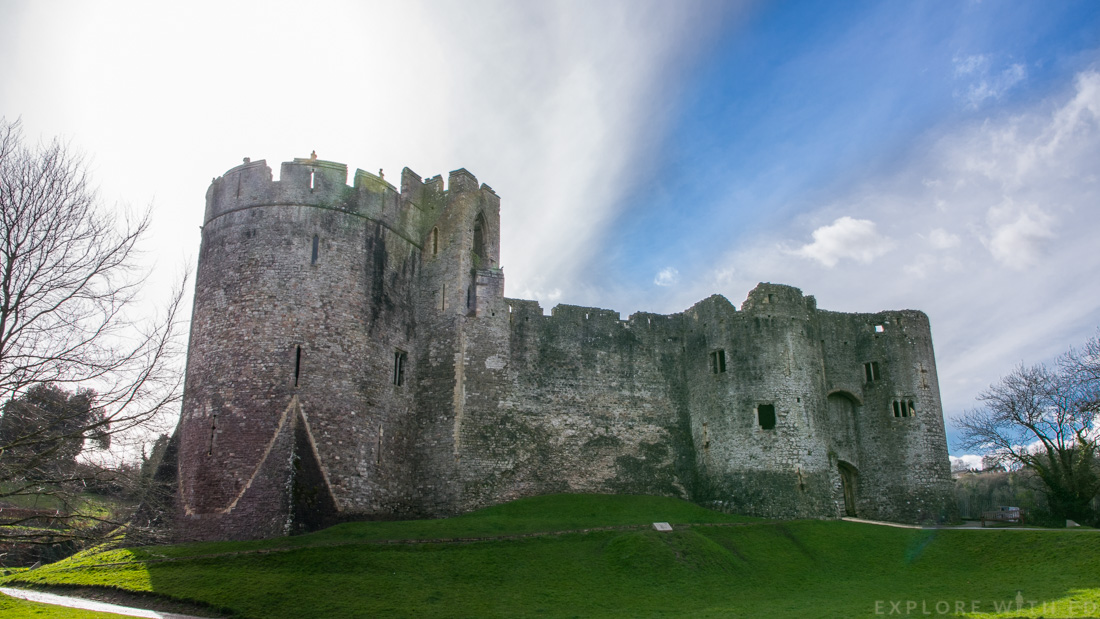 As the oldest stone fort in Britain after the Roman era, Chepstow Castle has a significant amount of history to share from the bank of the river Wye.

Unlike most castle fortresses, Chepstow’s stretches along the river in a rectangle structure as the castle was expanded multiple times over centuries gone by. 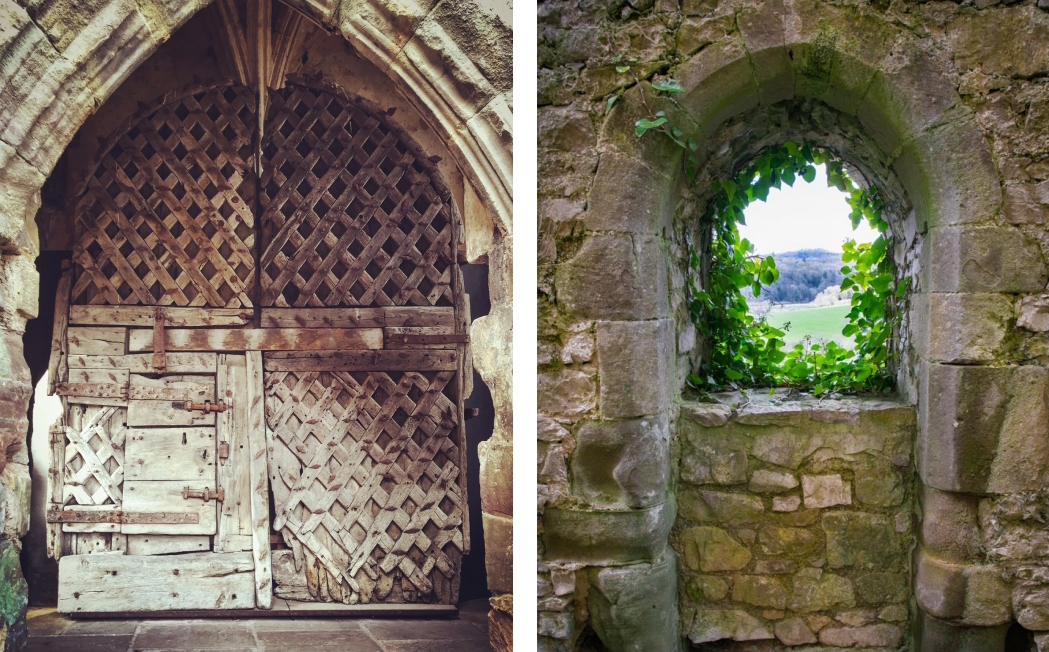 Whatsmore, the oldest surviving castle doors in Europe (around 800 years old) can be found here, as well as an eerie prison room. 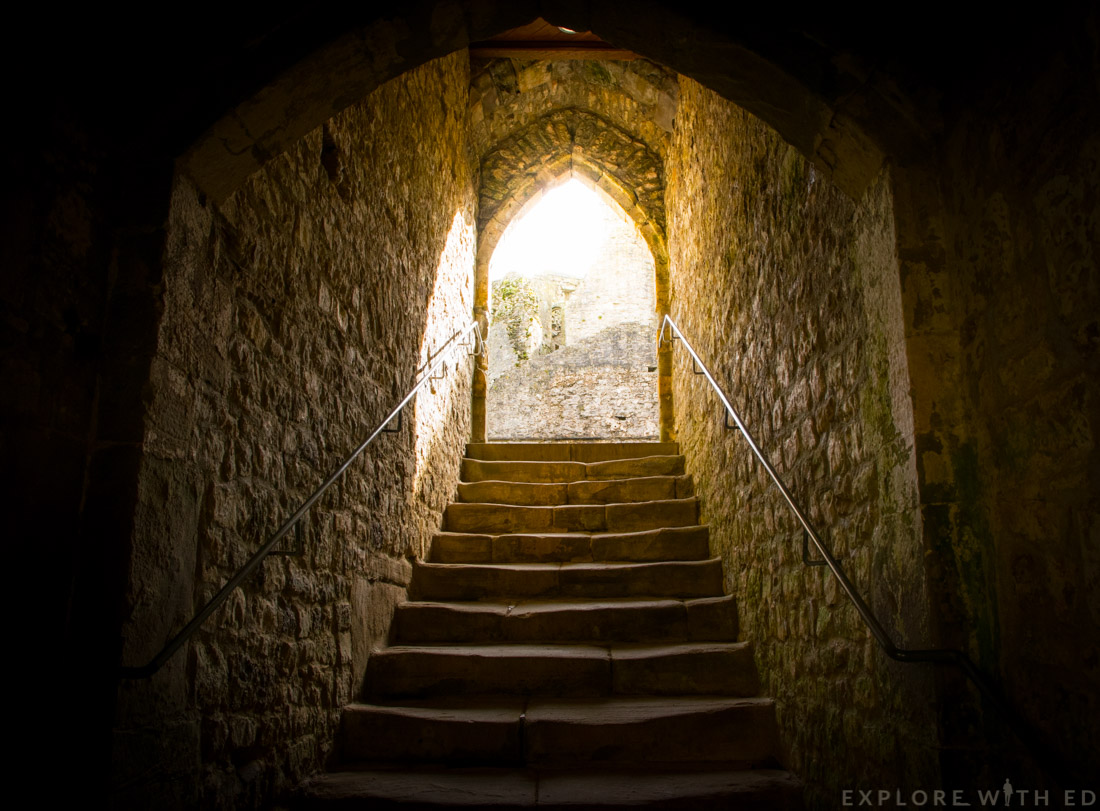 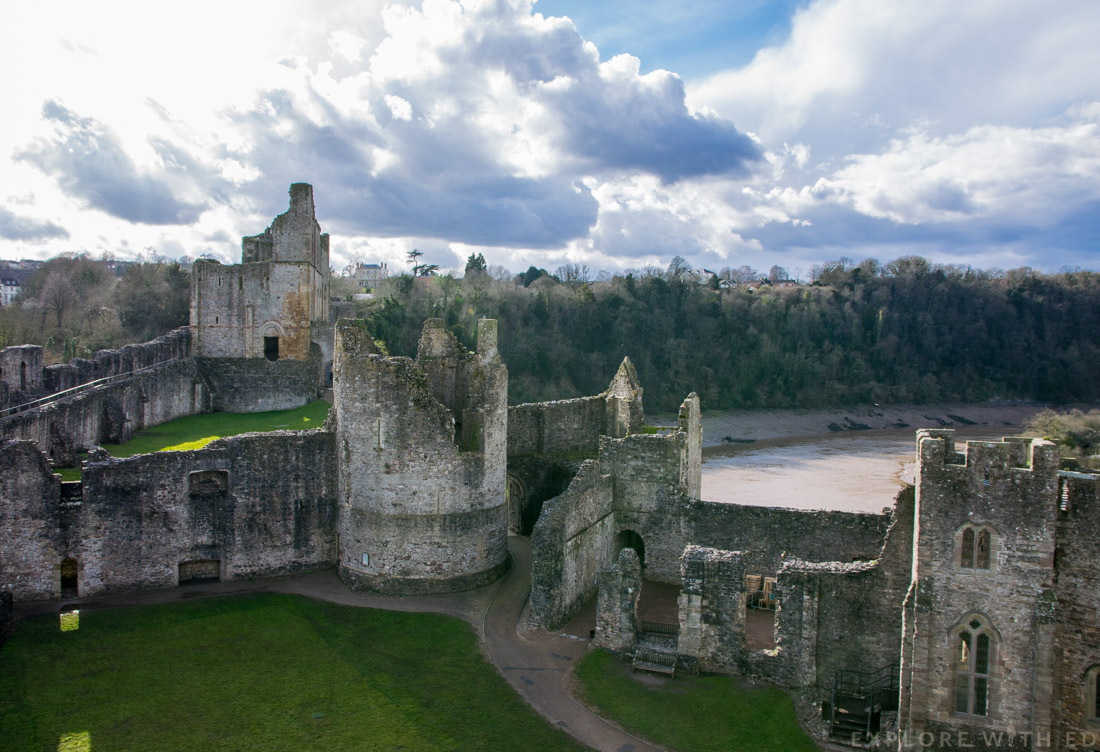 I’d highly recommend taking a Real Wales Tour after my experience. Even if you’re a local like me who’s familiar with the country, Nia was very knowledgable and made learning more about places I’ve known since childhood a real pleasure. It’s also surprising to see how much there is on your doorstep that you never knew existed. The people carrier we travelled in for the day was comfortable and roomy with tinted overhead and side windows allowing in as much of the scenery as possible.

The company are able to offer language support for international guests (Spanish and French), as well as tailor-make your trip with additional overnight stays and activities like caving and wine tasting.
Diolch yn fawr for a fun day Real Wales Tours, click here to visit their website for information.

My tour was expenses paid by Real Wales Tours, however I was not obliged to write a positive review and all opinions are my own.