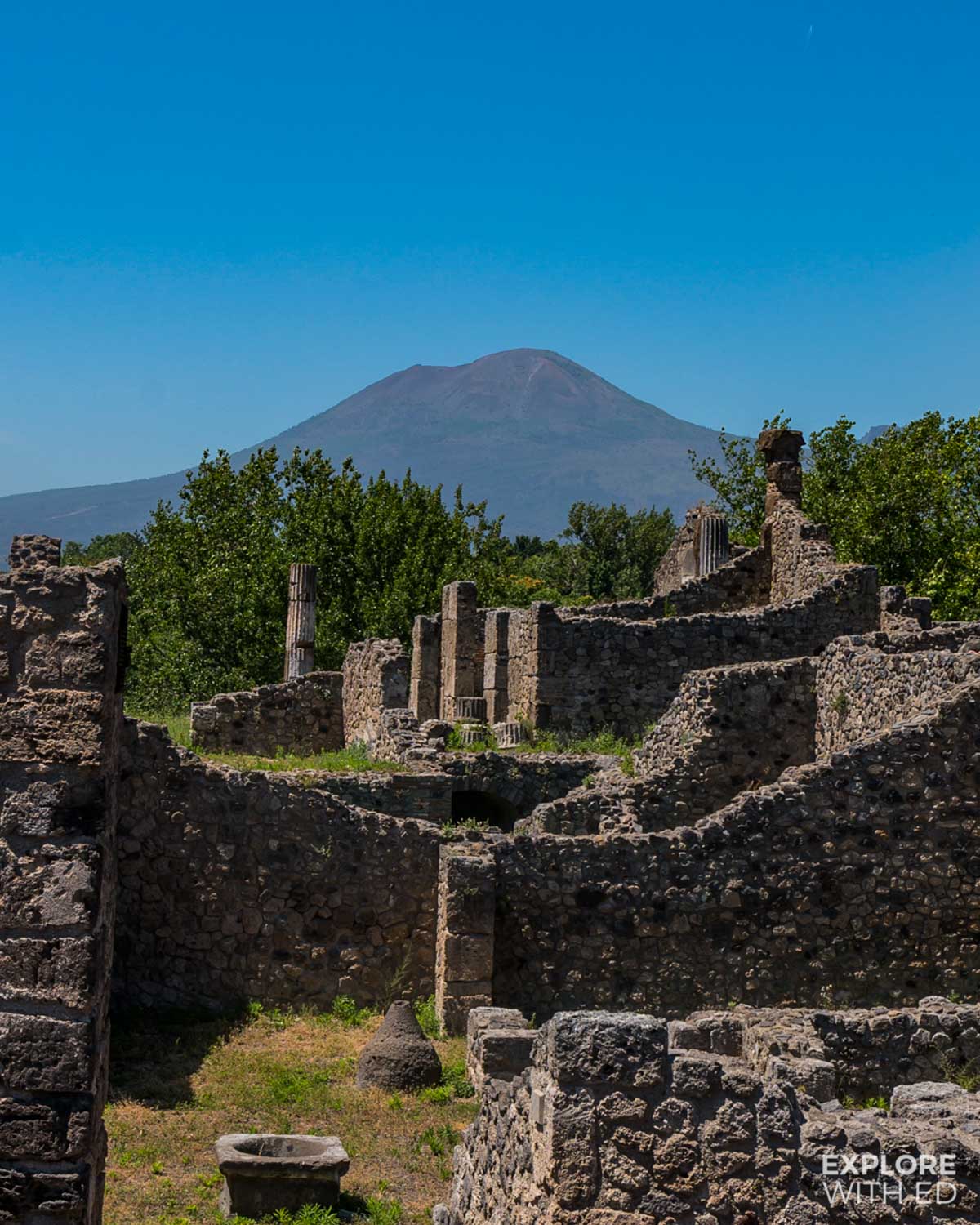 If you’re cruising or staying in Naples, a shore excursion to Mount Vesuvius and Pompeii will probably be top of your list of things to do. 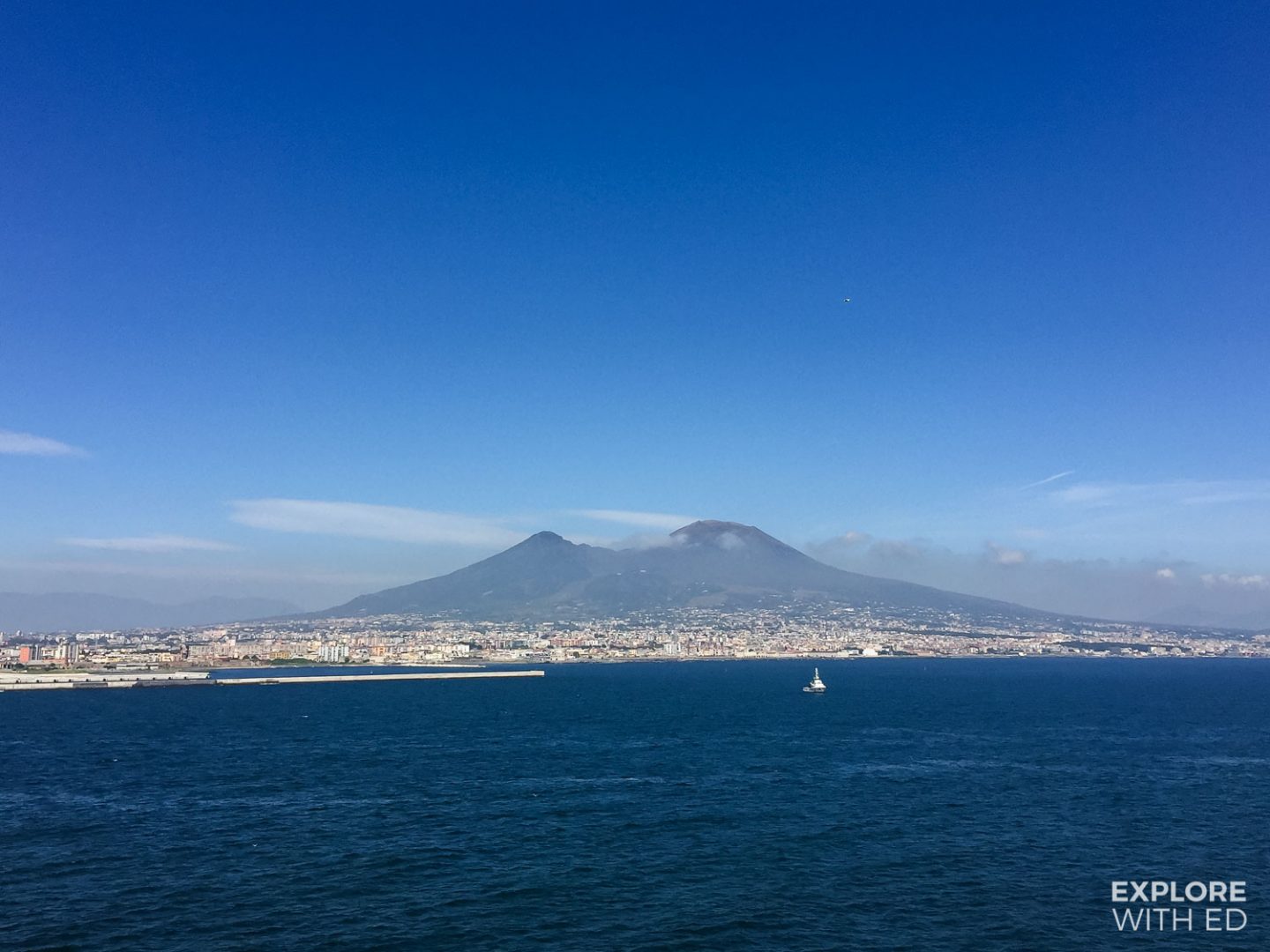 Dominating the skyline, the twin peaked volcano is one of the worlds most dangerous due to its proximity to Naples – a densely populated area of over a million people.
The ruins of Pompeii are a stark reminder of the destructive force of Vesuvius, though you may be surprised to hear its erupted as recently as 1944, but with far less devastating effects than the famous eruption of 79AD. 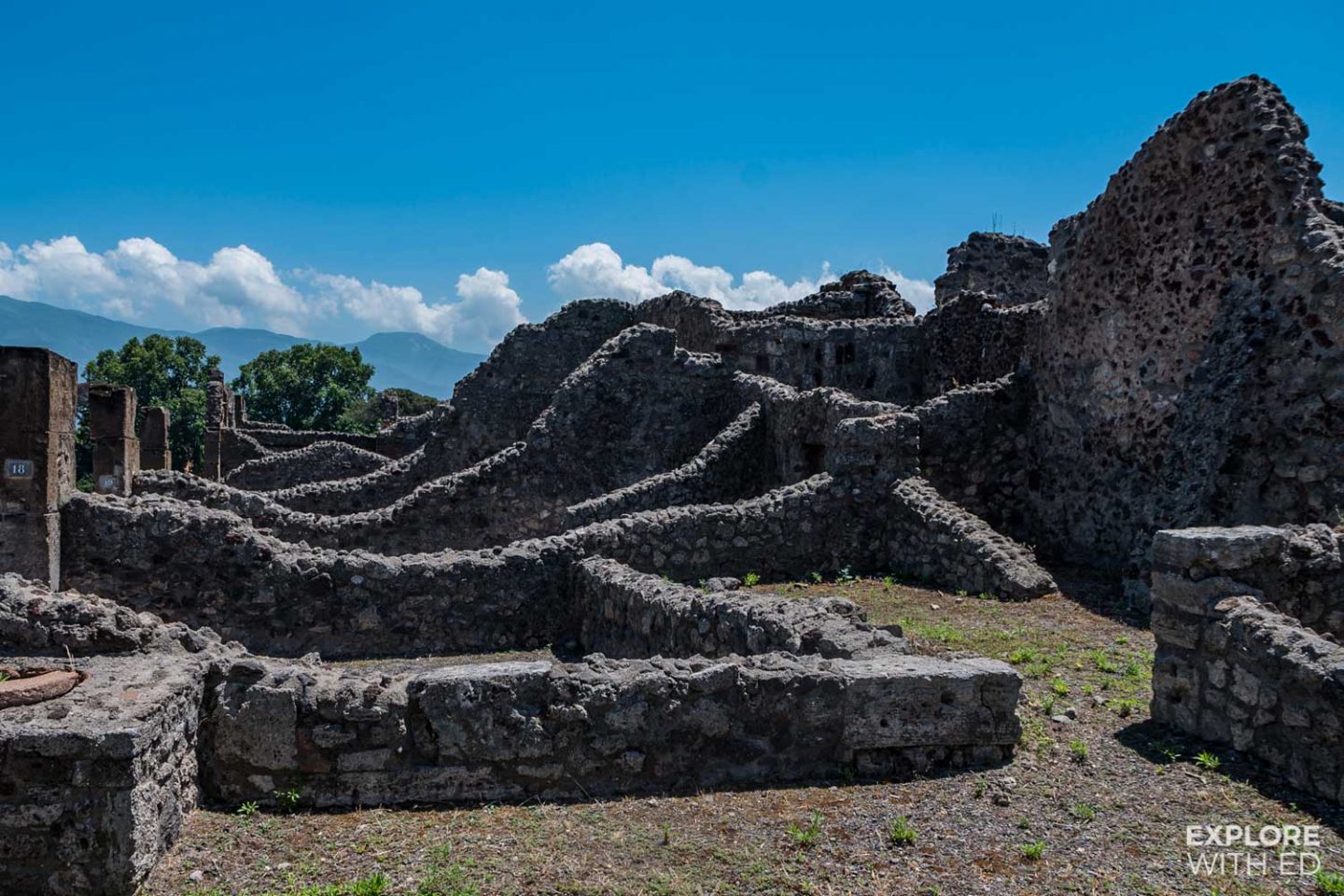 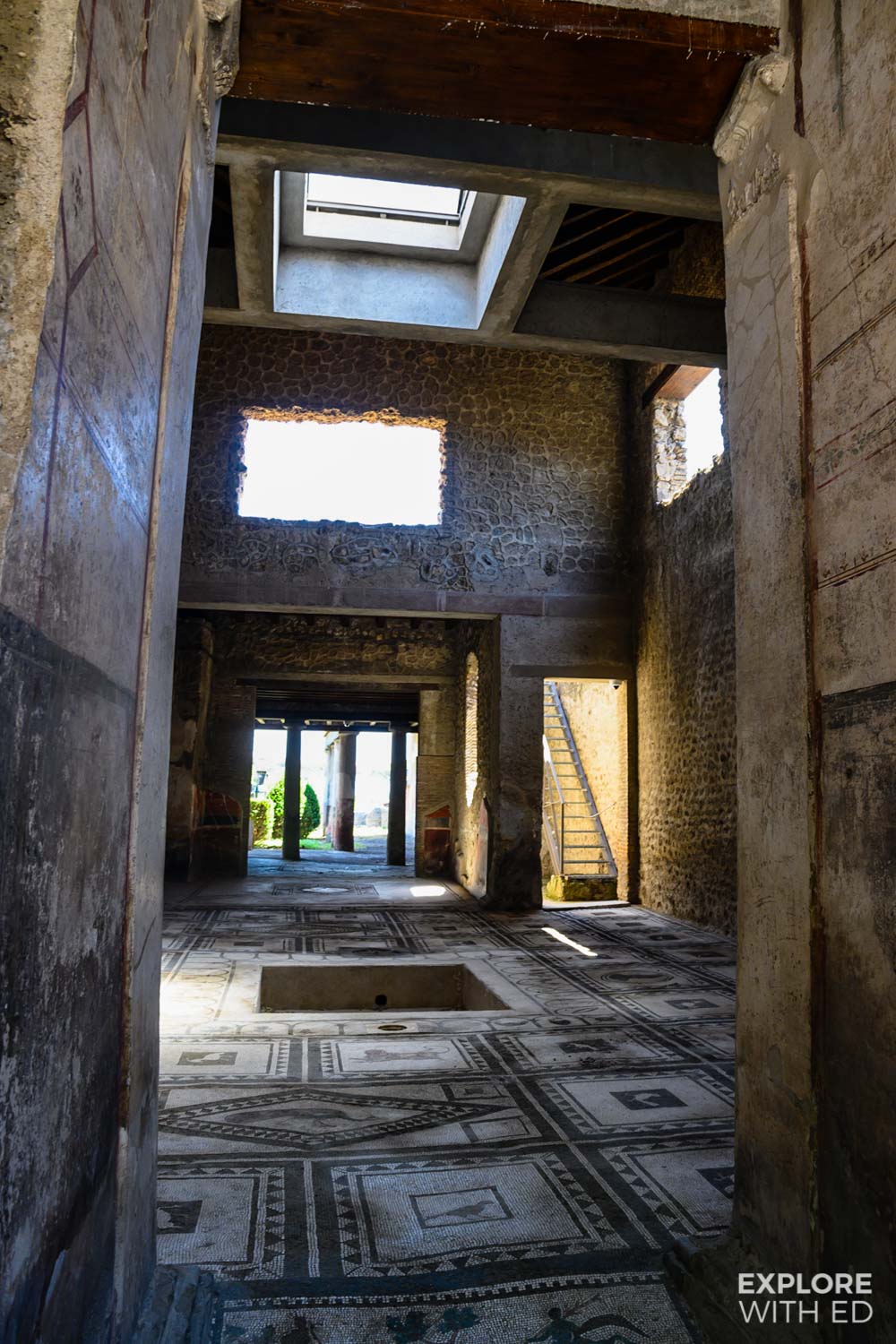 I booked my shore excursion to Vesuvius and Pompeii from the port of Naples with my cruise line, and most cruise ship companies will offer this excursion if you’re due to stop in Naples.
Even though this may be more expensive than using local public transportation or tour operators, you’ll likely have a guarantee of getting back to the ship in time for departure. 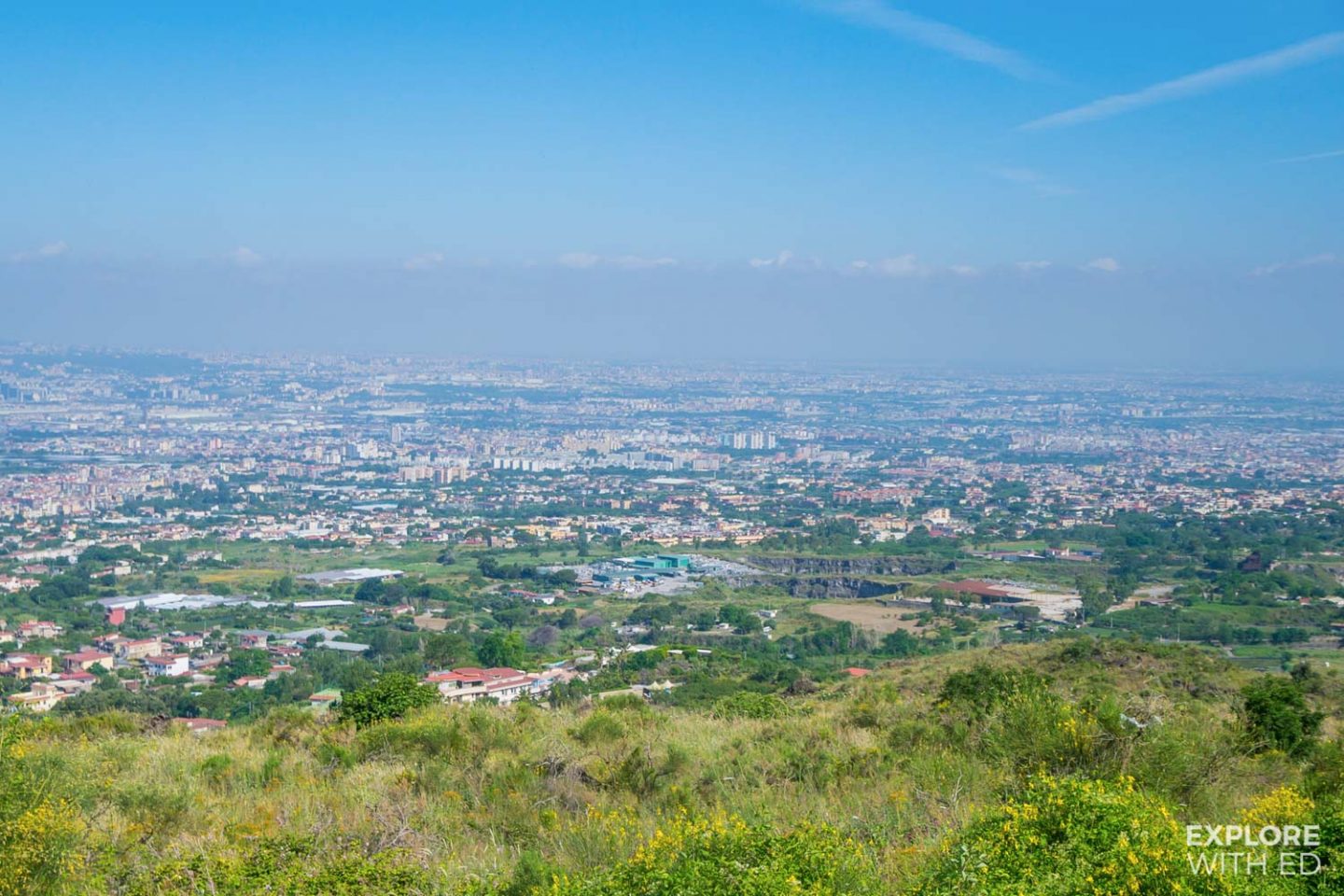 If you’re staying in Naples for a longer trip an all inclusive tour offered by Viator is quite similar. I was once invited by The Roman Guy to review one of their tours in Venice (which I thoroughly enjoyed), so it’s worth mentioning they also do Amalfi and Pompeii Tours.

Our Naples shore excursion began with a short stop in a cameo factory (with restrooms), where we saw firsthand local craftsman making intricate shell carvings and coral jewellery for customers across the globe. 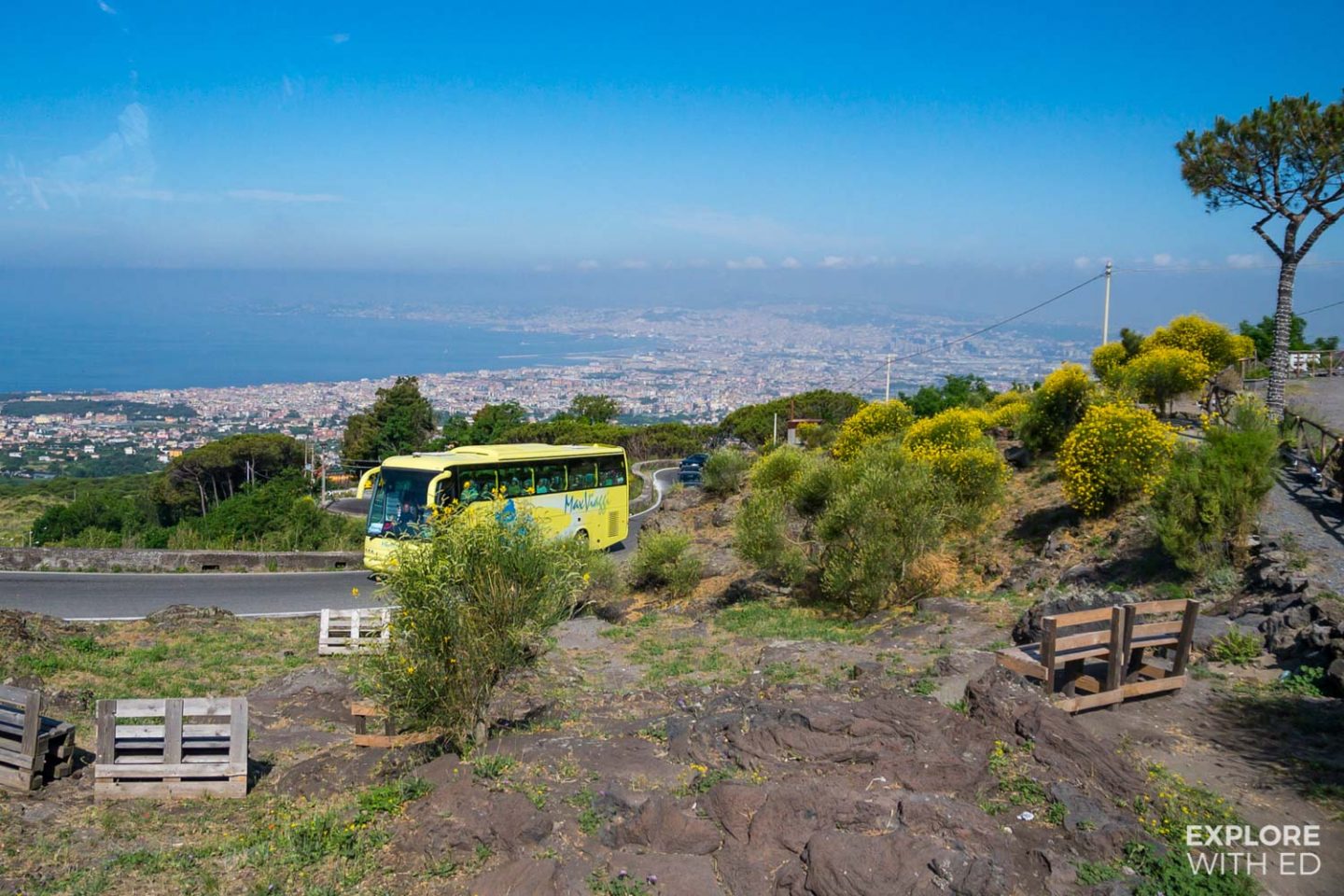 We then made our half an hour ascent up Vesuvius, the coach squeezed around tight hairpin bends and the vast city of Naples began to reveal its true scale below.

Related: Exploring the birthplace of the Olympics in Greece

Evidence of the most recent eruption was still prevalent – charred trees and blackened valleys slice through the fertile slopes around it. Arriving at the national park entrance felt otherworldly, almost Jurassic with misty clouds breathing down the jagged peaks. 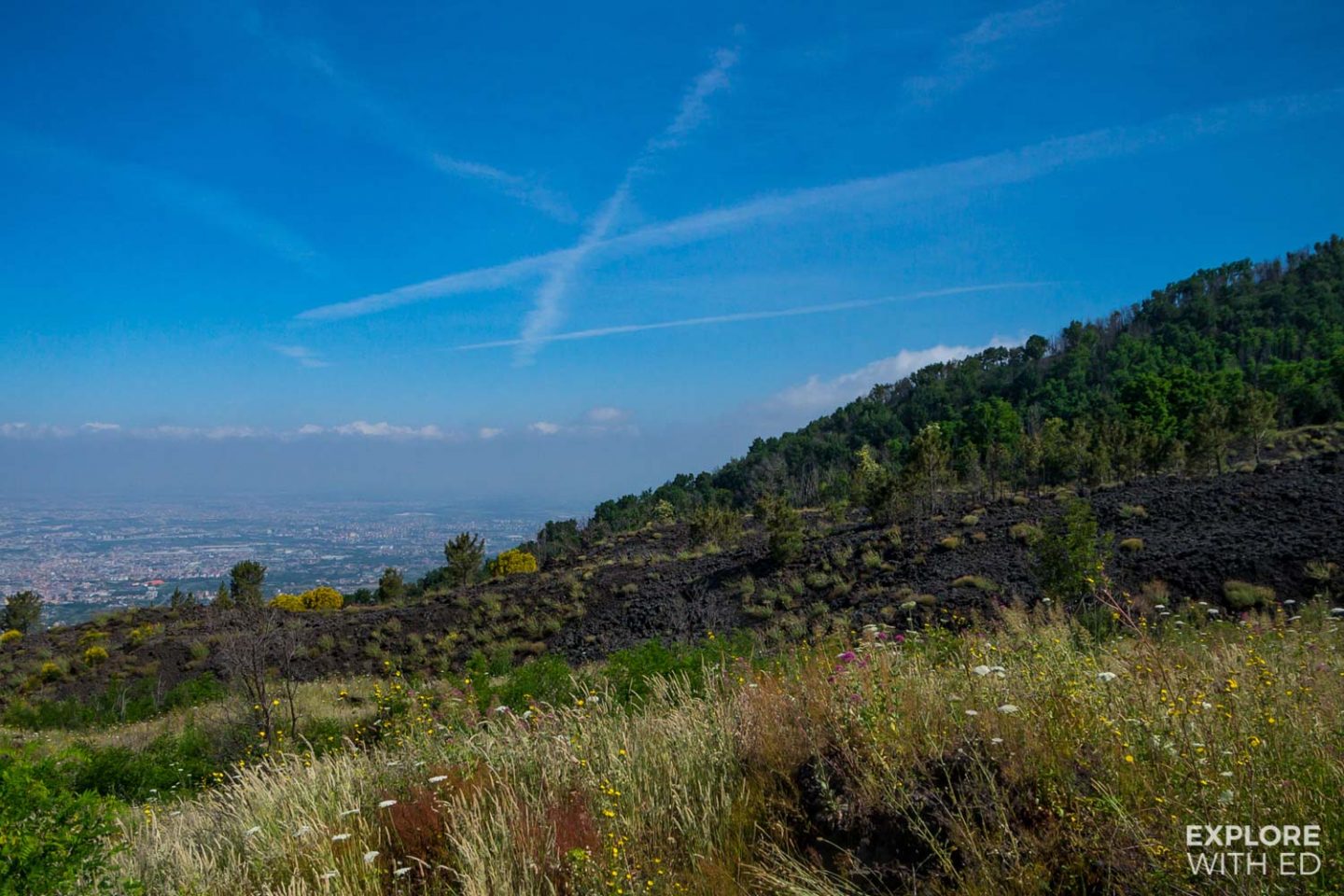 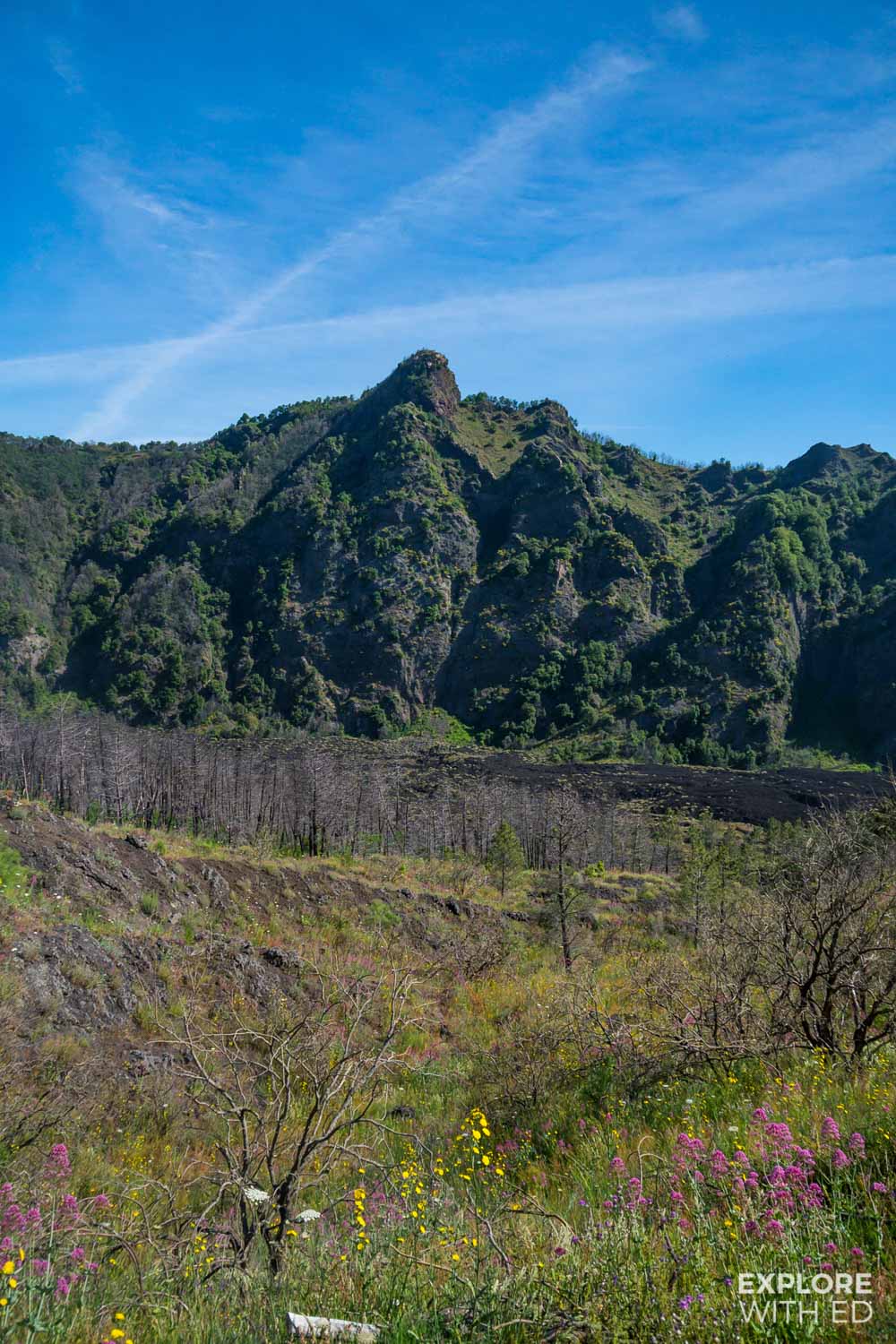 The hike up to the summit of Vesuvius takes about half an hour from the entrance, depending on your pace of course. 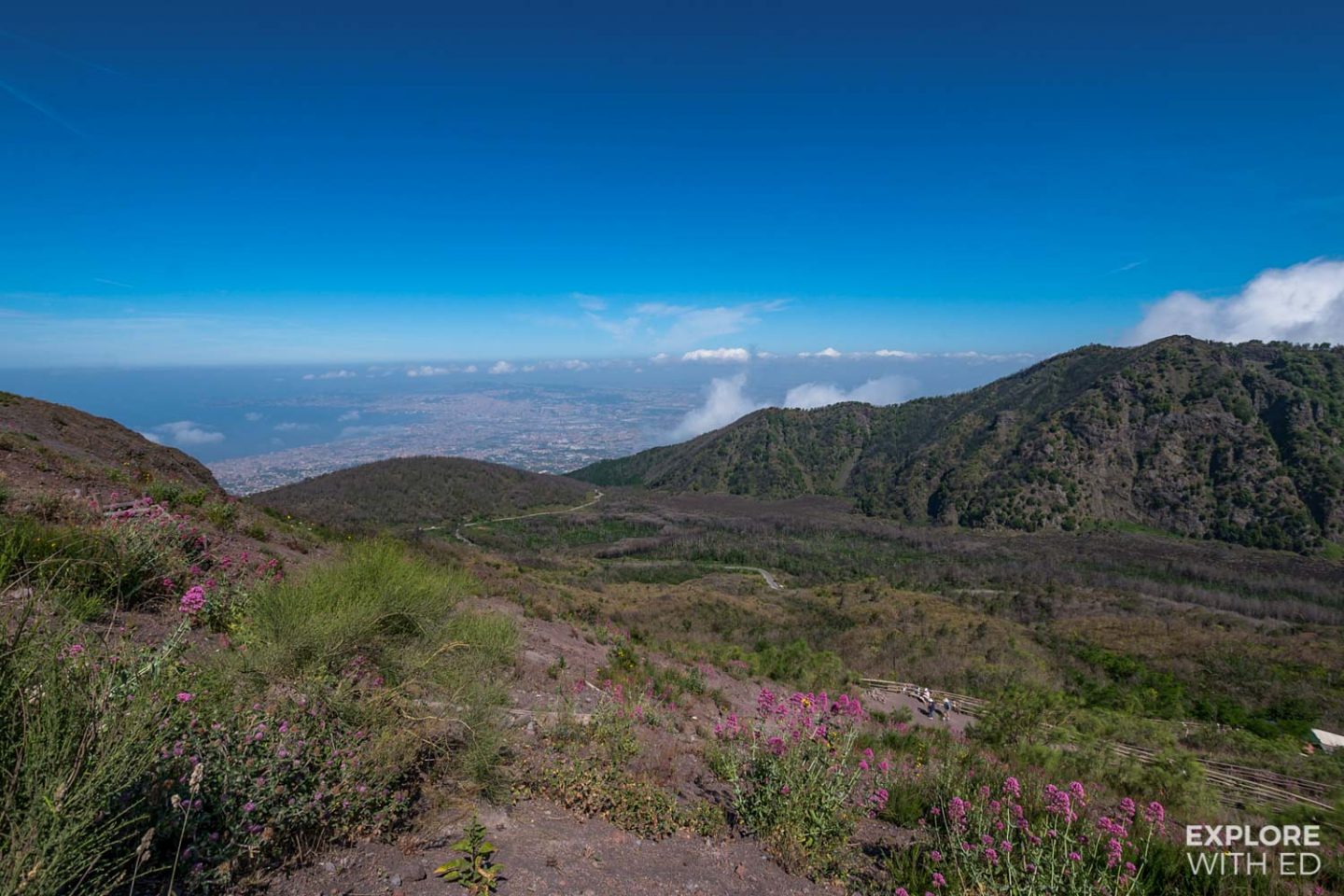 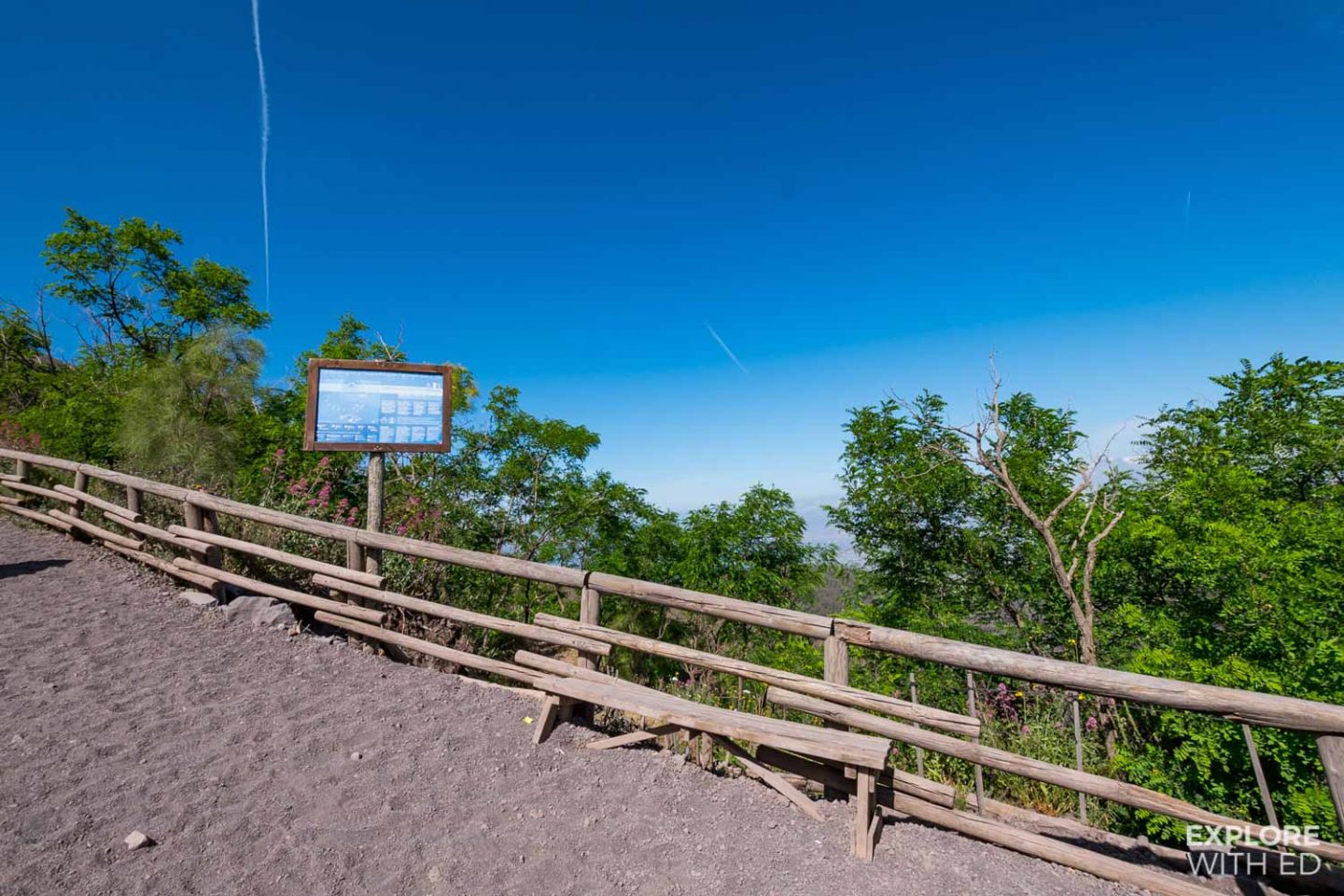 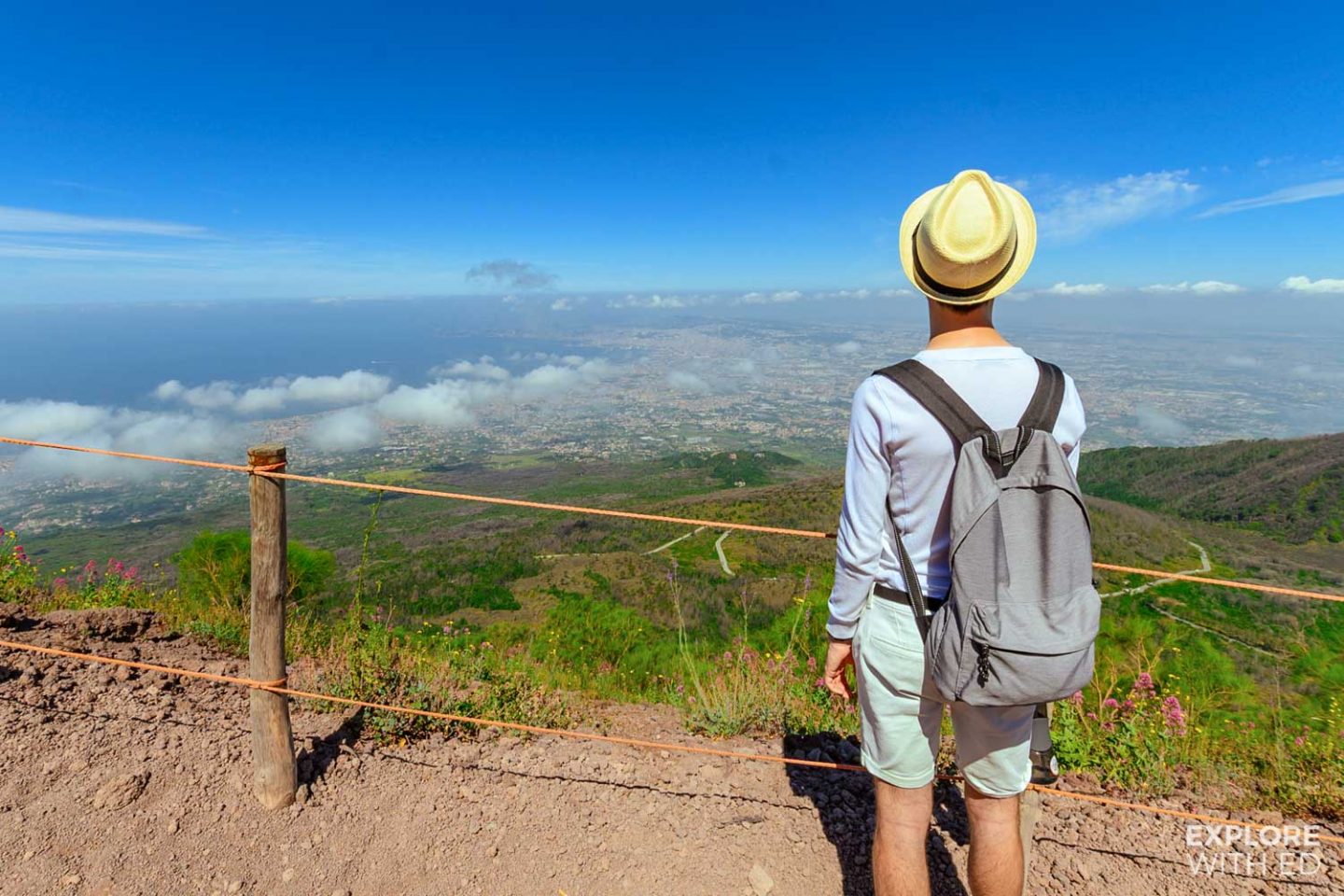 Vesuvius’s crater is incredibly vast, the Jurassic slopes we seen on our way up have been replaced by a dusty Martian landscape, dotted with space-like seismometers recording every vibration around the clock. 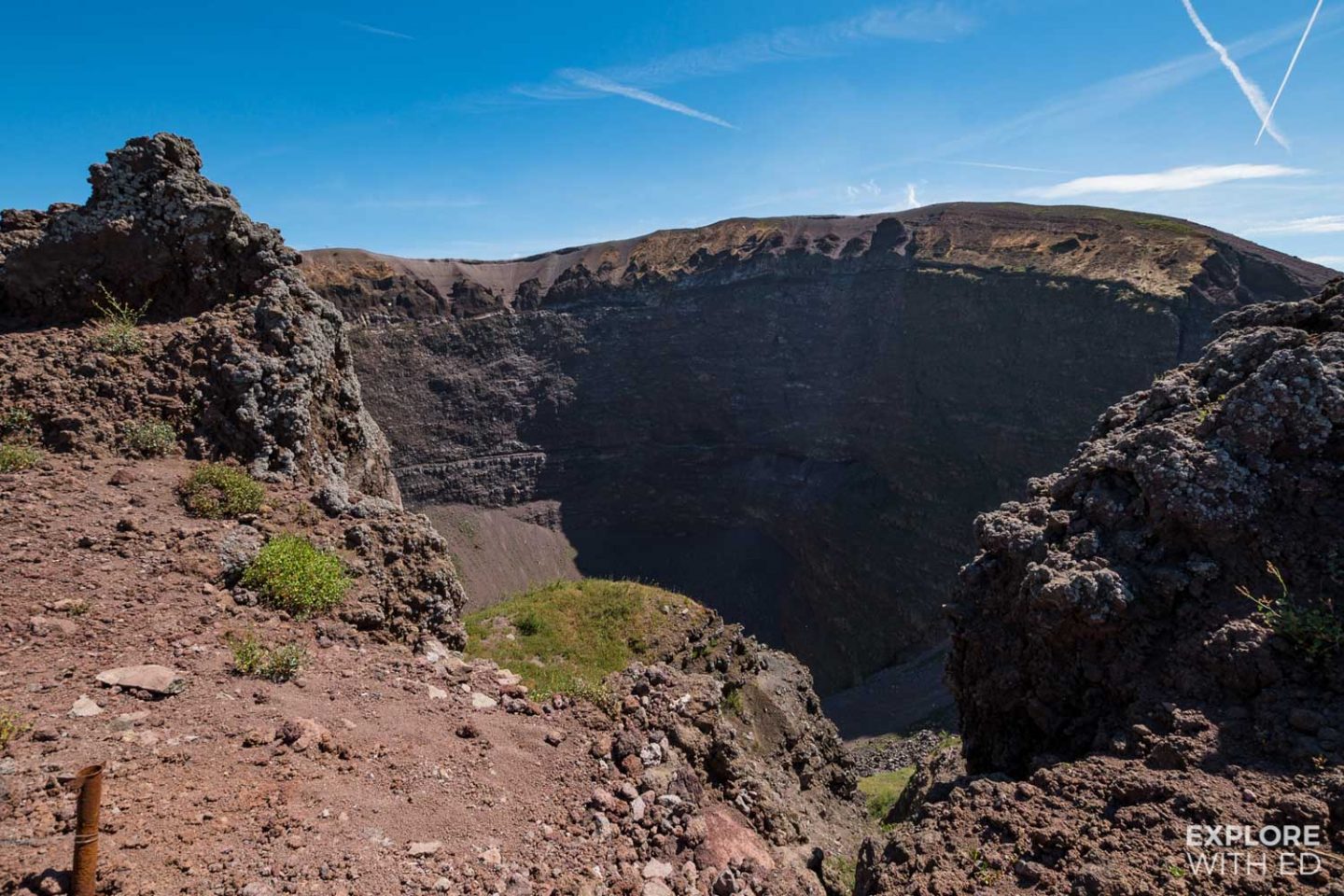 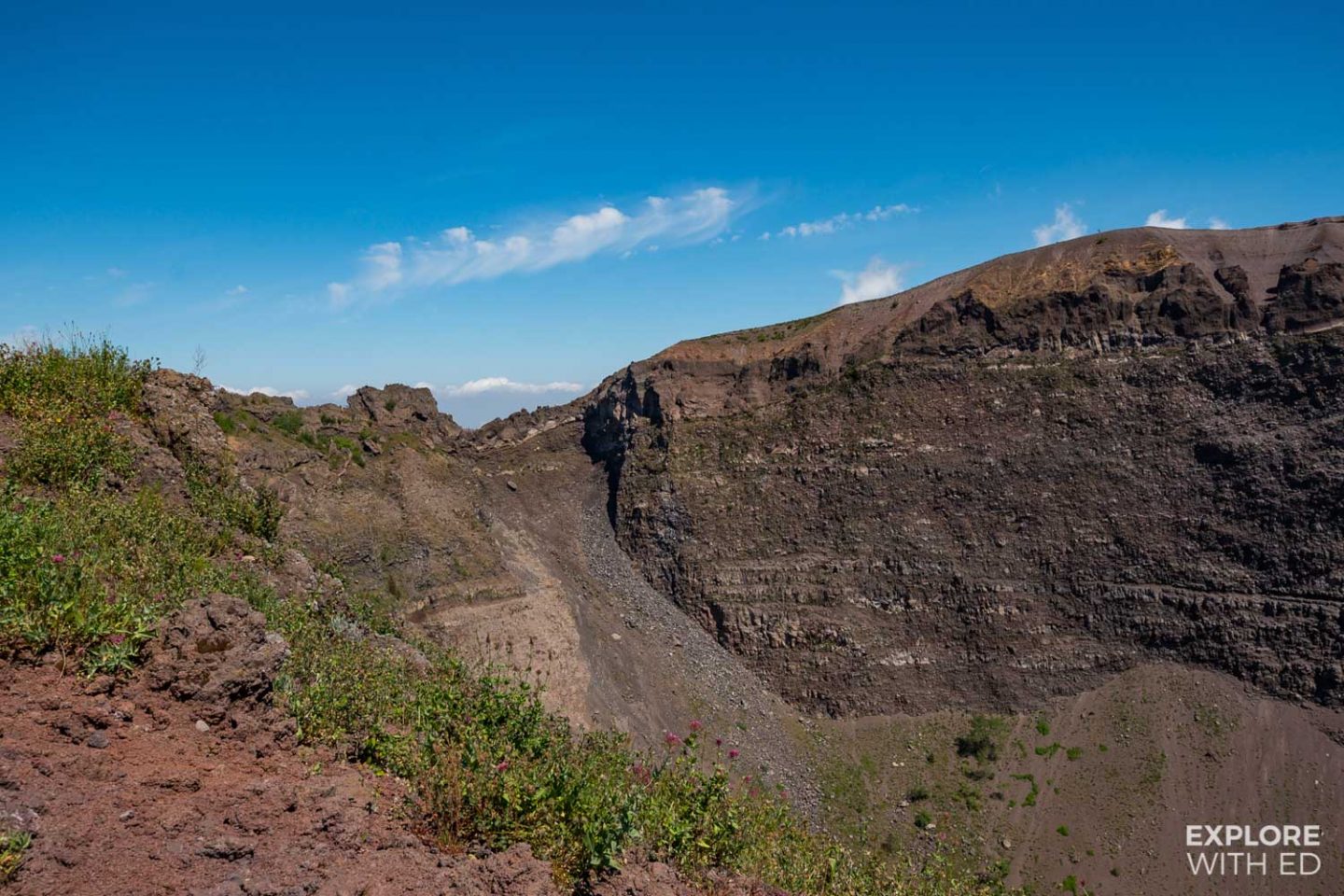 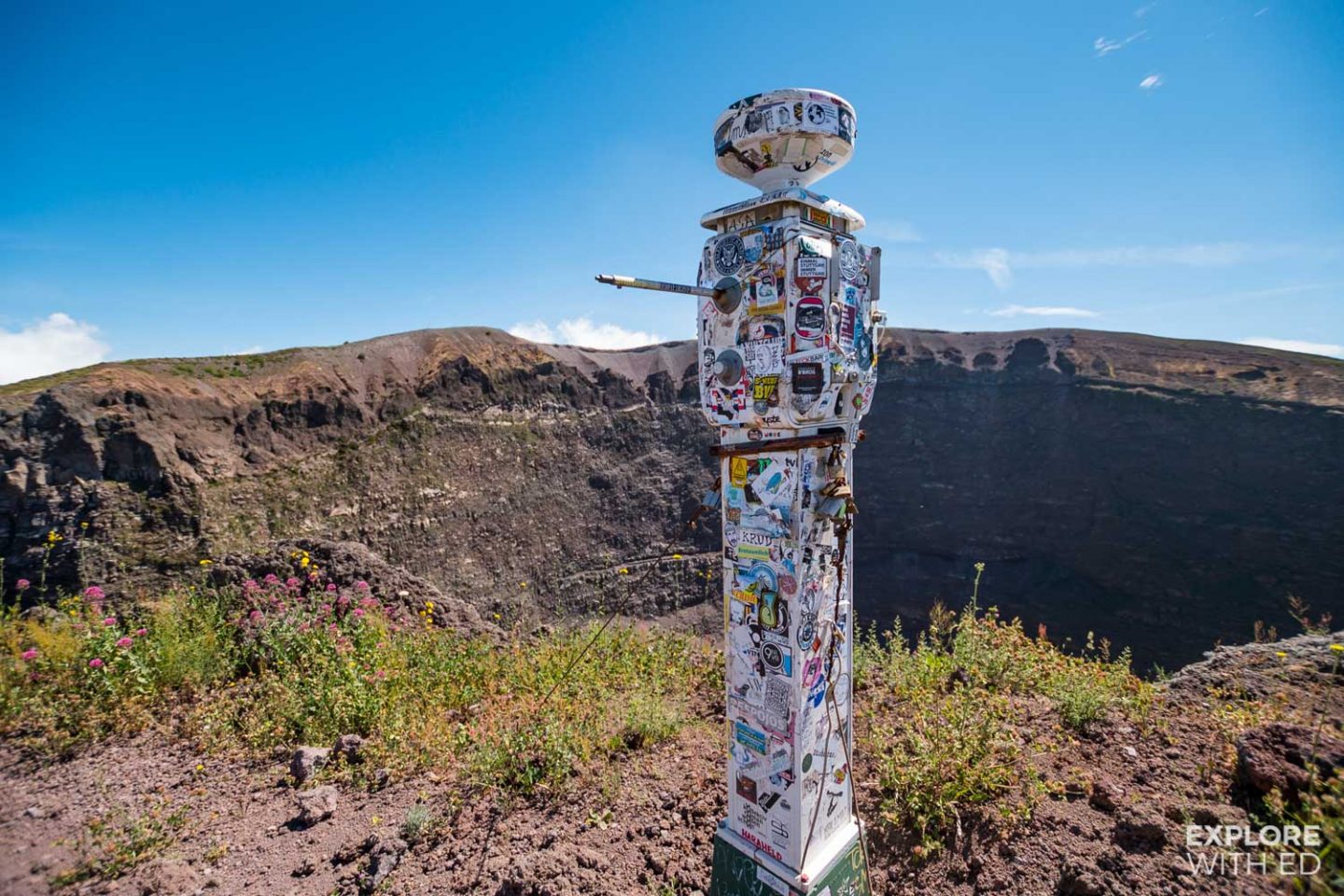 The panoramic views of Naples and the coastline (at 4,203ft) are outstanding, visibility was quite good on our visit, luckily, as the day before was overcast.
We were given around an hour and a half at Vesuvius, meeting our guide back at the entrance to continue our shore excursion to Pompeii.

Related: Exploring the charming village of Eze, South of France 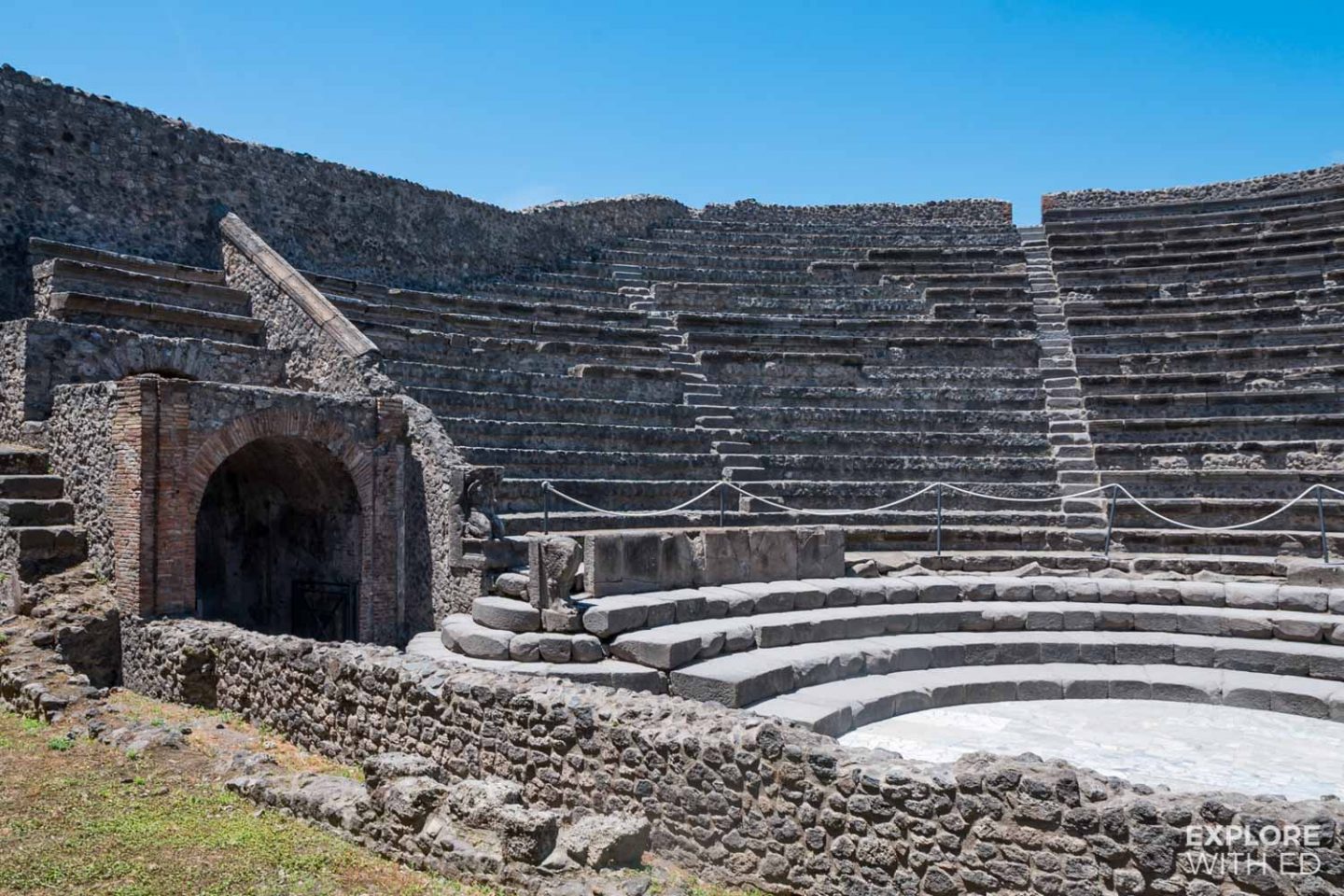 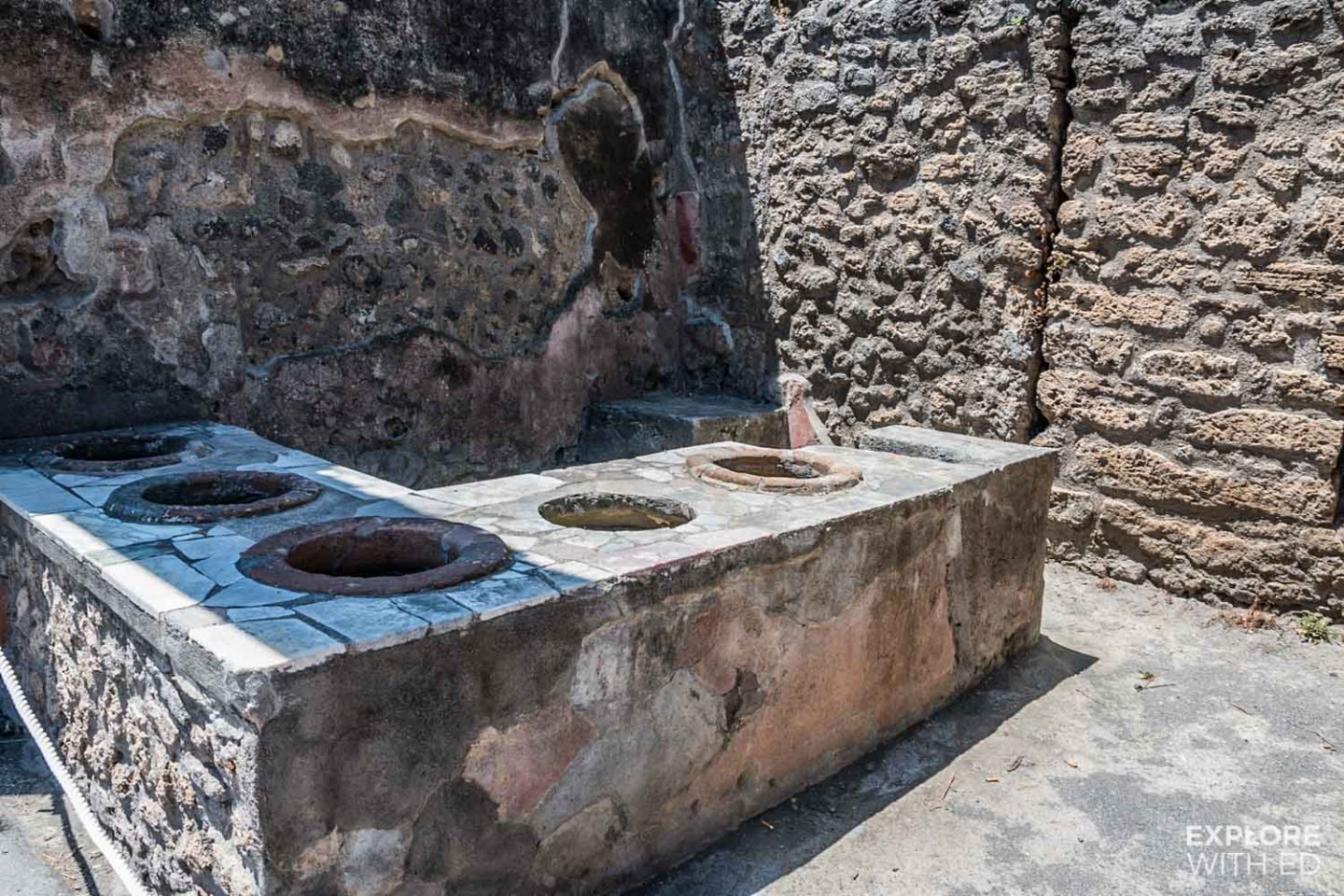 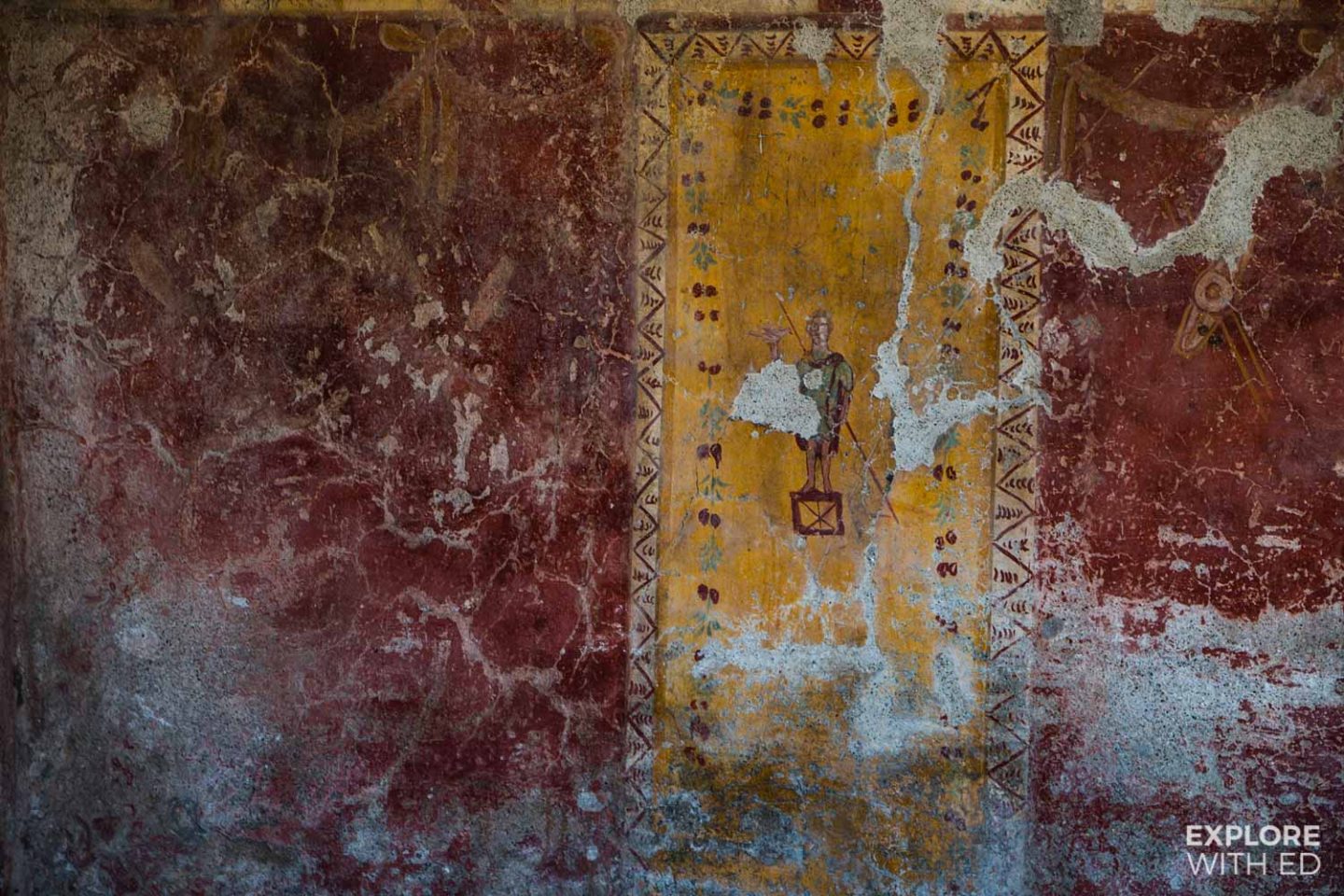 Our tour guide showed us around the ruins of Pompeii using a headset that we could listen to through an earpiece. We had a further hour in Pompeii, enough time to explore houses, bakeries, even fast food restaurants (yes you read that right) – some of which was remarkably intact with painted walls and ceilings and pottery left exactly where it was in 79AD.

Most of our time was spent along the Via dell’Abbondanza, one of ancient Pompeii’s main streets – you can still see the groves left in the cobbled road by the constant stream of traders with their horse drawn carts. 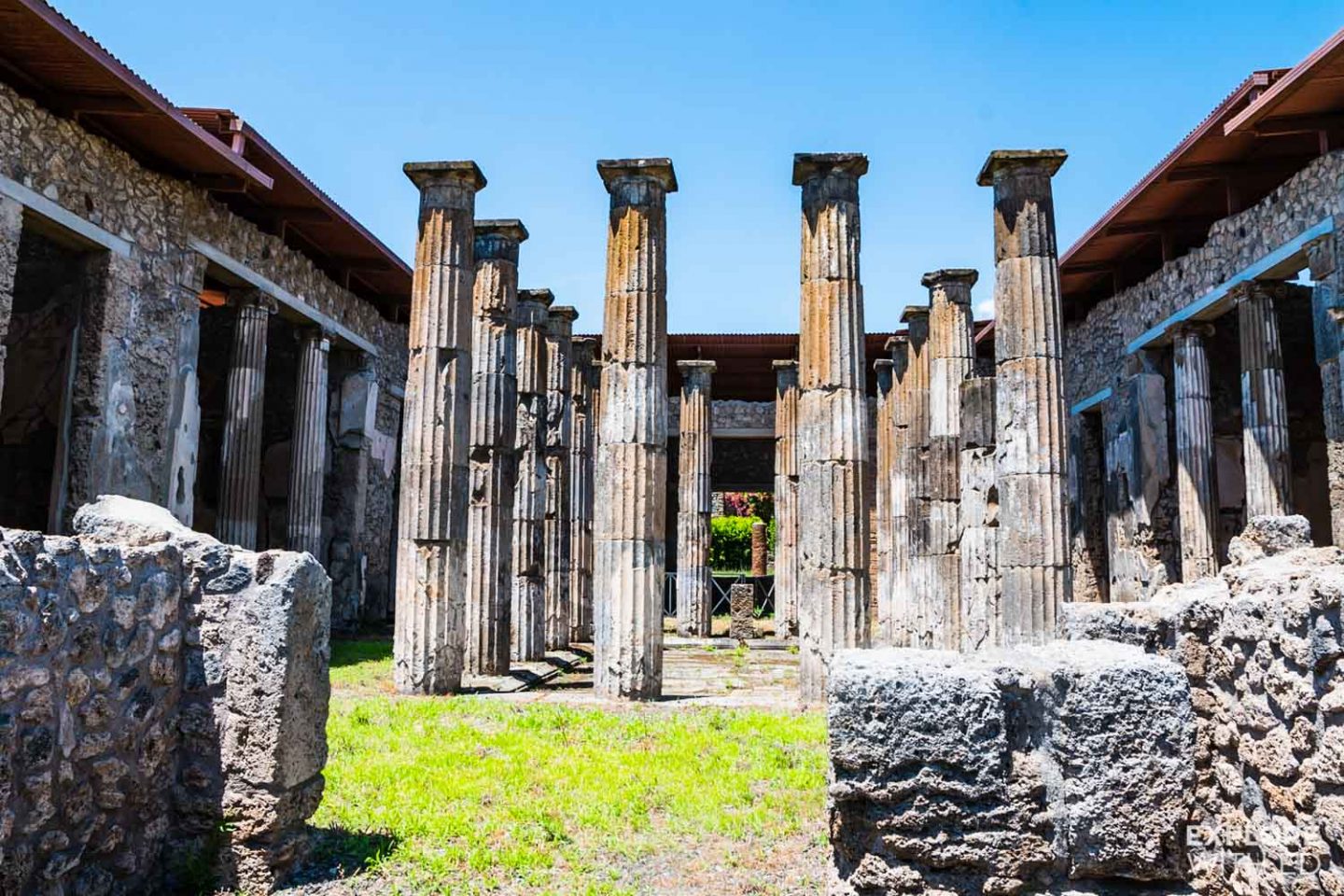 Before we left we seen some of Pompeii’s most famous remains, the casts of Pompeians, frozen in time during the deadly final phase of the eruption.
It’s a poignant and somber experience seeing how residents, including animals, met their tragic end, many of whom didn’t even know Vesuvius was a volcano. 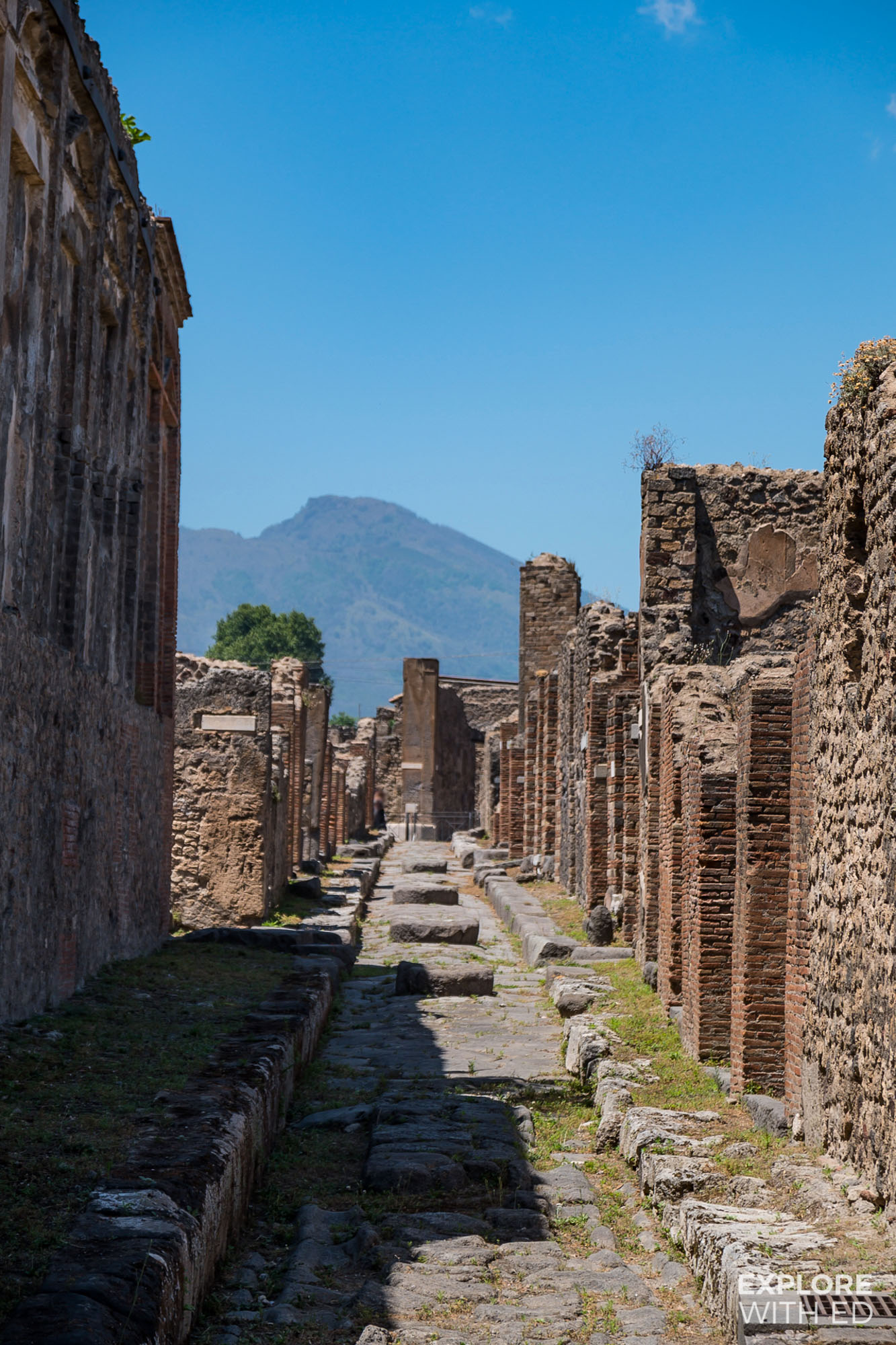 Pompeii was fascinating and I could’ve spent a lot longer exploring the whole town. I didn’t actually realise how large Pompeii is, the map I was given showed we had only scratched the surface.

Before and after exploring Pompeii we were given about 15 minutes to roam around a local street market – an ideal moment to enjoy a slice of margherita pizza (invented in this region), limoncello or gelato. This was at our own expense however we were provided with a drinks token to redeem an ice cold bottle of water. 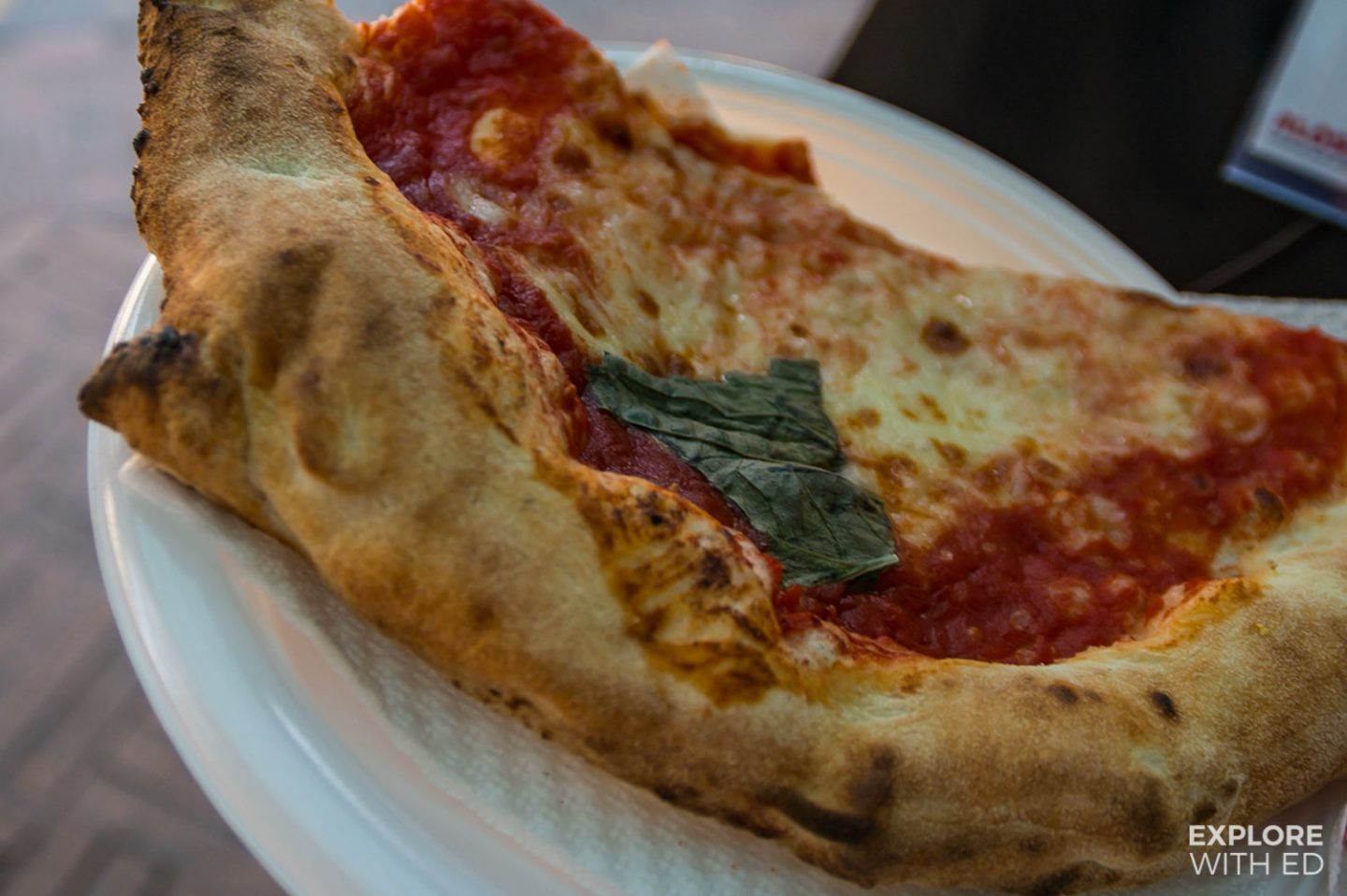 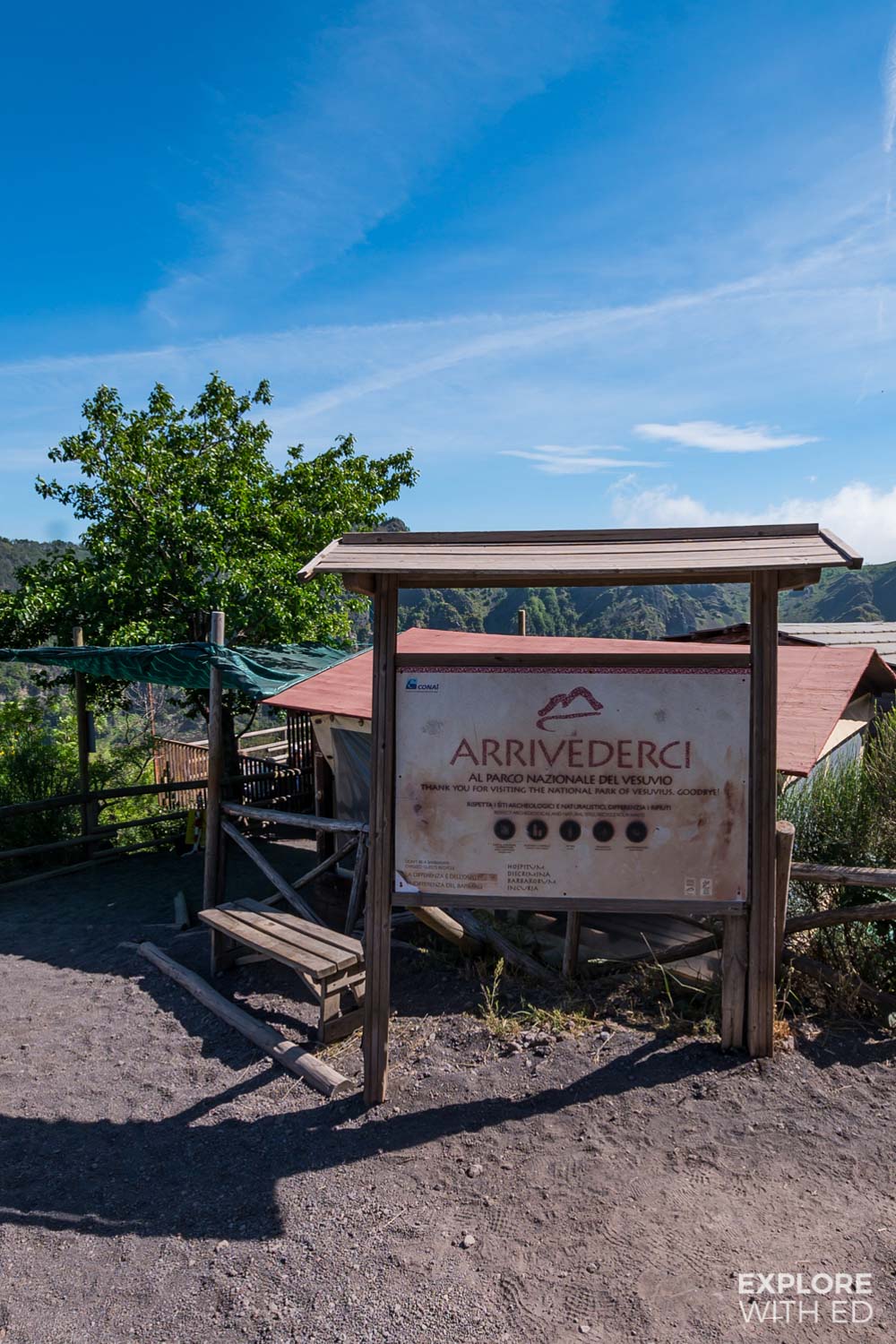 If you’re visiting Naples on a cruise and have already done a shore excursion to Vesuvius and Pompeii then you may wish to consider alternatives, such as a trip to Sorrento, the Amalfi coast, the island of Capri or indeed Naples itself.
This shore excursion was undoubtedly one of my highlights of an Italian Mediterranean cruise.

Planning a trip to Italy? Visit my country tag for more local guides and articles.